Molecular Psychiatry (2007) 12, 704–706& 2007 Nature Publishing Group Group-II metabotropic glutamate receptor ligands asadjunctive drugs in the treatment of depression: a newstrategy to shorten the latency of antidepressantmedication? Molecular Psychiatry (2007) 12, 704–706; affects synaptic transmission and neurotransmitter release by modulating membrane Ca2 þ and K þchannels.8 Subtype-selective ligands are now avail- Unipolar depression is a major public health problem able that either bind to the glutamate-binding domain and will be the second most prevalent cause of of mGlu receptors or interact with an allosteric site illness-induced disability by the year 2020 according acting as receptor enhancers or negative modulators.9 to the World Health Organization. There are several Drugs that inhibit group-I mGlu receptors (particu- antidepressant drugs that are effective and relatively larly the mGlu5 receptor antagonists, 2-methyl-6- safe, but they all require a long latency (usually 3–4 (phenylethynyl)-pyridine and ((2-methyl-1,3-thiazol- weeks) to improve depressive symptoms. This latency 4-yl)ethynyl)pyridine), inhibit group-II mGlu recep- seriously complicates the management of severely (3-(3,4-dichloro-benzyloxy)-2-amino-6-fluorobi- depressed patients, who are at high risk for suicide cyclo(hexane-2,6-dicarboxylic acid 6-heptyl ester during the early phases of treatment. Paradoxically, 2S-2-amino-2-(1S,2S-2-carboxycyclopropan-1- suicide attempts may even increase during the first yl)-3-(xanth-9-yl)propionate (LY341495)) or activate days of antidepressant medication because of the group-III receptors (1S,3R,4S)-1-aminocyclo-pentane- shorter latency of drug-induced psychomotor activa- tion. Fast-active drugs or adjunctive drugs that short- en the clinical latency of classical antidepressants propane(b)chromen-1-acarboxamide) are effective in will provide a major breakthrough in the treatment of animal models of depression, and, in same cases, depression. Recent evidence suggests that glutamate produce behavioral effects that are consistent with an receptors are potential targets for antidepressant drugs.1 These receptors are subdivided into two major We have focused on how mGlu receptors affect classes: (i) ionotropic glutamate receptors (i.e. alpha- neuroadaptive changes induced by classical antide- pressants. Initially, we found that a 21-day treatment N-Methyl-D-aspartate (NMDA) and kainate receptors), with the tricyclic antidepressant imipiramine in- which are ligand-gated ion channels; and (ii) metabo- creases the expression of mGlu2/3 receptors in brain tropic glutamate (mGlu) receptors, which are coupled regions that are implicated in the pathophysiology of to G proteins. NMDA receptor antagonists produce depression, such as the hippocampus and nucleus beneficial effects in animal models of depression,2–4 accumbens. One of the established functions of these but their potential use in humans is limited by their receptors, that is their synergistic activity with strong impact on excitatory synaptic transmission, mGlu1/5 receptors in stimulating PI hydrolysis, was which results in serious adverse effects, such as enhanced in hippocampal slices isolated from ani- sedation, ataxia and impairment of learning and mals treated with imipramine.12 We reasoned that the memory.5 Drugs acting at mGlu receptors should offer upregulation of mGlu2/3 receptors could contribute a better profile of tolerability because these receptors to the overall process of neuroadaptation to antide- ‘modulate’ rather than mediate synaptic transmission pressants, and addressed this issue by monitoring the in the central nervous system.6,7 mGlu receptors form downregulation of b-adrenergic receptors in mice a family of eight subtypes subdivided into three treated with imipramine for up to 21 days. Interest- groups on the basis of their amino-acid sequence, ingly, the latency required for the downregulation pharmacological profile and transduction mechan- of b-adrenergic receptors in the hippocampus was isms. Group-I mGlu receptors (mGlu1 and mGlu5 shortened from 21 to 14 days when imipramine was receptors) are coupled to Gq, and their activation combined either with low doses of the mGlu2/3 stimulates polyphosphoinositide (PI) hydrolysis lead- receptor agonist, (À)-2-oxa-4-aminobicy-clo(exhane- ing to mobilization of intracellular Ca2 þ and activa- 4,6-dicarboxylic acid (LY379268) (0.5 mg/kg, intra tion of protein kinase C. Group-II (mGlu2 and mGlu3) peritoneally (i.p.)), or with the preferential mGlu2/3 and group-III (mGlu4, mGlu6, mGlu7 and mGlu8) receptor antagonist, LY341495 (1 mg/kg, i.p.).13 We receptors are all coupled to Gi/o proteins. Their interpreted these findings by speculating that low activation inhibits cAMP formation and indirectly doses of LY379268 activated a subset of mGlu2 or 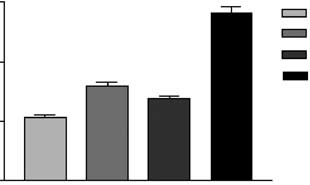 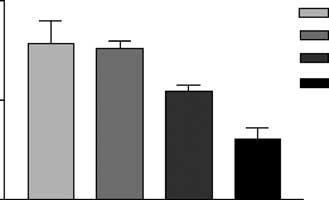 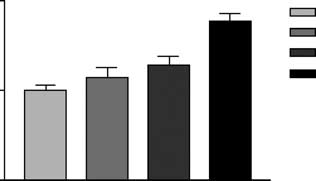 Fluoxetine combined with metabotropic glutamate 2/3 receptor agonist, LY379268, increases cell proliferation (a) and neurogenesis (b) in cultured cerebellar granule neuroprecursors. Primary cultures of rat cerebellar granule cells wereprepared from 6–7-day-old rat pups and grown in serum-free neurobasal medium, supplemented with 10 ng/ml EGF and20 ng/ml bFGF (Zusso et al., 2004). Ten days after plating, putative granule cell neuroprogenitors, identified as round-shapedcells, were isolated, replated and treated for 72 h with fluoxetine (10 nM), LY379268 (1 nM), or the two drugs in combination.
Cell proliferation was assessed by counting the cells immunoreactive for 5-bromo-20-deoxyuridine (BrdU, applied 24 h beforeat the concentration of 10 mM). For assessment of neurogenesis, cells were re-plated in poly-L-lysine in medium deprived ofmitogens and containing 10% fetal calf serum. Neurons were identified by the expression of b-III-tubulin using TuJ1antibodies (1:100). Values were counted in three random microscopic fields/per dish and are means7s.e.m. of 4–6determinations. *P < 0.05 vs controls (one-way ANOVA þ Fisher’s PLSD). In (c), a 3-day of treatment with chlorimipraminecombined with LY379268 induces a substantial decrease of total immobility time in forced swim test in FSL rats. FSL ratswere treated with saline, chlorimipramine 10 mg/kg i.p., LY379268 0.5 mg/kg i.p., or the two drugs in combination once dailyfor 3 days. A standard 5-min test was performed 24 h after the last injection. Time values are expressed as seconds, and aremeans7s.e.m. of six animals per group. *P < 0.05 (one-way ANOVA þ Fisher’s PLSD) vs rats treated with saline.
mGlu3 receptors producing functional effects similar latency of action if mGlu2/3 receptors are activated at to those resulting from an overall receptor blockade with LY341495, or, alternatively, that the antagonist Taken together, these data raise the attractive LY341495 could recruit additional receptor sub- possibility that mGlu2/3 receptor ligands (either low types.13 Currently, we are examining the combination doses of agonists or antagonists) may be used as between LY379268 and antidepressant drugs both adjunctive drugs to shorten the latency of antidepres- in vitro and in vivo. We are using cultured cerebellar sant medication, provided that these drugs will also granule cell neuroprogenitors as an in vitro model show a good profile of safety and tolerability, as can of antidepressant-induced neurogenesis14 (see brief methods in the legend in Figure 1). In these cultures,low synergistically with the selective serotonin reuptakeinhibitor, fluoxetine, in enhancing both cell prolifera- Supported in part by the Swedish Medical Research tion and neurogenesis (Figure 1a and b). In vivo Council Grant 10414 to AAM. LY379268 was a experiments were carried out using Flinders-sensitive generous gift from Eli-Lilly Research Laboratories line (FSL) rats, which show spontaneous ‘depressive’ symptoms, including an increased immobility time inthe forced swim test.15 The exaggerated immobility is F Matrisciano1,2, I Panaccione1, M Zusso3, P Giusti3, reduced by a chronic, but not subchronic, treatment R Tatarelli2, L Iacovelli1, AA Mathe´4, SHM Gruber4, with antidepressants.16 A 3-day treatment of FSL rats with either chlorimipramine (10 mg/kg, i.p.) or LY379268 (0.5 mg/kg, i.p., once daily) produced only Pharmacology, University of Rome ‘La Sapienza’, small effects in the forced swim test. However, a Piazzale Aldo Moro, Rome, Italy; 2Department of combination of the two drugs for 3 days substantially reduced the immobility time (Figure 1c), supporting the hypothesis that antidepressants have a shorter Molecular Psychiatry

8058 Foodhouse internal 30/1/09 2:43 pm Page 3 Healthy Eating Policy healthier eating. Research into health and diet OCS Statement on Healthy Eating continues to confirm what we already know - ignoreOCS Catering have put together some statements on● To ensure that our consumers have the fad diets and follow key pointers to reduce the riskhealthy eating and it’s affect on working perf