AMLA Natur Vertriebs GmbH Buko Hartmann, Geschäftsführer Schulstr. 38 D-21224 Rosengarten Dear Mr. Hartmann, As the author of the lines taken from the website of the EUAA and cited in the Amla-Newsletter I would like to clarify a few points. The petition, which you rightfully criticise, has neither been supported nor launched by the EUAA. Quite in the contrary we always said that it was based on wrong assumptions. We especially want to distance ourselves from the conspiracy theories mentioned by you, and we urgently ask you to clarify this with respect to the EUAA. Formulations such as “the profits of the poison brewers” are not our diction, and they are clearly not supported by the EUAA. You are citing us from a completely different context: We are pointing out that according to the actual EU legislation many Ayurvedic preparations stand a slim chance to be registered or even authorized as drugs. The reasons for this fact are also mentioned by you: especially the costs, the very high qualitative requirements, the restrictions with respect to the composition of the preparations and with respect to the indications. Here I do not see a contradiction between your and our position, and especially no reason for defamatory statements. Where we differ in our views is the question of the future availability of food supplements. When we wrote the comment for our website the plans for the implementation of the health claims still coincided with the end of the transition period for the traditional registration. This has by now changed, but not the perspectives. Meanwhile it became clear that 95 % of all claims for botanicals will be rejected, and that Ayurvedic preparations do not stand a chance to be granted an accepted health claim in view of the existing database and the extremely rigid requirements of the EFSA. At this place we get to a point where you misunderstand us: You are saying that the legal status of herbs in food supplements will not change on April 30. This is correct, and we never had any doubts with respect to this issue. There is, however, a difference whether a plant is an accepted constituent of food supplements, based on rudimentary positive lists (which are not even legally binding), or whether you want to market these preparations for a defined indication. What do you expect to claim on the packages of Amla or Brahmi in the future? These two would even not be too hard to register as traditional preparations (the costs notwithstanding). The situation is, however, different for the majority of Ayurvedic combinations. Shallaki 45: The qualities of frankincense have met the interest of science. This new extract contains 45% of standardised boswellic acid, which is researched for its anti-inflammatory effects. It is thus even more concentrated than the Bio Shallaki Extract 25. Anti-inflammatory effects are a health-related statement which will require an approved health claim, which the EFSA will not grant based on the existing data. At least in Germany the traditional registration would fail, as the indication is not OTC-compatible. With this example you can already see how difficult the practical handling will become in the future. Marketing without a health claim will in most cases not make sense. Alternatively pure wellness-related statements such as “well-being” (see the claims for Amla on your website) are likely to reduce the value of Ayurveda. European Ayurveda Association (EUAA) e.V.  In den Forstwiesen 27, D‐56745 Bell     Tel: 0049(0)26525 27756 Fax: 0049(0)26525 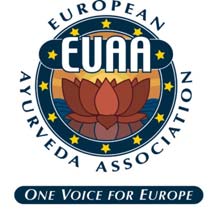 Specifically in Germany we are currently facing a new challenge: herbal constituents in food supplements shall be legally treated as food additives. The consequence would be an authorisation procedure, and thus another costly impediment for food supplements which would also have to be respected even if no health claim is used. Basically there are some details in your newsletter which require clarification. At least with respect to the situation in Germany the THMPD never aimed on cough- or bladder/kidney tea preparations. Principally, if these preparations already had drug status nothing would change (except for the sometimes difficult transfer of the traditional authorisation according to §109a to traditional registration according to §39a AMG). Such preparations were only then in the focus when they were food supplements with a clear medicinal indication. In such cases the Health Claim Directive does of course apply, or else the rules of drug authorisation/registration. As you rightfully say, the Ayurvedic preparations will still have to live with food status for a while. The EUAA just warns against being overly optimistic: We recognize that the marketing as food stuffs will come to its legal limits, be it just through the rejection of the health claims or through the legal classification as food additives. The situation in England cannot be compared with the situation in Germany: As opposed to Germany a high number of preparations were in fact registered in the UK – and even in indications which would not be considered eligible for registration in Germany. As experts in questions of drug registration we do clearly not warn against British conditions – quite in the contrary we welcome them as especially open-minded! Based on our personal experience we are convinced that a non-negligible number of Ayurvedic preparations could in fact be registered. The EUAA has advocated this way for a number of years, but to date not a single manufacturer has jumped to the occasion. There are solutions for the questions related to the costs of registration, this aspect should not be the limiting factor. In your newsletter you point out that the accepted indication of registered drugs will not be identical with what the physicians and health practitioners tell their patients. We think that securing the availability of the preparations should have priority over the more academic question of details related to the indication. An example from Western medicine is the differentiation of otherwise identically composed St. John’s wort preparations into products for the improvement of well-being and remedies against mild to moderate depression. In the end these are formal regulatory details with no real impact on therapy. Finally, you point to the ominous date of 30th of April 2011 with respect to the registration. The EUAA has never insinuated that a registration would only be possible until this date. This would in fact be completely wrong, as nowhere in the legislation there is a definition that a registration cannot also be submitted after this date. The door to registration is not closed. The “rabbit facing the snake” would therefore be those who still say that it is too late for a registration. With respect to the preparations which are not eligible for registration according to the actual legislation, the EUAA is intensively working towards an adaptation of the legal foundations to the realities. It would be nice to get support instead of unfounded hostilities towards our work. As the EUAA’s slogan “One voice for Europe” says, it would be advisable to speak with one voice on the political level. We are open and grateful for input at any time. Agitation against the politics of the EUAA as in your newsletter (and then even with citations completely taken out of their context) are not exactly helpful and will only damage our common cause. (Dr. Mathias Schmidt) Medical Director EUAA European Ayurveda Association (EUAA) e.V.  In den Forstwiesen 27, D‐56745 Bell     Tel: 0049(0)26525 27756 Fax: 0049(0)26525