Assessing the Potential Value of
Rare Metals in Urban Mines:
A Comparative Look at Korea and Japan
By JUNG Ho-Sung
Co-authored by KIM Hwa-Nyeon and CHOI Myeong-Hae
September 2011
I. The Rise of Rare Metals
Rare metals refer to metals which are scarce in the earth’s crust, or which are scarce because they are difficult to extract and process. Rare metals are also metals for which demand is high and likely to soar in the future. Included in the category of rare metals are rare earth elements. Rare metals include a group of 17 metallic elements (specifically 15 lanthanides), plus scandium and yttrium in the third elemental family of the periodic table. In Korea, 35 different types of metals, including rare earth elements, alkali metals and metalloids are designated as rare metals, while 31 and 33 types are listed as such in Japan and the US, respectively. Since the 2000s there has been rapid growth in world demand for high-tech products, along with fast economic growth in emerging countries and expanding investment in green industries by developed countries. Strong purchasing power, coupled with increasing income among the middle class in emerging countries (notably China and India) has spurred surging demand for high-tech products. Energy reduction strategies in developed countries have also stimulated purchases of cutting-edge technology products with high energy efficiency. At the same time, swift expansion of rare metal consumption has been accompanied by a steep increase in the number of high-tech goods which rely on rare metals for their light weight and high performance. In fact, the world’s average consumption of rare metals nearly doubled between 2003 and 2007, including a 1.7-fold increase in consumption of lithium, a 1.8-fold increase for niobium and a 1.9-fold increase for titanium. Dwindling Supplies are Pushing up Prices
Rare metals, as implied by the name, exist in nature only in scarce amounts. Supply is complicated because they are typically dispersed, and not often found in concentrated and economically exploitable forms, making extraction difficult and costly. As of 2009, the total amount of the world’s known rare metal reserves is estimated to be about 99 million tons, while annual production volume is limited to about 124,000 tons. China alone accounts for 96.8% of the world’s output of rare metals, which entails a heavy reliance for other countries on imports from a single nation. 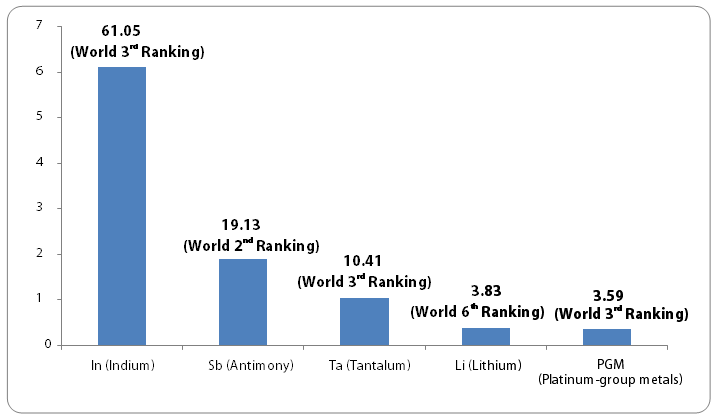 amounts of iron (1.2 billion tons), aluminum (600 million tons), and copper (380 million tons) in the form of urban mines. In rare metals, Japan’s reserves of indium, tantalum, and lithium are all ranked above 6th place in the world by reserve volume. Figure 2. Rare Metal Resources by Country
Source: National Institute for Materials Science (2008). “Japan’s Urban Mines Equal the Levels of Prominent Resource Exporting Countries.” Government Recycling Policies and Recycling Businesses of Local Authorities and
Private Companies
In Japan, the Home Appliances Recycling Law (Law for Re-commercialization of Specific Kinds of Home Appliances) took effect in April 2001. According to this law, the recycling of key components and materials recovered from waste home appliances has taken off, and the collection of e-waste thrown away from households and offices began in full swing. With the volume of collected e-waste increasing, the re-commercialization of metals concomitantly rose from 66.5% in 2001 to 84% in 2008. Recently, through a supplementary budget for fiscal 2010, the Japanese government announced policy directions to ensure stable supplies of rare metals: recycling, development of alternative materials, reduction of usage and supply chain diversification. In the case of urban mines, visible results have been made beyond collection to exporting through private-public cooperation between companies and local authorities which have set up a recycling system for rare metals. However, it is difficult to determine the exact scale of rare metals collected for recycling, because collection is mostly carried out by individual companies. In the meantime, “in-company mines” where a company recovers rare metals from defective products or new scrap generated during initial manufacturing and reuses them as production materials have become active. Yokohama Metal Co. appears to be a pioneer in recycling by extracting gold from discarded mobile phones. Shin-Etsu Chemical Co. meets 10% of its demand volume by collecting and recycling defective products and sheathing materials. Table 3. Current Status of Recycling of Main Rare Metals
Source: JOGMEC (2007). “Current Status of Recycling of Rare Metals.” Survey on Recycling and Recirculation of Rare Metals. pp. 51-84. IV. Implications
Most carmakers and electronic/electrical equipment manufacturers in Korea tend to use imported components and materials which contain rare metals rather than using rare metals as input materials in production of their finished goods. Hence, damage to the Korean economy caused by dwindling supplies has been limited. Since expansion of rare metal demand is inevitable however, the moves of supplying countries (particularly China, toward export restrictions and resource weaponization are likely to negatively) affect the Korean economy. When Japanese companies, as major component suppliers, reflect increased rare metal prices in their parts prices, import price growth in components and materials will put pressure on profits for Korean companies. Preparing for Supply Instability through Urban Mines
At present, 95% of Korea’s demand for rare metals is dependent on imports and the value of its total imports has shown an upward trend, with an average annual increase of 25%. In contrast, the entire amount of rare metals which can be extracted from Korea’s urban mines is equivalent to 12.3 times its total import volume in 2010. In view of current recycling rates for rare metals, however, stable supplies through urban mines do not look particularly promising. Nevertheless, a system of urban mines is expected to act as a cushion against abrupt supply disruptions that could occur in times of natural disasters or geopolitical conflicts. To maximize the potential value of rare metals with an estimated worth of about 33 trillion won, priority should be given to the investigation and removal of obstacles standing in the way of industry development. The government should also secure Korea’s urban mine stock of discarded resources by modifying recycling-related laws and reinforcing export restrictions on discarded resources. In the case of industrial waste, metals (excluding ferrous and non-ferrous metals) end up overseas or in landfills due to the lack of recycling technologies. The number of exported used cars, for instance, rose from 123,000 to 239,000 during the period 2003 to 2010. In this regard, it is necessary to impose restrictions on the indiscriminate export of discarded resources shipped overseas. Consideration needs to be made for measures to selectively reserve discarded resources if extraction of rare metals, which is not possible with current recycling technologies, becomes possible in the near future. Private-Public Cooperation and Selection and Concentration
As an advanced technology business, urban mining needs a system of role sharing and mutual cooperation between the government and companies in core technologies and types of rare metals. The government should concentrate its R&D investment in metals which have no accumulated technology at all, or for which commercialization is difficult, as technology development has not yet started. On the part of companies, efforts should be focused on rare metals for which development of commercialization technology has been completed up to a certain level, in order to enhance purity and develop substitution technologies. Companies should cooperate on technology development and innovation as well as on building a collection infrastructure, with the perspective of investing in promising future industries on terms other than immediate economic feasibility.5 In the future, the expansion of rare metal recycling is likely to be led by automobiles, LEDs, small household electronics and general home appliances, due to their huge volumes and easy extraction of metals in the context of urban mines. By component, secondary batteries and circuit boards contained in small household electronics are known to have high recycling efficiency rates in terms of volume and difficulty of extraction. Selection and concentration, therefore, should make the best use of these resources. 5 In particular, those companies manufacturing new growth industry products should also consider vertical integration through internalization of the related materials sector.

Grant Opportunities Eye On: Sexual Dysfunction I n both men and women,sexual dysfunc- For psychosocial causes of female SD, cessful penetration in 91% of subsequent tion (SD) may result from physical or psy-education and counseling may be effective. thorough evaluation. Often it is underreport-levels of estrogen and testosterone affected byphase III clinical trial of 440 men showed tha