Public Dollars for Private Profit
Taxmoxifen as a case study for how drugs developed at taxpayer-expense are sold to Americans at inflated prices to fuel corporate earnings Compiled by the Office of Rep. Bernard Sanders The NIH and Drug Industry Profits: An Overview
Right now, the federal government gives away billions of dollars worth of taxpayer-financed intellectualproperty to huge, profitable pharmaceutical companies.
The National Institutes of Health are the jewel of American science, producing lifesaving drugs of enormousvalue to our nation and the world. From 1955 to 1992, for example, 92% of drugs approved by the FDA to treatcancer were researched and developed by NIH. However, much of the financial value of these drugs is givenaway to pharmaceutical corporations in an outrageous example of corporate welfare.
Currently, once NIH has successfully developed a new drug it signs over monopoly commercial rights to largepharmaceutical companies which then can – and do - charge American consumers as much as they want. In thearea of breast cancer, this corporate giveaway is particularly egregious. After the NIH used millions of taxpayerdollars to conduct more than 140 clinical trials of the critical drug Tamoxifen, the drug is now sold to Americanconsumers at almost 10 times the price as sold in other nations.
It is absurd that Americans must pay twice for lifesaving drugs, first as taxpayers to develop the drug and thenas consumers to pad pharmaceutical profits. These costs fall hardest on those least able to bear the burden, suchas cancer patients, AIDS patients and senior citizens, nearly half of whom must pay the full cost of prescriptiondrugs out of pocket. This is particularly outrageous because, unlike the Americans who must bankruptthemselves to get lifesaving medicines, the pharmaceutical industry is extremely healthy and hardly in need oftaxpayer support. From 1988 through 1995, pharmaceuticals surpassed all other Fortune 500 industries in profitrates, and they have ranked in the top two for 31 of the past 39 years.
In the case of AstraZeneca, the monopoly owner of Nolvadex (the trade name of Tamoxifen), the situation is
obscene. Currently, Nolvadex sells for around $1200 for a year’s supply of the drug. The industry claims it
needs to charge high prices for drugs in order to pay for expensive research and development, yet in the case of
Tamoxifen, it is the NIH – not private industry – that has funded and continues to fund most of the clinical
research. In 1999 alone, AstraZeneca pocketed more in pre-tax profit ($3.7 billion) and spent more on
advertising and administration ($4.8 billion) than it spent on R&D (only $2.4 billion). Put in real terms, just
1.5% of the amount AstraZeneca profited in 1999 is enough to pay for a full year of Tamoxifen treatment
for 45,000 women with breast cancer – the same amount of Americans that die each year of the disease
according to the American Cancer Society.
The Sanders legislation requires the NIH to insure that drugs developed at taxpayer expense are provided to thepublic on reasonable terms. This anti-corporate welfare legislation is not a radical proposal; former NIHDirector Bernadine Healy called pharmaceutical overpricing of taxpayer-financed drugs “inhuman,” andPresident Bush instituted a reasonable pricing clause for drugs developed largely with government resources atNIH.
TABLE OF CONTENTS
PAGE 4: THE HISTORY OF TAMOXIFEN FROM DISCOVERY TO THE PRESENT
PAGE 5: THE IMPORTANCE OF TAMOXIFEN IN FIGHTING BREAST CANCER
PAGE 6: THE TAMOXIFEN PRICE GAP: HOW AMERICANS PAY THE HIGHEST PRICES IN THE WORLD
PAGE 7: TAMOXIFEN AS DRUG INDUSTRY CASH COW: PROFITS AND FACTS
PAGE 8: GRAPH: PROFITS FROM TAMOXIFEN OVER THE LAST 3 YEARS SKYROCKETING
PAGE 9: GRAPH: GEOGRAPHY OF ASTRAZENECA PROFITS
PAGE 10: FY1999 ASTRAZENECA ANNUAL FINANCIAL REPORT
PAGE 11: CAROLYN TAPP, PRESIDENT, WOMEN OF COLOR BREAST CANCER SURVIVORS
SUPPORT PROJECT, DESCRIBING WOMEN WHO CANNOT AFFORD TAMOXIFEN
THE HISTORY OF TAMOXIFEN
1962: Tamoxifen patented by the British company Imperial Chemical Industries, Ltd. as a birth control pill
1971-1973: Dr. Mary Cole and England’s Christie Hospital begins early trials using Tamoxifen to treat
advanced breast cancer in post-menopausal women
1978-1980: Study conducted at University of Pittsburgh as part of the taxpayer-funded National Surgical
Adjuvant Breast and Bowel Project (NSABP)
1981-1988: NSABP studied 2,892 patients who received 5 years worth of Tamoxifen (“The Tamoxifen Story,”
NCI website)
1987-1993: NSABP second phase of study included 1,166 patients (“The Tamoxifen Story,” NCI website)
1992-1998: Taxpayers fund a massive “Breast Cancer Prevention Trial,” studying 13,388 women over the
course of more than 6 years. The study was conducted through the National Cancer Institute, a subsidiary of the
NIH (Altman, NY Times, April 7, 1998)
1999: The American Society of Clinical Oncology – the nation’s largest group of cancer specialists – suggested
that physicians should consider prescribing Tamoxifen to tens of millions of healthy women to help prevent the
disease.
PRESENTLY: The NIH is currently recruiting subjects for 25 new clinical trials to study new ways of using
Tamoxifen in fighting breast cancer (NIH, www.clinicaltrials.gov) 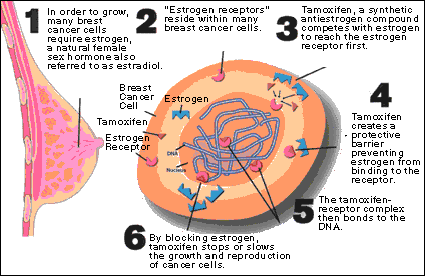