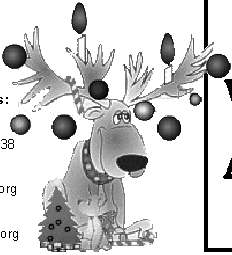 Everyone needs a home for the holidays . . .
Adoption Center
Street Address:
Hours:
Saturdays from
Phone:
(805)735-6741
Mailing Address:
VIVA
PO Box 896
Website:
http://vivaonline.org
Email:
[email protected]
A NON-PROFIT HUMANE ORGANIZATION DEDICATED TO A BETTER LIFE FOR ALL ANIMALS Whether you send us money or work in the shelter or stay up nights trapping or helping with the newsletter or giving up your weekends atthe feral cat sanctuary or helping with fund raising or mowing our lawns or working at our retirement home for cats or doing maintenance work or weeding and clipping or sponsoring an unadoptable cat, or fostering or working with the dog program or hauling litter,you are needed and very much appreciated! All that you do is for theanimals. Volunteers for Inter-Valley Animals survives because of you.
In addition to the wish list items that we use every day, we spend a lot of money keeping VIVA alive. The utilities costs at the shelter and at Sylvester House seems to go up and up. We buy between 1,500 and 2,000 pounds of litter every week. We spay and neuter as many cats as we can get our hands on, and beyond that, we have medical expenses that have reached as high as $2,500 a month. We buy supplies for the feral cat sanctuary and the retirement home for cats.
We have a small pick-up for light loads and a very large pick-up for heavy loads such as litter. We have general maintenance costs. We figure it takes at least $400 a day just to keep the shelter open, and that doesn’t take into account the sanctuary or retirement home. So you can see why we appreciate your monetary donations. Please keep donations are fully tax deductibleif you can itemize.
SOME STATISTICS ON ARRIVALS AND DEPARTURES To the date of this writing, as close to accuracy as I was able to count, we took in 295 cats this year and adopted out 210. And those figures do not take into account many of the RTOs (return to owners) and especially the TNRs (trap/neuter/release back to the area they were found if someone will continue to feed). The heaviest months of 2 ply paper towels
arrivals were March, May, and June which were peak kitten months.
fabric softener dryer sheets
The best month of adoptions was June.
liquid bleach
We stil have wonderful kittens waiting to be adopted, preferably liquid dishwashing soap
in pairs. There are kittens being fostered until they’re ready for liquid laundry soap
neutering; there are kittens at the shelter, ready to go. There are 13 gallon plastic bags
even older kittens in the kitten room that have grown-up there and Friskies Buffet canned food
beg for a home of their own. Don’t you have room for one or two large bags of Purina Cat Chow
Science Diet Adult Maintenance
If you have an old or inherited fur or fur-trimmed garment in yourcloset, donate your fur or shearling coats, hats, gloves, muffs, and fur-trimmed apparel to Coats for Cubs program for use as surrogate
“mothers” to comfort orphaned wild animals. Pack in box or padded envelope and mail to Coats for Cubs, 2100 L St, NW, Washington DC20037. For added information: humanesociety.org/coatsforcubs.

Yasmin, Yale, & Yancey York:A Rescue Story by Heather Kennedy In October, Connie at Animal Care Hospital told me she and some clients had seen an adult black manx and two kittens living in the brush of the median between the ACH and Sansum parking lots. Linda and I made plans to trap. Our first night out we sat with a baited trap to see who would show up to eat. A little black kitten arrived first with her mother close behind. We could see the mother cat was not really a manx--she had lost most of her tail as a result of trauma. We decided we should trap her as quickly as possible so we could get her medical attention. The little black kitten feasted in the trap over and over again. Mom finally lowered her guard and decided to enter the trap as well, and we got both mom and baby at once--now named Yasmin and Yancey York respectively. We waited for a couple more hours but no more cats or kittens showed up. We feared the worst had happened and the other kitten had been hit by a car, but we resolved to show up again the next night to see if he was still around. In the mean time, Dr. Shaw spayed the mom cat--Yasmin--and amputated the rest of her tail. When we showed up the next night, the missing kitten was in a median in the middle of the parking lot meowing at the top of his lungs. We were upset that he seemed so distressed, but we knew he would be easy to catch. After all, he had to be hungry. We finally left, defeated, at 3 in the morning. We were very concerned about the kitten being in the parking lot on his own. Mortality rates for feral kittens are very high and, as a result of our decision to remove Yasmin and get her medical treatment, this little guy no longer had mom to watch over him. We rearranged our schedules to monitor his activity and trap him; I missed class, Linda missed work, and we lived on candy and sodas purchased at the 99cent store. We set traps and food all over the parking lot, and we even tried covering an entire median with a net. That might have worked had the sprinklers underneath not come on. Oops! The security guard patrolling Lompoc Ford at the time watched our activities with great interest. Five nights later, we had finally figured out the kitten’s routine--he hid during the day, wailed in a center median at dusk, and finally returned to one spot, and one spot only, to eat and sleep at about 10pm after the last store closed. Once we figured that out, it took us less than an hour to trap him. In light of his obvious genius, we named him Yale.
Yale and Yancey (right) are now getting braver and more social every day-- they’re watching me as I write this. They’re ready to go to a home together with an understanding family that will let them adjust at their own speed. Like most feral or formerly feral kittens, they feel safer when there’s a big cat around. They’ll be fine in a home of their own, but if you have an adult cat who wouldn’t mind some company, Yale and Yancey would make a great addition to your family. Email or call us if you’re interested in adopting them. And in case you’re wondering, Yasmin York recovered nicely after surgery and now lives at our feral cat sanctuary. Bring things, buy things, have some fun!