PROBING DARK ENERGY WITH SUPERNOVA SEARCHES
CENTRA – Centro Multidisciplinar de Astrofísica, Instituto Superior Técnico, Lisbon Abstract. Four years ago, two teams presented independent analyzes coming from photometry of
type Ia supernovae at various distances. The results presented back then shook-up the scientific
community: the universe is accelerating with a positive repulsive fluid sometimes called dark en-
ergy. No significant work has disproved the fundamental results, yet some doubt subsists in the
assumptions behind the full use of type Ia supernovae as perfect distance indicators. The uncertainty
of the evolution problem, the explosion mechanisms and the diversity of the observed light curves
properties are often cited problems. All these aspects are now being deeply investigated in to-come
or already started supernova searches along with the on-going quest of determining the nature of dark
energy. We will present here a brief introduction to the use of type Ia supernova in cosmology, the
current status of supernova cosmology as well as an overview of the wide supernova surveys about
to begin.
Keywords: supernovae, dark energy, cosmological parameters
1. Relating Energy Densities with Distance Measurements
Measuring distances in the universe is a crucial step to get estimates of cosmolo-gical parameters. The greater the distances are, the more they give us access to thegeometry and the evolution of the universe. Several ideas to get good cosmologicaldistance indicators have been attempted since 1930. Whereas for nearby objects,there exists a variety of distance methods, for more distant objects, one type ofastrophysical object has been successful in converting redshifts to Megaparsecswith some good accuracy: Type Ia Supernovae (SNIa).
Two observations are needed to be able to use SNIa as cosmological distance indicators: the spectrum gives us the redshift z and the identification of candidate,and multi-band photometry to reconstruct the lightcurve F (t) of the supernova.
Relating the two observations is done through the luminosity distance dL arisesdirectly from the inverse-squared relation F (t) = L(t)/4πd2(z), where L(t) is the intrinsic luminosity. The cosmological parameters are only included in dL;supernovae observations are therefore ‘cosmological-model-independent’. So far,observations have not shown any other dependence of L but the SNIa epoch t andlightcurve shape parameters, conveniently removed after a standardization process(more on this topic).
With only two fair assumptions of an isotropic and homogeneous universe at very large scales, and Einstein’s gravity dictating the energy transfers with geomet-rical properties, we can describe how the energy content of the universe influences Astrophysics and Space Science 290: 1–12, 2004.
2004 Kluwer Academic Publishers. Printed in the Netherlands.

its single expansion factor a(t). Redshift is interpreted as a cosmological effectthrough the relation a(t) = a0(1 + z)−1. Each component of the universe can berepresented by a fluid of density of energy ρi, where the i-index represents non-relativistic matter (m), radiation (r) or dark energy (x). The values of the energydensities rule entirely the time dependence of the expansion factor, by the so-calledFriedman equation (see e.g. Peacock, 1999): where we define the Hubble constant H , and k = {−1, 0, 1} a constant defining thespace curvature of a simple topology (respectively open, flat and closed) Universe.
At a critical density ρc = 3H20 where i = ρc, the universe is flat. For lower values, of the sum, it is open. We further reduce the energy densities as ρi . Given these notations, and defining At present, observations show that only the matter and dark energy componentsare significant, and possibly, as indicated from all latest CMB data (Benett et al.,2003), we could live in a flat universe, leaving simply Generally we characterize each energy component of the fluid universe by the equation of state pi = wiρic2, where wi is the equation of state parameter. We canassume very confidently at many scales that matter behaves as an ideal fluid suchthat for wm = 0 for non-relativistic matter and wr = 1/3 for relativistic matter andradiation. It becomes less intuitive with the introduction of a repulsive componentwx < −1/3, as indicated by observations, very hard to test at laboratory scales.
There has been a very extensive literature dealing with the consequences or thenature of a positive, possibly evolving dark energy component. The cosmologicalconstant is the most simple one. Often referred as a vacuum energy, it could be the relic of some superseding theory. The equation of state parameter keeps aconstant value w = −1, but recent development introduce a scalar field as a darkenergy component, with a wx(z) evolving with time (see Padmanabhan, 2003 for areview). We will see how it may be possible the reconstruct the equation of state,and we will adopt a first order parameterization wx(z) = w0 + w1z.
Armed with a cosmological description, we can now derive the luminosity distance. It is fairly straight forward to show the following formula (see e.g. Pad-manabhan, 2003):

PROBING DARK ENERGY WITH SUPERNOVA SEARCHES Figure 1. Left panel: Luminosity distance as a function of redshift for various sets of ( m, at a redshift of z ∼ 0.3 and above we can start to discriminate models. Right panel: Degeneraciesamong various cosmological models assuming a flat universe. The combinations of ( m, w0, w1)are compared to a (0.3, −0.7, 0) model (Linder and Huterer, 2002). The w in the figure correspondsto the w1 in the text.
i (1 + z )3(1+wi ) − where S(x) = sin(x), x or sinh(x) for closed, flat or open models respectively.
Somewhat complicated, the integrand is nothing less than the inverse of the Hubbleconstant at redshift z and has an analytical primitive for a flat universe. Figure 1represents the luminosity distance as a function of redshift, for four different sets of i ’s. Only for redshifts higher than z > 0.3 it is practically possible to discriminate When we measure supernova fluxes, we have direct access to H (z) and thus i , but it causes degeneracies between Even for pure standard candles, breaking the degeneracy among the full set of in-volved cosmological parameters (H0, m, x, w0, w1) requires additional inputs.
Typical additional inputs if we are interested in the equation of state parameters,are assuming a flat universe (from CMB), a prior on and marginalizing over LH0. Figure 1 shows the difference in magnitude expec-ted between a flat universe at m = 0.3, w0 = −0.7 and w1 = 0 with other m ∼ 0.3. Nonetheless, to make supernova results as independent as possible, it is very crucial to obtain a large set of well observed and well redshift-sampled supernovae up to a redshift z > 1.5. Multiple redshiftobservations brings more leverage and important degeneracy breaks between thecosmological parameters (Astier, 2001; Goliath et al., 2001; Linder and Huterer,2002).
2. Current Results
Obtaining a set of supernovae at various redshift is a dedicated task, on whichtwo teams have concentrated their efforts for the last decade. We present theircurrent results here. SNIa only appear few times per millennium per galaxy and canbe photo-metered for about 200 days in rest frame at low-z. Hunting supernovaerequires both a wide field and large mirror to cover a large volume of space, gettingmillions of galaxies up to redshift of z ∼ 1 from ground. A full discovery strategyhas been set up through the nineties by the two collaborations. The use of 4-mclass telescopes with the appearance of high quantum efficiency CCDs allowedsuch discoveries. Since a SNIa rises in about ∼ 20 days from undetectable lightto maximum light, the strategy elaborated was to use a 3 weeks baseline betweenmoonless reference images and discovery images of the same fields, and look forSNIa candidates in the subtracted images, using fine-tuned image processing soft-ware. Candidates were whereupon confirmed spectroscopically in 8m-10m classtelescopes and followed-up photometrically in as many telescopes as allocated tobuild the lightcurves.
2.1. DIMMING OF SNIA WITH A DARK ENERGY COMPONENT Perlmutter et al. (1999a) presented cosmological parameters estimations from ananalysis of 42 high redshift SNIa, combined with 18 low redshift ones from theCalan-Tololo campaign (Hamuy et al., 1996). The observed apparent luminosityshowed a systematic dimming compared to a simple which after careful checks, was interpreted as a clear evidence of a presence ofdark energy. Riess et al. (1998) showed very similar results from completely in-dependent analysis, from 10 high redshift and 27 low redshift SNIa (within whichthe Calan-Tololo ones). If we assume the universe is composed of matter and acosmological constant, the combined results show the existence of a cosmologicalconstant with 99.9% confidence leading to an accelerating expansion. Figure 2show the combined confidence contours for By now assuming a flat universe, and combining measurements, with redshift m and CMB measurements, we can get some limits on the equation of state parameter. The constraints only suggest wx < −0.5 – see e.g. Per-lmutter, Turner and White (1999) – and yet neither permit to discriminate amongdark energy models, nor permit to reconstruct a dynamical equation of state.
The statistical uncertainties are still the largest contribution to the total error budget, although the systematics are not far behind. With a larger statistical sample, 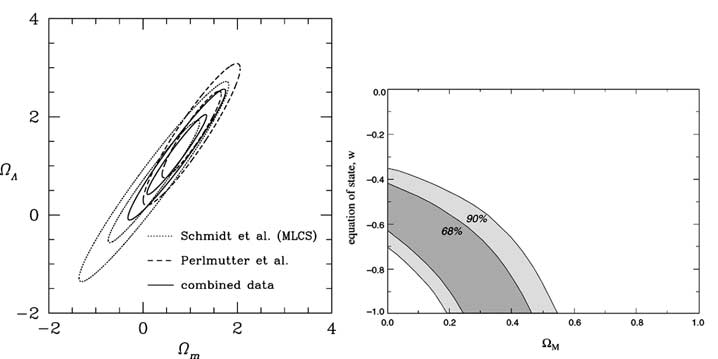 PROBING DARK ENERGY WITH SUPERNOVA SEARCHES Figure 2. Left panel: Combined confidence contours in the ( m, SNIa results (Wang, 2000). Right panel: Equation of state parameter (assumed constant in z) and confidence interval, for a flat universe from (Perlmutter et al., 1999) results.
improving the current measurements would definitely require much better controlover the systematic uncertainties. Extensive internal checks have been performedon the properties of the high-z and low-z objects used in these measurements inorder to detect difference in the samples. We find that systematic errors are mostlydue to our limited knowledge of SNIa photometric and spectroscopic behavior.
Indeed, when measuring distances using SNIa, we apply corrections for instru-mental (e.g. k-corrections) and foreground effects (extinction). The accuracy ofthese corrections depends heavily on our knowledge of SNIa intrinsic properties.
At the moment, a half-dozen significant systematic errors have been identified. Wewill present the most important ones below.
The dimming of SNIa diminishes down to ∼ 0.28 mag at z ∼ 0.5 compared to anopen universe with = 0, and several attempts have accounted the dimming for other reasons but the distance. Apart for non-standard cosmologicalmodels, a more direct and physical explanation is to reconsider the assumptionsbehind the use of SNIa.
SNIa standardizationSupernovae Ia explosions are short events and somewhat rare. They are likely to bethe result of a thermonuclear burning of iron elements of a degenerate CNO whitedwarf. The interest of SNIa in cosmology comes from the homogeneity in theirspectra and lightcurves. Although the homogeneity does not appear so strongly fortheir absolute magnitudes, a lightcurve shape analysis shows an empirical relation 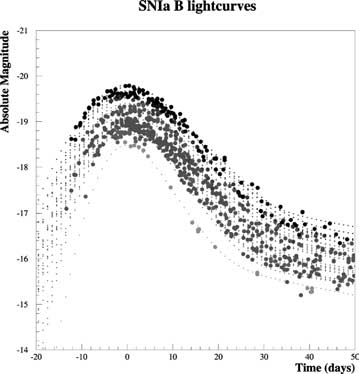 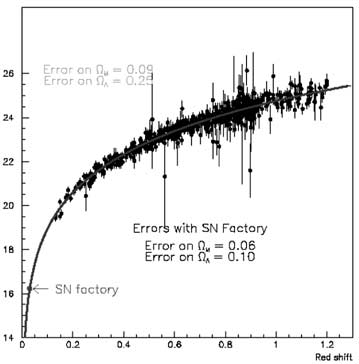 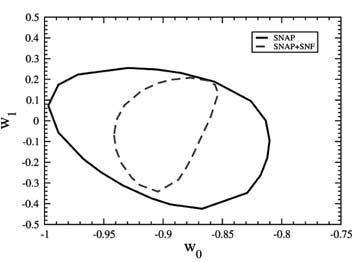