Effect of fish and fish oil-derived omega-3 fatty acids
on lipid oxidation
School of Medicine and Pharmacology, The University of Western Australia; Cardiovascular Research Centre; and The Western Australian Institute for Medical Research, Perth, Western Australia, Australia There is evidence that omega-3 (ω3) fatty acids derived from fish and fish oils reduce the risk ofcardiovascular disease via mechanisms underlying atherosclerosis, thrombosis and inflammation.
Despite these benefits, there has been concern that these fatty acids may increase lipid peroxidation.
However, the in vivo data to date are inconclusive, due in part to limitations in the methodologies. Inthis regard, our findings using the measurement of F -isoprostanes, a reliable measure of in vivo lipid peroxidation and oxidant stress, do not support adverse effects of ω3 fatty acids on lipidperoxidation.
Keywords: Fish oil, omega-3 fatty acids, lipid oxidation, F -isoprostanes There is now considerable evidence that a diet rich in ω3 dation and oxidative stress in the pathogenesis of cardio- fatty acids derived from fish and fish oils, specifically vascular disease.8 It is thought that oxidative stress and eicosapentaenoic acid (EPA, 20:5 ω3) and docosa- oxidized lipids play a critical part in the genesis and pro- hexaenoic acid (DHA, 22:6 ω3), protects against athero- gression of the atherosclerotic lesion.8 The hypothesis that sclerotic heart disease, myocardial infarction and sudden increased intake of ω3 fatty acids may lead to increased death.1 ω3-Fatty acids have a wide range of biological lipid peroxidation is based on the premise that fatty acid effects, including benefits on lipoprotein metabolism, oxidizability increases with an increase in the number of platelet and endothelial function, blood pressure, vascu- double bonds in the fatty acid chain.9 Whilst this may be lar reactivity, cytokine production, coagulation and fibri- true of in vitro studies of lipid peroxidation in homoge- nolysis.1–3 Recent evidence also has demonstrated that, neous solutions, in vivo systems are more complicated and in humans, EPA and DHA have differential effects on influenced by additional factors. In support of this, Visioli lipids and lipoproteins,4 blood pressure5 and heart rate,5 et al.10 showed that, under equal conditions of oxidative Published by Maney Publishing (c) W. S. Maney & Son Limited stress, fatty acids oxidized at different rates and generated Despite the benefits associated with increased ω3 fatty different oxidation products, in a manner that was unre- acid consumption, there remains a theoretical concern that lated to their degree of unsaturation. Lipid peroxide levels these fatty acids may increase the unsaturation index, con- were in fact highest following oxidation of linoleic acid sequent to the incorporation of EPA and DHA into mem- (18:2 ω6).10 Arachidonic acid (20:4 ω6) and DHA gener- branes and lipoproteins, leading to increased lipid ated lower levels of lipid peroxides, with lowest levels peroxidation.7 The significance of this relates to the fact arising from oxidation of EPA. Formation of conjugated that there is much evidence supporting a role for lipid oxi- dienes was also maximal for 18:2 ω6. In particular, theproduction of conjugated dienes from 20:4 ω6 and EPAwas approximately 25% of that of 18:2 ω6. DHA oxida- tion yielded only 10% of the conjugated dienes relative to Correspondence to: Dr Trevor A. Mori, School of Medicine and The data relating to the effects of ω3 fatty acids on lipid Pharmacology, Medical Research Foundation Building, Box X 2213 peroxidation and oxidative stress in vivo are contradictory.7 GPO, Perth, Western Australia 6847, AustraliaTel: +61 8 9224 0273; Fax: +61 8 9224 0246; These inconsistencies may be related to differences in the populations studied, the quantity and presentation of the 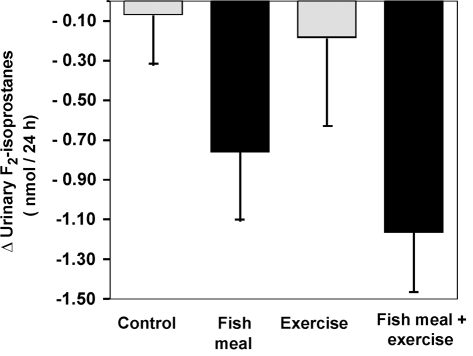 gas chromatography mass spectrometry. In addition,plasma TBARS were significantly elevated following ω3 fatty acids, whereas MDA was reduced. Whenplasma MDA levels were normalized to plasma polyun-saturated fatty acid concentrations, significant differ-ences were eliminated.25 Other measures of oxidative stress include electron spin resonance detecting free radical species,24 measure-ment of antibodies to oxidized LDL31 and breath excre-tion of ethane and pentane.24 The latter assay, however,has yielded variable results in animals32 and humans27supplemented with ω3 fatty acids. Other literaturereports have shown that ω3 fatty acids had no adverseeffects on plasma protein oxidation26 and rendered ery-throcytes more resistant to haemolysis following oxida-tive challenge.33 On the basis of studies reporting adverse effects on Fig. 1. Change in urinary F -isoprostane excretion from baseline to post-
intervention by intervention group. Mean ± SEM. P < 0.013 for the main lipid peroxidation, some researchers have suggested that effect of fish after adjustment for baseline values, using general linear ω3 fatty acids may affect the antioxidant status and, models (GLM). Reproduced from Mori et al.41 with permission.
therefore, should be taken in conjunction with vitaminsupplementation. The data from such studies, however,are inconclusive.16,27,34–37 ω3 fatty acids (fish versus encapsulated fish oils), the Although most of the above-mentioned methods rep- duration of the study, the study design, the antioxidant resent different aspects of lipid oxidation and collec- content of the supplement, or the composition of the tively provide some knowledge of oxidative damage, background diet. It also has also been suggested that the none is considered a reliable measure of oxidative stress.
total concentration of polyunsaturates, rather than the In this regard, the F -isoprostanes are prostaglandin-like unsaturation index, may be more important in determin- metabolites of free radical peroxidation of arachidonic ing lipid peroxidation.11 However, the most plausible acid38 and there is now good evidence that they provide a explanation for the inconsistency between studies is dif- reliable measure of in vivo oxidative stress.39,40 In sup- ferences in the methodologies employed to assess lipid port of this, elevated F -isoprostanes have been reported in animal models of free radical injury, in human condi- Much of the literature regarding the effect of ω3 fatty tions associated with increased oxidative stress, and in acids on lipid peroxidation is based on indirect and/or non-specific assays. Studies utilizing the oxidizability of Using F -isoprostanes, measured by gas chromatogra- LDL have shown either enhanced,12–17 or reduced, or no phy–mass spectrometry, we have demonstrated that effect,11,18–22 of ω3 fatty acids. In this assay, LDL is iso- these metabolites are significantly reduced following lated from plasma and then subjected to oxidative condi- consumption of ω3 fatty acids taken as fish oils or in fish tions. It is feasible that in patients on various meals. We showed that fish meals providing approxi- Published by Maney Publishing (c) W. S. Maney & Son Limited medications, LDL oxidizability could be affected by par- mately 3.6 g/day of ω3 fatty acids for 8 weeks to Type 2 tition of drugs into the LDL. Indeed, a divergence has diabetic patients, significantly (P = 0.013) reduced uri- been shown between the measurement of LDL oxidative nary F -isoprostanes by 20% (Fig. 1).41 Relative to a susceptibility and urinary F -isoprostanes as a measure control group, urinary F -isoprostanes were reduced by 0.83 nmol/24-h. This effect was independent of age, One of the most common methods for assessment of gender, body weight change and the increase in ω3 fatty lipid peroxidation measures thiobarbituric acid reactive acids or the fall in ω6 fatty acids in plasma, platelets and substances (TBARS) by a colorimetric assay. This assay has been widely criticized on the basis of its lack of We recently have shown that cord plasma and urinary specificity and results need to be interpreted with care.24 F -isoprostanes were reduced in infants whose mother Studies of ω3 fatty acids using this methodology have received fish oil during pregnancy.42 Pregnant atopic shown either elevated levels16,17,25–28 or no change29,30 in women received 4 g daily fish oil or olive oil from 20 TBARS. The limitation of this assay was exemplified by weeks’ gestation. Cord plasma F -isoprostanes were sig- Higdon et al.25 who showed that, in post-menopausal nificantly lower (P < 0.001) in the offspring of women women given ω3 fatty acids, plasma TBARS were 10- who had taken fish oil during pregnancy compared with fold higher than malondialdehyde (MDA) measured by those who took olive oil (Fig. 2). These differences were 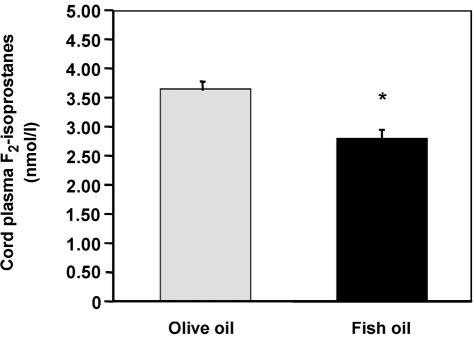