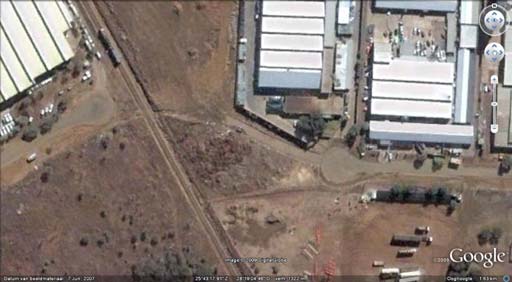 Discovering Waltloo
By JC Pauw
One of the best things about birding is the way it unexpectedly transforms drab places into places of wonder: provided, of course, that you are an atlaser hungry for records. I am not talking about the obvious foul-smelling (to non birders) or dangerous venues, such as sewerage works or Leeupan-on-settlement. When one goes to Roodewal or Strandfontein you know you are going to be entertained. In fact, you may expect the unexpected. No, I am talking about Waltloo – the industrial area between Silverton and Mamelodi best known to Pretorians as the Place-of-the-slow-queue where you go to have your car registered, your driver’s licence renewed and such. The pentad in which we live, 2540_2815, is the most atlased with 213 full cards at the time of writing. Following the lead of Willem Boshoff, one of my mentors, I was recently obliged to begin sending in cards for this special block – a pentad consisting of a nice variety of habitats within a city. The 221 species already recorded were produced by the National Botanical Gardens, spacious leafy suburban gardens, the municipal recreation area at Derdepoort, Colbyn vleiland and the top of the Magalies around Derdepoort. Not much can be expected from an industrial area next to a tract of land covered by thousands of small residential stands. Wrong! With my first card I was on my way to Derdepoort passing the municipal traffic facility. On the spur of the moment I stopped to look if I could find something in the few hectares of grassland opposite. Immediately I heard Rufous-naped Lark loudly proclaiming his presence. I walked into the natural grass with scattered thorn trees, broken bottles, plastic, rags and broken appliance parts. He was soon seen on a stone. This was followed by my feathered Prozac, Zitting Cisticola, plus Black-headed Heron, Spotted Thick-knee, Common Fiscal and Cattle Egrets. The next two visits produced Zit again as well as several loud and conspicuous Neddicky. So much for the city limits! I didn’t get to Derdepoort because I decided to see what was on the other side of the veld. I turned into Mundt Street with its silos, a municipal electrical depot and warehouses to let. The smell of baking bread hangs in the air. Swifts and swallows fill the sky and the ground is replete with sparrows and doves. At the cul de sac there is a little circle for vehicles to turn and what can be described as a semi-permanent puddle in the road. A suspicious looking “sparrow” turns out to be a female Red-headed Finch leading to their nest in the wired fence – and another one! The long grass and rushes around the puddle is alive with red and white-winged Bishops. A Black-chested Prinia on the fence calls to make sure that I don’t mistake it for a wagtail. Later the puddle produces the second record of a Three-banded Plover in the pentad, two Hamerkop and the first Yellow-crowned Bishop in more than two hundred tries. Birds are not snobs!

VANTAGE NURSING SERVICES, INC EMERGENCY ROOM SKILLS CHECKLIST LEVEL OF EXPERIENCE Date: Years of Experience: No Experience : Needs Training The purpose of the following checklist is to assist in matching your skills, Some Experience : May need review and assistance or supervision interests and capabilities with available assignment, hence meeting your needs and the needs of our cl