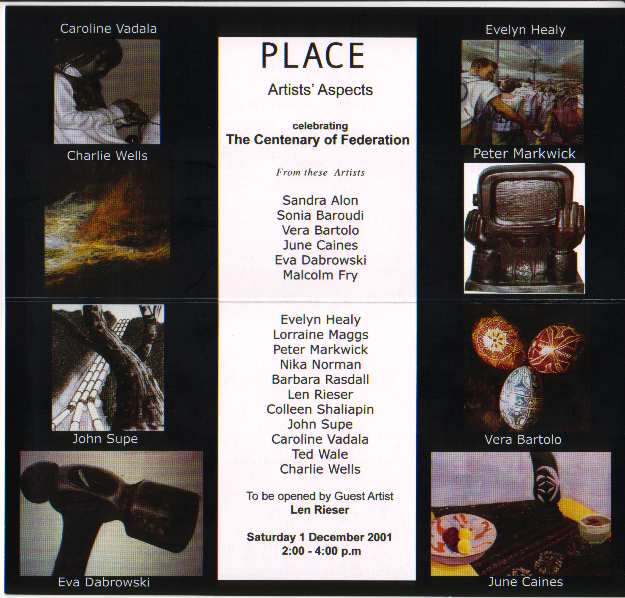 DIARY DATES:
31.10.2008
Nosh Up Night at Okori Teppan-Yaki Restaurant 14-20 Station Street East, Harris Park—parking available and licensed—not 27.10.2008
Guest speaker Surgeon from China who invented the bird flu The Rotary Club of Cabramatta Inc
serum—partner’s night 6.30—7.00pm. 02.11.2008
Chrysler Day Fairfield Showground 6.30 am gates open—all 02.11.2008
9690 Family of Rotary pre Christmas Pantomime Club Marconi 15.11.2008
Garage Stall—at Rumbriah Hall—9.00 am—sausage sizzle 07.12.2008
Children’s Christmas Party at PP Boris and Nada’s home, usu- 08.12.2008
11.12.2008
ARHRF Christmas Dinner The Epping Club 6.30—7.00 pm— 15.12.2008
27.02.2009
Charity Golf day and dinner—Riverside Oaks Golf Course for more info—contact Ted Atkinson 8837 1900 17. 5.2009
9690 Family of Rotary Annual Picnic Casuarina Picnic Ground, Nurragingy Reserve Doonside 11am 22.08.2009
“AIDA” Opera—$168 pp 1.00 pm—dinner after show Share a joke The old man in his mid-eights struggles to get up from the couch then
starts putting on his coat. His wife, seeing the unexpected behaviour, asks, “Where are Tonight’s Program: will be a normal meeting—followed by a
He replies, “I’m going to the doctor.” He says, “Nope, I’m going to get me some of that Viagra stuff.” Immediately the wife starts working and positioning herself to get out of her rocker and He says, “Where the hell are you going?” She answers, “I’m going to the doctor, too?” She says, “If you’re going to start using that rusty old thing, I’m getting a tetanus shot.” The moment you have in your heart this extra-ordinary thing called love and feel the depth, the delight, the ecstasy of it, you will dis-cover that for you the world is transformed. BIRTHDAY AND ANNIVERSARIES
Congratulations to Vera who turned 18 on Friday 18.10.2008.
Happy birthdays to PP David and Rtn Kay who share their
birthday today, 20.10.2008 and also PP George will celebrate his
birthday on Sunday 26.10.2008. to all have a great day!
Last meeting: . Saw President Bruce open the meeting and welcomed back to the
Announcements:
fold PPs Boris, John and PDG Bill and YEPS Vera. • Peter Farrell—RYLA nominees required to attend camp in January. Attendance:
• President Meeting quite interesting RYLA nominations close 10.11.2008 Club Guest:
• Paul Reid nominated for Ambassador Scholarship Visiting Rotarian:
• Rtn Kay spoke on ShelterBoxes—$1000 from Fairfield HS and $500 from Liver- Reports:
pool HS. IPP Margaret spoke on ROMAC—Rotary District 9690 now incorpo- Secretary: - PDG Bill Little
rated—District dues—some clubs have not paid. - any Guest Speakers—see PDG Village Aid trip was very successful—building mission finished early. Next • Chryslers' Car Day 2.11.2008—all hands required. Letter from John Henshaw—now part of Marsden’s Law Group Garage Sale—Saturday 15.11.2008—sausage sizzle. • Thank you note from RC Hawkesbury re $500 donation for Young Carers OCTOBER IS ROTARY VOCATIONAL SERVICE MONTH
• Letter from Marilyn Mercer—re Family of Rotary Pantomime 2.11.2008 Adherence to, and promotion of, the highest ethical standards in all occupations, including fair treatment of employers, employees, associates, competitors, and the public Durham Green Manor aged care facility and country club opening Saturday The recognition of the worthiness of all useful occupations, not just your own or those that 25.10.2008 10.00—3.00 pm 153 Menangle Road RSVP 20.10.2008 on The contribution of your vocational talents to solving the problems of society and meeting Club Service Report: Director PP Graham Shaw
• Next Nosh Up will be Japanese—Teppan-Yaki. Date is Friday 31.10.2008 not During October, Rotarians are encouraged to focus on this essential element of 24.10.2008 as originally printed Okori Teppan-Yaki Restaurant 14-20 Station Rotary. Discussions among clubs and districts on Vocational Service can lead to projects that not only develop the ethical consciousness and vocational skills of Rotarians but also Street East, Harris Park—parking available. The restaurant is licensed. the talents within their communities. Vocational Service month is an opportunity to begin Christmas Ladies Night 8.12.2008—venue TBA year-long Vocational Service activities, ranging from Rotary discussions to awards to com- • AIDA—tickets still available for 2 weeks • Bowls night with Liverpool West—15.12.2008 Devote the first meeting in October to examining the second Avenue of Service, including The 4-Way Test and The Declaration of Rotarians in Business and the Professions. Vocational Service Report: Director Rtn Robert Favelle
After expanding members awareness, solicit their input in planning projects for the Attended combined meeting with Liverpool West to inspect the new Fairfield police station. A good roll up of Rotarians were present and they all came Introduce a “mini-classifications talk” series in which each member gives a five minute away very impressed with the facility. The building design makes use of a talk on his or her vocation. Schedule one speaker for the beginning of each meeting considerable amount of natural light by the use of skylights built into the roof until everyone has made a presentation. The purpose: promote vocational awareness structure. It is a high technology station with excellent surveillance within. among Rotarians and help them recognize the worthiness of all useful occupations. Interest was shown in the new Taser guns which is only available to senior Present a vocational award to someone in the community who has exemplified outstanding police. We inspected the detectives' area and the cells which has maximum professional achievement while maintaining very high ethical standards. Promote the presentation within the community, and consider making it an annual October event. security the cells are in full view of staff and under video surveillance. Community Service Report: - PP David Butterfield
• Rtn Kay contacted a surgeon as a guest speaker for 27.10.2008 he invented the Max’s Trivia—trousers, known as “plus fours” and sometimes used in sport
bird flu serum in China —partners night 6.30—7.00 pm. derived the name from the additional 4” of cloth that hung over the knees. Part of the tunic of Prussian soldiers was a stand up collar. It was very tight International Service Report: - Director Rtn Kay Farrell
fitting and in hot weather the soldiers unbuttoned the top and when turned Attended President’s Meeting with IPP Margaret —spiel from District Direc- back it formed 2 elongated narrow triangular strips which looked attractive tors—Kay Shelterbox and IPP Margaret ROMAC—no chaperon for sometime. The academic hood originated in the middle ages. It was a shoulder covering worn by begging priests as well as keeping them warm on cold days it was a carrier bag for begged goods and gifts.