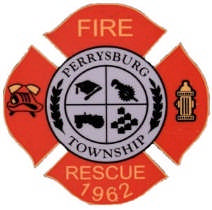 Perrysburg Township
Fire & EMS
Fire Chief
Deputy Chief
In 1960 the Perrysburg Township Trustees formed a committee of seven citizens to studythe need for fire protection in the Township. As a result of the committee'srecommendations the Trustees decided to establish Perrysburg Township Fire District No. 1,which included the entire Township except for the Village of Perrysburg. Further, thecommittee recommended the station location be in the Lime City area to best serve theresidents of Perrysburg Township. Subsequently the following occurred:  A ½ mil operating levy was approved by the voters on November 8, 1960 to finance the operations of the Department and it passed with a 1,518 to 814 vote.
 On May 15, 1961 the Perrysburg Township Board of Trustees appointed Clamer J.
Goeke as the Fire Chief of Perrysburg Township.
The Department began responding to calls in 1962 after the new volunteer firefightersreceived basic fire training.
When the Perrysburg Township Fire Department was created, patient transport was handledby Witzler Shank Funeral Home, as was the case with most systems at the time. In the mid1970's Witzler Shank chose to abandon the ambulance business. This, coupled with theincreased number of rescue runs, greater training requirements, and technological advancesin pre-hospital care lead to the creation of Perrysburg Township Emergency Medical Services A division of the Perrysburg Township Fire Department, the EMS Department was staffed by volunteer firefighters who were trained as emergency medical technicians. The EMSpersonnel were on call for six hour shifts, dispatched via fire phones, responded to the stationto get the ambulance and take it to the scene. With better training and personnel, EMS callresponse time and patient care were greatly enhanced. Further advances in pre-hospital caretraining requirements and response times made it necessary to look to the future of the EMSDepartment.
 In November 1987 the decision to become a full time service EMS Department was left to the residents of Perrysburg Township to decide.
A new levy was approved in that election, with 99 percent voting in theaffirmative.
 In 1988, EMS went full time and in reflection of the vote the life squad's unit number  Each shift had one Advanced-EMT and one Paramedic, both trained as firefighters.
Their quarters were located in the back section of the Perrysburg TownshipPolice Department.
The citizens of Perrysburg Township now had an EMS that could respond to any area locationin minutes and was considered one of the most progressive EMS systems in Ohio. PerrysburgTownship EMS was the first EMS in Northwest Ohio to have transcutaneous pacing, in-field12-lead EKGs, first medium duty ambulance, first to have Life Pack 10's and later the advanced Life Pack 12's, first in the region to use nitrous oxide, the first on the East Coast to doalbuterol nebulizers, one of the first to use a glucometer, the first to use pulse oximetry, and thefirst EMS in Northwest Ohio to start computer generating run reports.
The next two decades brought many changes to the Fire and EMS Departments.
 On November 3, 1997 Perrysburg Township hired seven additional firefighters to staff the fire station located at 26609 Lime City Road around the clock.
 In January of 2004 after Chief Michael Dimick and Deputy Chief Thomas Brice were appointed the two departments' combined under one roof in the station located at  In the spring of 2008 construction was started on a new 30,000 square foot Safety Services Building located at 26711 Lime City Road.
The project was completed and occupancy was taken in late June of 2009.
As of 2012, the Perrysburg Township Fire Department covers approximately forty squaremiles which includes: industrial, residential, and rural areas. The Department is staffed with 18 full-time personnel and twenty-five part-paid personnel. The full-time staff includes: onefire chief, one deputy chief, one fire inspector, and fifteen firefighter/EMTs. On average theDepartment handles roughly 1,500 calls for service each year. 80% of these calls are forEmergency Medical Services and the remaining 20% are for fire related calls. Around 50% ofthe Township is protected with fire hydrants but the remaining half is not and necessitatesthe need for rural water operations in the event of a fire. The Department operates: threeengines, one ladder, one heavy rescue, one light rescue, one tanker/pumper, one grass rig,two boats, three ambulances, three administrative vehicles, one mass casualty trailer, onehazardous materials unit, and one fire safety trailer. In addition, the Department maintains itsoriginal 1961 pumper

Industry updates : Jan 3 2011 BioMarker Strategies Names Dr. Samuel Broder to Board of Directors BioMarker Strategies announced today that it has appointed three new Directors, including Dr. Samuel Broder, who is a former Director of the National Cancer Institute and Chief Medical Officer at Celera; Dr. Mark Velleca, a founder and former Senior VP of CGI Pharmaceuticals; and, Dr. Paul

Idiomatic Expressions in C By Adam Petersen <[email protected]> Patterns exist at all levels of scale. At their lowest level they are referred to as idioms, as they depend upon the implementation technology. This article will present a collection of such idioms for the C language. The Evolution of Idioms As a language evolves, certain efficient patterns arise. These patterns