Neuroanatomy (2004) Volume 3 / Pages 12–14 Published online 26 April, 2004 neuroanatomy.org Large cavum septum pellucidum associated with posttraumatic stress disorder: a case reportBranislav Filipovic [1, 2] Abstract
During routine examination of a patient with posttraumatic stress disorder, a large cavum septi pellucidi was noted on CT scan. Cava septi pellucidi were seldom reported as a finding in posttraumatic stress disorders. In our opinion, large cava are only the marks of the brain susceptibility for various neuropsychiatric diseases and disorders.
[1] Institute of Anatomy, School of Medicine, University of Belgrade, Serbia & Montenegro.
[2] Private Psychiatric Clinics “Katraza” Belgrade, [3] Clinics for Child Neurology and Psychiatry, Clinical Center of Serbia, Belgrade, Serbia & [4] Clinical Center “Bezanijska Kosa”, Belgrade, Received 27 March 2004; accepted 21 April 2004 Key words: [septum pellucidum] [cavum] [posttraumatic stress disorder]
Introduction
sweating. He was ashamed to visit a psychiatrist, despite An increased prevalence of cava septi pellucidi (CSP) much advice coming from his wife and friends (“They among patients with posttraumatic stress disorder will say that I am a lunatic”), due to the fear from the (PTSD) was previously reported [1], while large CSP, potential neglect of his friends and co-workers and from isolated or associated with other dismorphogenesis, were the possibility of loosing his job (he was an active soldier mostly obtained among schizophrenics [2, 3].
at the time, in rank of the sergeant-major). The intensive fear resulted by flashbacks, avoiding behavior, decreasing Case Report
of the frustration tolerance threshold, anxiousness and Male, born in 1956, right-handed, married, father of two depressive mood, manifested by loss of the interest for children (son, 17 and daughter, 15) with high school self-care, loss of the will for initializing an attempt. education level, was a participant of the war in the Nightmares with war scenes became more and more former Yugoslav republic of Bosnia and Herzegovina. In frequent, his attention became more and more vigilant, 1992, he was wounded, captured and maltreated while and he fell into the “magic circle” from which he could hospitalized and prisoner of war in a concentration not get out by himself. camp. He limps today as a consequence of the neglected In his premorbid personality, certain rigidity dominated bad medical care in the hospital. He has even survived his attitudes, openly expressed in raising children (i.e., a slaughter attempt, from which he has a remarkable he was a very strict father), but he has never punished scar of approximately 11 cm, beginning from the them physically, nor did he have violent outbursts toward anterior part of the neck, spreading laterally, over the his wife or other persons.
sternocleidomastoid region. He was released in June In the personal anamnesis, when he was 16, he faced an 1995. Three months later, in September, first symptoms early loss of his father, who died in a mine accident in of PTSD appeared in the form of vegetative symptoms, 1972. He has gave up an offer to continue the education such as dyspeptic troubles, gastric pain and pirosis, loss in the Military Academy, because he had to take care of of the appetite, and nightmares, followed by extensive his mother, brother and sister. He was a moderate smoker eISSN 1303–1775 • pISSN 1303–1783 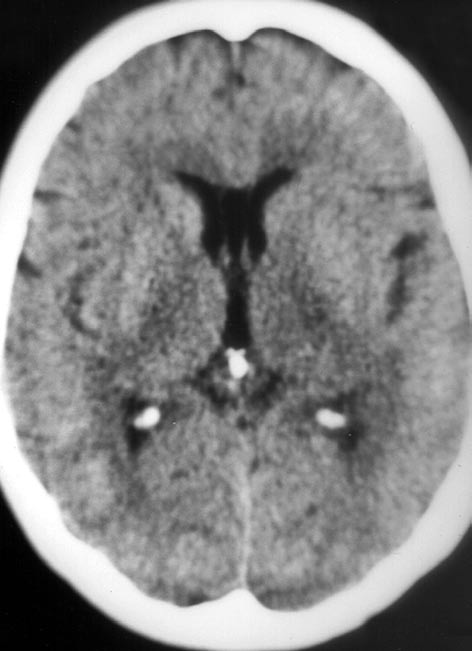 Neuroanatomy (2004) Volume 3 Pages 12–14 | Filipovic et al.
office. He was admitted shortly after, and he underwent standard CT scan procedure (he could not afford MRI scanning, because social insurance was unable to cover his treatment), where a large CSP (8x19 mm, Figure 1) was obtained, without signs of cortical or subcortical brain atrophy in any brain region. The same finding persisted in control CTs performed every six months. Electroencephalogram did not reveal any oddities in his brain activity. Psychometric evaluation showed the patient to have an average intelligence. MMPI-2 showed a high depressive peak, and he scored 19 on Hamilton Anxiety Rating Scale and 27 on Hamilton Depression Rating Scale. Beck Depression Inventory score was 43. There was no Initially, he was treated with antidepressant amitriptyline in doses of 40 mg pro die, divided in two equal doses administrated morning and evening. Anxyolytic therapy consisted of bromazepam in doses of 3 mg, three times per day. He was also advised to visit a psychotherapist, which he refused. All the efforts for his treatment remained without response over next few years, even after his pharmacotherapy changes (amitriptyline was replaced by clomipramine, and carbamazepine and cinerazine were added), but his psychological state did not get worse, either. Our pharmacotherapy consisted of sertraline, in a single dose of 50 mg/day, combined with hypnotic brotiazolam, and his state slightly improved Figure 1. CT scan of cavum septi pellucidi (CSP) in our patient.
after six weeks. Actually, he can take care of himself Frontal horns of the lateral ventricle (FH-LV). Head of the caudate reasonably well, his nightmares have almost disappeared. His social life is increasingly improving, but he is still (less than a box of cigarettes) and his consumption of under the same medication and the strong surveillance alcohol beverages was reduced to socially acceptable of his wife.
circumstances. According to the data obtained from Discussion
his wife, he was a very thoughtful husband and father, The large CSP finding has not been reported yet in PTSD and a devoted friend. His military record and the suffering persons, according to the available literature observation of his superior officers from his file were sources. The septum pellucidum cave in our patient could be considered as a large one, according to criteria He denied receiving serious head blows in the settled by Nopoulos et al. [2], who stated that cava concentration camp and before or after that period. greater than 6 mm in length could be taken as abnormally There was no evidence of loss of consciousness or crisis large. Higher prevalence of large cava septi pellucidi was in his anamnesis or medical history.
revealed in schizophrenics, developmentally delayed He has addressed the psychiatrist for help in May 1996, population, and, in relatively lower percentage, in brains faced with threat by his wife. The PTSD diagnosis was of aggressive persons and alcoholics [4–10]. MRI guided established after the first session, according to criteria study on patients suffering from PTSD showed that 50% from 10th revision of the International Classification of them had a detectable small CSP [2]. It is probable that of Diseases. In 1999, he came to Belgrade, asking for large CSP is a congenital brain midline malformation legal advice in order to get reimbursement from the which indicates inborn susceptibility of the brain to Army, and he was recommended to visit our psychiatric neuropsychiatric disorders, including PTSD.
References
[1] Myslobodsky MS, Glicksohn J, Singer J, Stern M, Bar-Ziv J, [3] Nopoulos P, Krie A, Andreasen NC. Enlarged cavum septi Friedland N, Bleich A. Changes of brain anatomy in patients pellucidi in patients with schizophrenia: clinical and cognitive with posttraumatic stress disorder: a pilot magnetic resonance correlates. J. Neuropsychiatry Clin. Neurosci. 2000 (12) imaging study. Psychiatry Res. 1995 (58) 259–264. [2] Nopoulos PC, Giedd JN, Andreasen NC, Rapoport JL. Frequency [4] Mott SH, Bodensteiner JB, Allan WC. The cavum septi pellucidi and severity of enlarged cavum septi pellucidi in childhood- in term and preterm newborn infants. J. Child Neurol. 1992 (7) onset schizophrenia. Am. J. Psychiatry. 1998 (155) 1074–1079. Neuroanatomy (2004) Volume 3 Pages 12–14 | Filipovic et al.
[5] DeLisi LE, Hoff AL, Kuschner M, Degreef G. Increased [8] Filipovic B, Teofilovski-Parapid G, Stojicic M. Comparative prevalence of cavum septum pellucidum in schizophrenia. post-mortem study of cavum septi pellucidi in alcoholics, schizophrenics and aggressive persons. Folia Morphol. (Warsz). [6] Bodensteiner JB, Schaefer GB, Craft JM. Cavum septi pellucidi and cavum vergae in normal and developmentally delayed [9] Moseley IF. The neuroimaging evidence for chronic brain populations. J. Child Neurol. 1998 (13) 120–121.
damage due to boxing. Neuroradiology. 2000 (42) 1–8.
[7] Filipovic B, Teofilovski-Parapid G. Ageing changes of [10] Kacinski M, Kubik A, Pakszys M, Gergont A, Prajsner B. morphological characteristics of cavum septi pellucidi in adults: Progress in tests for cavum septi pellucidi in children and adults. a dissectional study. Ital. J. Anat. Embriol. 1998 (103) 107–116.