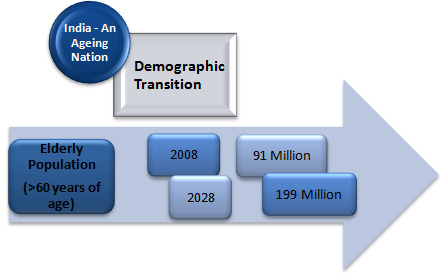 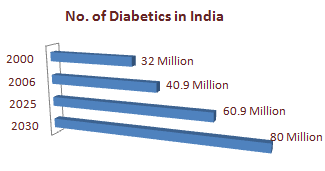 India has a huge population of 1.21 billion (17.5% of world’s population) with wider disease spectrum & diverse genetic pool. With a growth rate of 1.41%, India is expected to have a population of 1.4 billion in 2025. Over 67 million people live in India’s 6 demographic shift, due to greater affluence and better hygiene, the population is ageing; by 2028, an estimated 199 million Indians will be 60 or older, up Diabetic Population in India: India leads the world with largest number of diabetic patients, thereby known as “Diabetes Capital of the World”, with more than 41 million diabetics. It is estimated that the total number of people with diabetes in 2010 to be around 50.8 million in India, rising to 87.0 million by The primary driver of the epidemic of diabetes is the rapid epidemiological transition associated with changes in dietary patterns and decreased physical activity as evident from the higher prevalence of diabetes in the urban population. The most disturbing trend is the shift in age of onset of diabetes to a younger age in the recent years in Indians. The ‘Asian Indian Phenotype’ refers to a peculiar phenotype observed in Asian Indians characterized by increased waist circumference and increased visceral fat despite low body mass index. 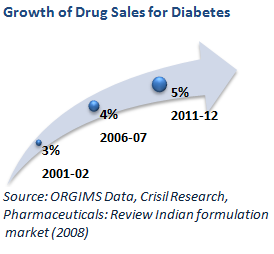 India’s Insulin Dependence (PricewaterhouseCoopers, Pharma 2020: The vision): Indian Pharmaceutical Industry ranks 14th in Global League Table by Value (1% by Value) & is world’s 2nd largest by Volume (8% by Volume) with sales of US$19 billion in 2009 & expected to reach US$ 50 Billion by 2020. The number of Indians with diabetes is projected to reach 73.5 million in 2025. The direct and indirect costs of treating such patients are currently about US$420 per person per year. If these costs remained the same as they are now, India’s total bill for diabetes would be about US$30 billion by 2025. But as its economic wealth grows and standards of care improve, treatment costs are likely to rise. The US spends an average US$10,844 per year on each patient with diabetes. If India’s per capita expenditure rose to just one-tenth of this level, the total cost of treating all patients with diabetes would be US$79.7 billion by 2025. The value of prophylaxis in India alone would thus be substantial; preventing 10% of the population from developing diabetes would save nearly US$8 billion a year. o Dietary management (diabetic diet): limiting and controlling glucose (or glucose equivalent, e.g., • INSULIN THERAPY: It is usually given transdermally or subcutaneously. Insulin prescriptions generally specify fixed amounts of long-acting insulin to be given routinely, and fixed amounts of short-acting insulin prior to every meal (the 'sliding scale' approach). The commonly used types of insulin are: Rapid-acting types (insulin analogues): aspart or lispro (5 – 15 min) Short-acting: regular insulin (within 30 minutes and is active about 5 to 8 hours) Intermediate-acting: NPH (within 1 to 3 hours and is active 16 to 24 hours) Long-acting: ultralente insulin (within 4 to 6 hours, and is active for 32 hours) Insulin glargine and Insulin detemir (within 1 to 2 hours and continue to be active for about 24

A mixture of NPH and regular insulin (within 30 minutes and is active 16 to 24 hours) A mixture of Semilente and Ultralente (typically in the proportion 30% Semilente to 70% Ultralente), known as Lente, (typically active for an entire 24 hour period) Biguanides (metformin), Thiazolidinediones (rosiglitazone & pioglitazone) Metformin is usually the first-line medication used for treatment of type-2 diabetes. The most commonly used agent for type 2 diabetes in children and teenagers The only widely used oral drug that does not cause weight gain. Initial dosing is 500 mg once daily, then if need be increased to 500 mg twice daily up to It is also available in combination with other oral diabetic medications. Sulfonylureas, Meglitinides (Repaglinide & Nateglinide) First-generation agents: Tolbutamide, Acetohexamide, Tolazamide, Chlorpropamide Second-generation agents: Glibenclamide, Glipizide, Glyburide, Glimepiride, Gliclazide o Alpha-glucosidase inhibitors: Miglitol and Acarbose Newer drugs (Peptide analogues) Glucagon-like peptide (GLP) analogs and agonists (Exenatide & Liraglutide) Dipeptidyl peptidase-4 (DPP-4) inhibitors Amylin agonist analogues: Pramlintide MNI Experience in Endocrinology / Metabolic Disorder Studies MNI has a vast experience in conducting diabetes & diabetes related complications studies including diabetic neuropathy, nephropathy, retinopathy etc. MNI has unparallel access to multiple ICH-GCP trained, leading investigators & sites across India. Many of these investigators have been actively involved in the clinical development of various molecules in the