102397 a comparison of sustained-release bupropion 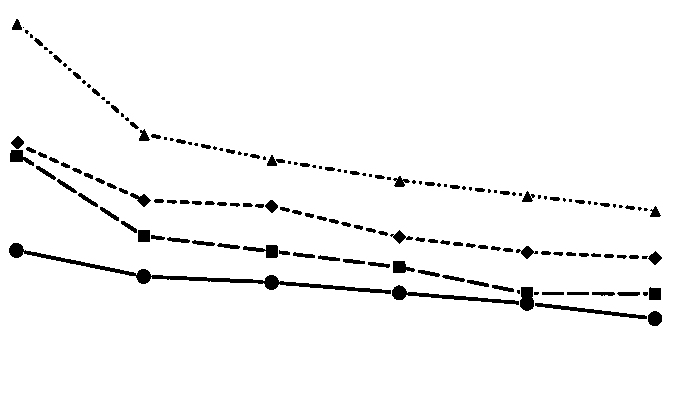 T h e New E n g l a n d Jo u r n a l o f Me d i c i n e TABLE 2. POINT-PREVALENCE SMOKING-CESSATION RATES CONFIRMED BY CARBON MONOXIDE MEASUREMENT.*
TIME AFTER TARGET
QUITTING DATE
PERCENTAGE OF SUBJECTS NOT SMOKING
P VALUE†
*Point prevalence was estimated weekly.
†The P values given are from analyses that did not include site as a covariate; therefore, they can be obtained directly from the given cessation rates. In logistic-regression analyses that included site as a covariate the same differences were found to be statistically significant.
The overall P value is for the simultaneous comparison of all four groups treated categorically. When dose was treated as a continuous variable,a significant dose effect was detected at all times (PϽ0.001 at week 6, Pϭ0.003 at 3 months, Pϭ0.03 at 6 months, and Pϭ0.02 at 12months). The pairwise dose comparisons presented were identified a priori, and the corresponding P values are unadjusted.
‡Week 6 was the final week of study medication.
Figure 1 shows the rates of continuous abstinence phase is shown in Figure 2. At the end of treatment, from the target quitting date through the end of the subjects had gained a mean of 2.9 kg in the pla- treatment (10.5 percent in the placebo group, 13.7 cebo group (16 subjects), 2.3 kg in the 100-mg percent in the 100-mg group, 18.3 percent in the group (21 subjects) and the 150-mg group (28 sub- 150-mg group, and 24.4 percent in the 300-mg jects), and 1.5 kg in the 300-mg group (38 sub- group). The rate of continuous abstinence was sig- jects). Weight change was negatively associated with nificantly better in the group that received 300 mg the dose (Pϭ0.003, by repeated-measures analysis of bupropion than in the placebo group (Pϭ0.001) of variance), with evidence of an interaction be- and in the group that received 100 mg of bupropion tween dose and time (Pϭ0.04) that indicated a larger disparity between doses at later periods. Foreach of the first six weeks after the target quitting Weight Change
date, weight change was negatively associated with The mean change in weight from the start of dose, with less weight gain found with higher doses medication (base line) for the 103 subjects who of bupropion. Of the 59 subjects who were contin- were continuously abstinent during the treatment uously abstinent from the target quitting date to thesix-month follow-up visit, the mean weight gain wasnot significantly associated with dose: 5.5 kg in theplacebo group (9 subjects), 6.6 kg in the 100-mggroup (10 subjects), 4.4 kg in the 150-mg group (21 subjects), and 4.5 kg in the 300-mg group (19 Symptoms of Depression and Withdrawal
During the medication phase, there was no evi- dence of a difference in change among treatment groups in the mean scores on the Beck Depression Inventory. In addition, the change in scores from base line was not significantly different from zero for anygroup either two weeks after the target quitting date (mean ϮSD change, Ϫ0.3Ϯ4.7 in the placebo group [121 subjects], ϩ0.4Ϯ4.1 in the 100-mg group [124 subjects], ϩ0.6Ϯ4.9 in the 150-mg group [123 sub- Figure 1. Rates of Confirmed Continuous Abstinence from the
jects], and ϩ0.3Ϯ5.0 in the 300-mg group [128 sub- Target Quitting Date through the End of Treatment.
jects]) or at the end of treatment (Ϫ0.8Ϯ4.7 [103 Self-reported abstinence was confirmed by a finding of an ex- subjects]; ϩ0.5Ϯ5.5 [115 subjects]; Ϫ0.4Ϯ5.7 [110 pired carbon monoxide concentration of 10 ppm or less. The subjects], and ϩ0.8Ϯ5.2 [128 subjects], respec- asterisks (0.01ϽPр0.05), daggers (0.001ϽPр0.01), and doubledaggers (P р0.001) indicate significant differences from place- bo. All subjects are included at all time points.
The mean changes from base line in the compos- Downloaded from www.nejm.org on March 7, 2008 . Copyright 1997 Massachusetts Medical Society. All rights reserved. 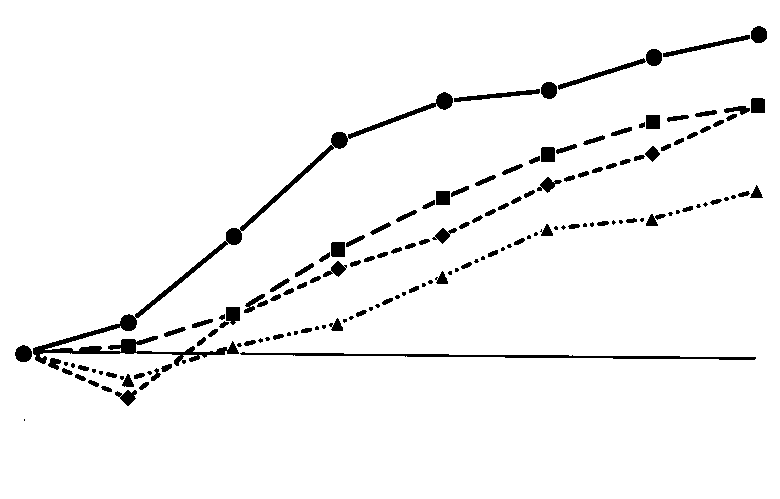 S U STA I N E D - R E L E AS E B U P RO P I O N VS. P L AC E B O FO R S M O K I N G C E S SAT I O N
stopped treatment prematurely because of adverse events (8 in the placebo group [5 percent], 9 in the 100-mg group [6 percent], 7 in the 150-mg group [5 percent], and 13 in the 300-mg group [8 per- cent]). Tremor, headaches, rash, and urticaria werethe most common reasons for stopping treatment.
Three serious adverse events were reported during or immediately after the medication phase. A 23- year-old man assigned to receive 300 mg of bupropi- on per day reported extreme irritability, restlessness, anger, anxiety, and cravings soon after he stopped smoking. The study medication was stopped, and he began treatment with a nicotine patch. Two days lat- er he was doing well. A 66-year-old woman assigned to the 300-mg group had an allergic reaction mani- fested by a pruritic rash, angioedema, dyspnea, and Figure 2. Mean Change in Weight from Base Line through the
petechiae. She had received bupropion for 24 days, End of Treatment among 103 Subjects Who Were Continuously but had begun taking amoxicillin–clavulanate for the treatment of bronchitis 8 days before the onset of Weight was analyzed at the end of each week. The mean the reaction. The bupropion and amoxicillin–clavu- weight change was significantly greater than zero (PϽ0.05 by lanate were stopped, and the reaction resolved after the one-sample t-test) at weeks 1 through 6 in the placebogroup, at weeks 2 through 6 in the 100-mg and 150-mg groups, treatment with antihistamines, epinephrine, and cor- and at weeks 3 through 6 in the 300-mg group. The P values ticosteroids. The reaction was judged to be most shown are for the effect of dose assessed with a linear regres- likely related to amoxicillin–clavulanate. A 63-year- sion model in which absolute change in weight was the de- old woman with preexisting cardiomyopathy and hy- pendent variable and dose was the independent variable.
pertension had cardiac and pulmonary arrest four Asterisks (0.01ϽPр0.05), daggers (0.001ϽPр0.01), and thedouble dagger (Pр0.001) indicate a significant difference (by days after completing the treatment phase (300-mg the two-sample t-test) from placebo. The number of subjects with data available is the same for all periods except week 5,for which data were missing for one subject in the 150-mg group. Treatment was started at base line.
We found that the sustained-release form of bu- propion was an effective treatment for smoking ces-sation, although many participants in all groups ite withdrawal scores are shown in Figure 3. For each were smoking at one year. There was a significant group, the mean change from base line was signifi- dose response at all periods. Furthermore, the rates cantly greater than zero (i.e., withdrawal symptoms of abstinence at one year were significantly better increased) at all periods. For the first week after the in the 150-mg group (Pϭ0.02) and the 300-mg target quitting date, the change in the withdrawal group (Pϭ0.01) than in the placebo group. Al- scores was not significantly different among the four though the 300-mg dose was the most effective ini- treatment groups. In the analysis of the weekly means, tially, its effects were not significantly different from a significant treatment effect was detected (PϽ0.001).
those of the 150-mg dose at the end of treatment From the pairwise comparisons of the active-treat- or at one year. Nonetheless, the 300-mg dose was ment groups with the placebo group, only the 100- the only one to show a difference in the rates of con- mg group had significantly more withdrawal symp- tinuous abstinence from the target quitting date toms (Pϭ0.008) than the placebo group. There through the end of treatment. Thus, we would rec- were no significant interactions between time and ommend using the 300-mg dose (150 mg twice a day) as the target dose for most patients, given the Despite explicit instructions to the contrary, seven favorable side-effect profile and the fact that there subjects used nicotine-replacement products during was less weight gain during the medication phase the study, only one of whom stopped smoking at with this dose. Because steady-state plasma levels of any point. That subject chewed one piece of nicotine bupropion are usually reached within eight days, we gum on day 17 before remembering he was not started the medication at least seven days before the target quitting date in order to ensure that these lev-els were attained.18 We used bupropion for seven weeks on the basis of pilot studies and experience All adverse events reported one or more times by with nicotine-patch therapy, which showed that ex- at least 10 percent of subjects in any given treatment tending treatment beyond eight weeks does not ap- group are shown in Table 3. A total of 37 subjects pear to increase efficacy.19 Although this duration of Downloaded from www.nejm.org on March 7, 2008 . Copyright 1997 Massachusetts Medical Society. All rights reserved. 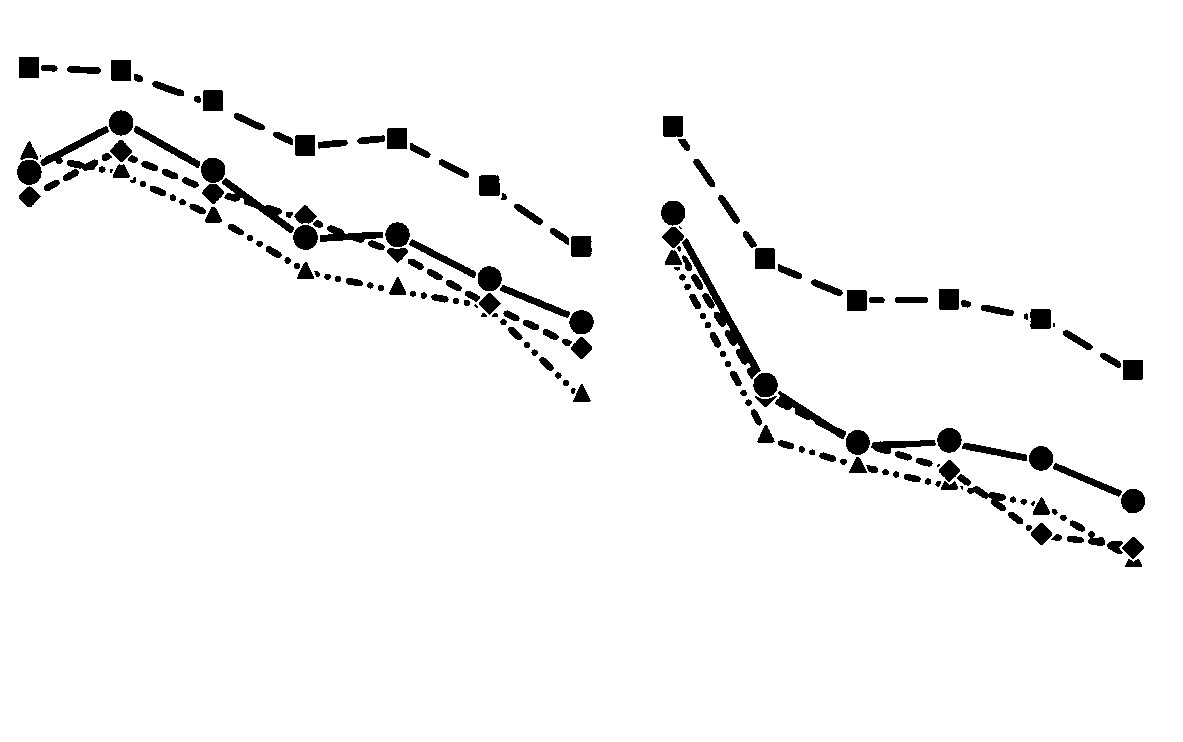