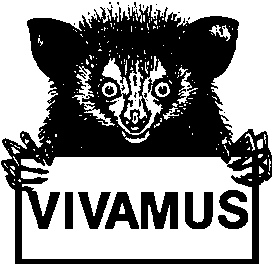 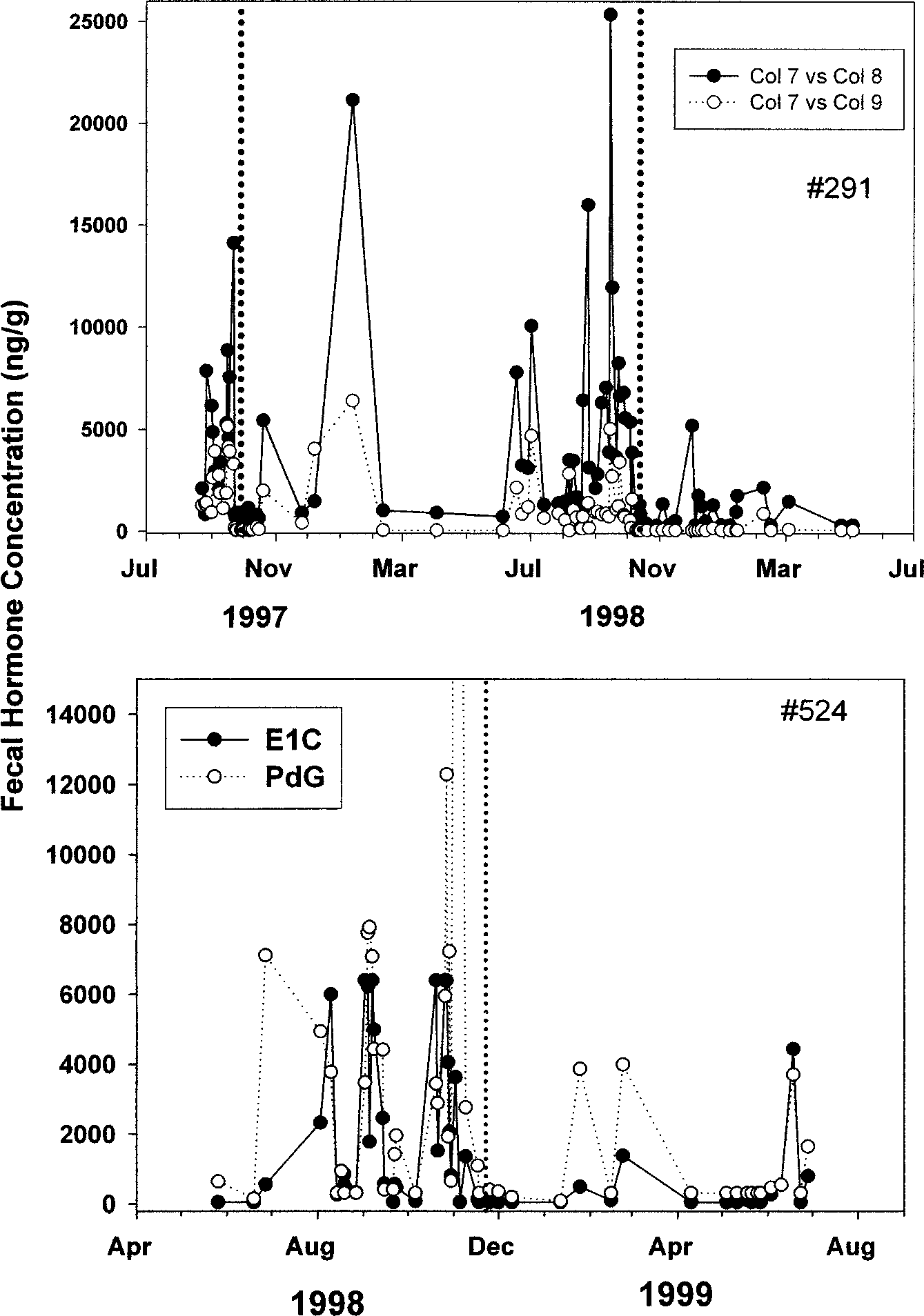 International Journal of Primatology [ijop] Endocrinology of Wild Lion Tamarins
Fig. 1. Fecal steroid profiles for two dominant, breeding females in different social groups in
Po¸co das Antas, across different reproductive phases. Vertical dotted lines represent dates of
parturition.
International Journal of Primatology [ijop] French, Bales, Baker, and Dietz
Table III. Means (±standard errors) for fecal pregnanediol glucuronide (PdG) and estro-
gen conjugates (E1C) for dominant reproductive females while non-pregnant and during each
trimester of pregnancy (n = number of females sampled during the period) 1052.32 ± 172.82 2086.98 ± 677.86 2905.18 ± 1082.22 4467.64 ± 884.93 1Pregnancy status was confirmed by back-dating from the day of parturition, assuming a 126 d 2Trimesters were defined as three successive 42 d periods during pregnancy, back-dated from The duration of elevated steroid concentration for both females is ca. 4 mo.
Table III lists mean values for PdG and E1C for non-pregnant females andfemales in each trimester of pregnancy. Although fecal sampling collectionoccurred less frequently outside the main breeding period, the low con-centrations from February through June/July suggest a seasonal period ofovarian quiescence. Concentrations of both PdG and E1C during pregnancytended to be above >5000 ng/g feces, and reached levels as high as 10,000 –15,000 ng/g (PdG) and 5,000 to 7,000 ng/g (E1C). Pregnant females (dom-inant and subordinate) had significantly higher concentrations of estrogenand progesterone metabolites than when they were not pregnant, by at leastone order of magnitude (F(1, 11) s > 23.70, p s < 0.001).
Comparison of Endocrine Function in Dominant and Subordinate Females
Social status clearly influenced levels of ovarian hormone excretion in nonpregnant females. Figure 2 presents mean concentrations of PdG andE1C measured in fecal samples collected from 9 subordinate females and 10dominant breeding females in varying stages of reproduction. We contrastedmean concentrations of hormones in all samples from nonpregnant females(Fig. 2a and b) and from pregnant dominant and subordinate females (Fig. 2cand d) as a function of their status in the group: reproductively inactive sub-ordinate, reproductively active subordinate, and dominant female. Levels ofPdG excretion are significantly lower in subordinate females than in domi-nant females (F(2, 15) = 4.76, p < 0.02), regardless of whether subordinatesultimately became pregnant or not. While levels of E1C tended to be lowerin subordinates than in dominant females, the differences are not significant(F(2, 15) = 1.55, n.s.). Pregnancy status of females was clearly reflected infecal concentrations of PdG and E1C, (Fig. 2c and d). Pregnant subordi-nates had PdG concentrations that do not differ significantly from those of 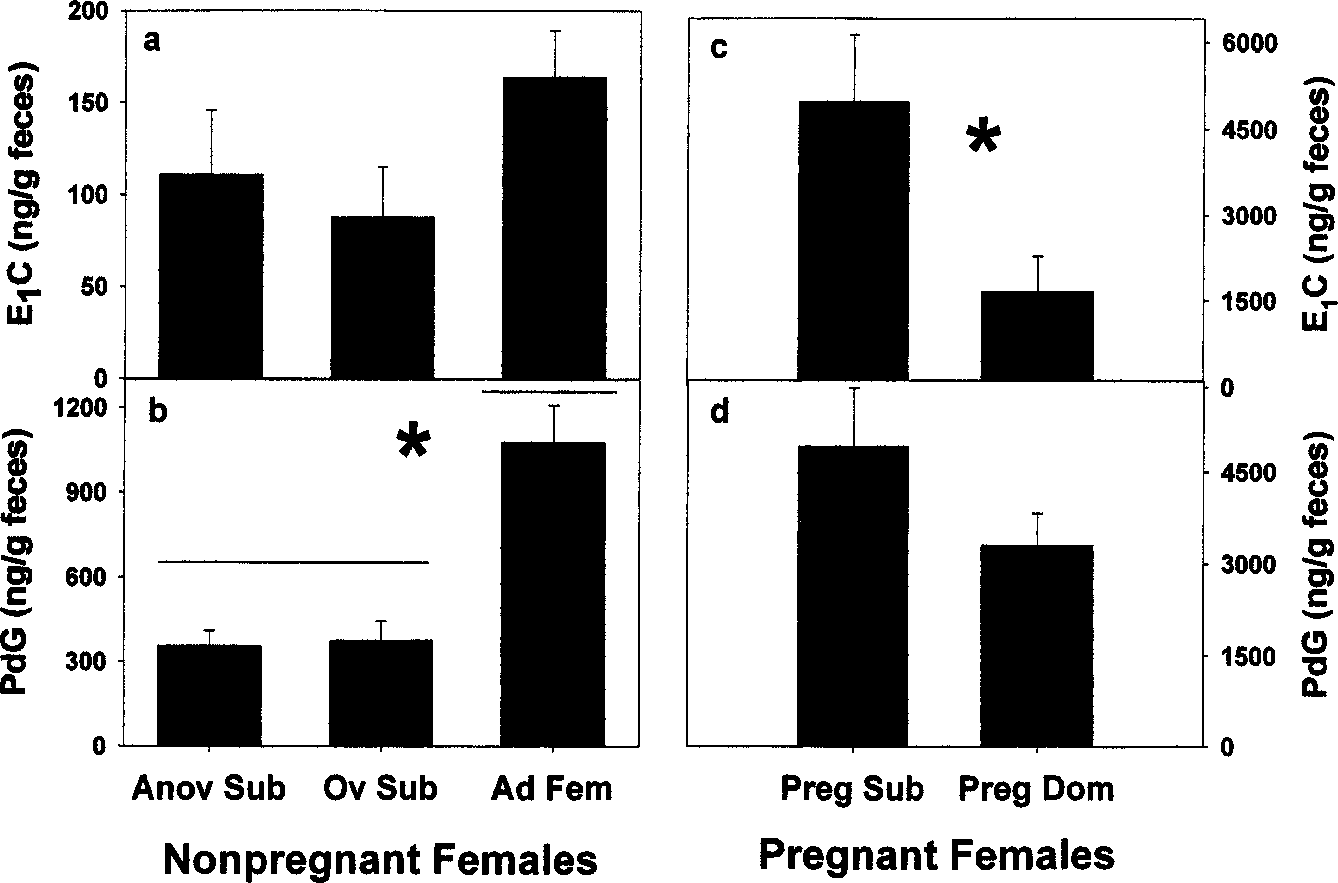 International Journal of Primatology [ijop] Endocrinology of Wild Lion Tamarins
Fig. 2. Mean concentrations of fecal E1C and PdG in females as a function of reproductive
and social status in the group (anovulatory and ovulatory subordinates vs. dominant adult
females (a and b) and for pregnant females that varied in social status (c and d). Note the
different scales for the Y-axes on panels 3c and d. Anov Sub = noncycling subordinate female;
Ov Sub = ovulatory subordinate; Ad Fem = dominant breeding female; Preg Sub = pregnant
subordinate female; Preg Dom = pregnant dominant female.
dominant females (F(1, 11) = 2.11, n.s.). However, levels of E1C are signif-icantly higher in pregnant subordinates than levels in pregnant dominants(F(1, 11) = 6.33, p < 0.03).
Patterns of Fecal Steroid Excretion in Subordinate Females and Daughters
We collected 249 samples from 9 females identified as daughters or socially subordinate to a dominant breeding female. The females providedmultiple samples (range = 5 − 77, median number of samples = 33.5), andwe could therefore evaluate the resulting hormonal profiles qualitatively andquantitatively for signs of ovulation or pregnancy. In 5 females, there wasclear evidence of anovulatory status during part or all of the sampling period.
Figure 3 presents the profiles for 4 of them. Two of them (#685, #688, Fig. 3a,3b) were 1-yr-old daughters living in intact natal groups, and most samplescollected during this period had hormone concentrations at or just above theminimal level of sensitivity of the assays. Female #723 (Fig. 3c) had emigrated 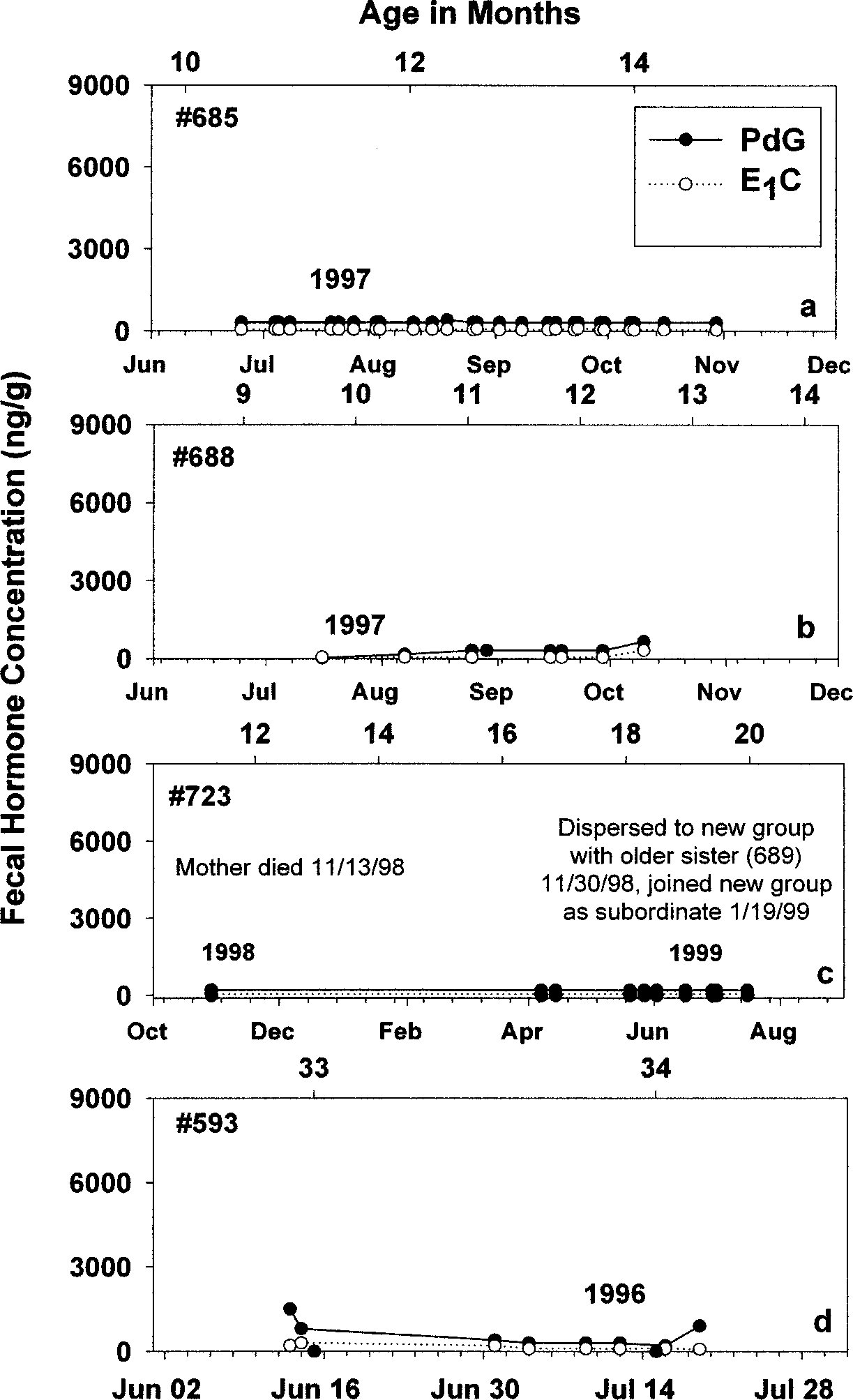 International Journal of Primatology [ijop] Fig. 3. Nonconceptive fecal steroid profiles for daughters and subordinate females in
the presence of mothers or behaviorally-dominant females. For the duration of most
of the sampling period for each female, there is little evidence for ovarian activity
and/or pregnancy. See Table I and text for details on each female.
International Journal of Primatology [ijop] Endocrinology of Wild Lion Tamarins
from her natal group as a 1-yr-old with her behaviorally-dominant sister(#689;) and joined a new group. Concentrations of fecal ovarian steroids for#723 never reached levels suggesting ovulatory function or pregnancy duringthe 1999 breeding season (Fig. 3c). Finally, there was no sign of ovarianactivity for #593 (Fig. 3d), a 2-yr-old daughter living in an intact natal group.
Two females well past the age of puberty were apparently anovulatory while residing in groups as subordinate females, but ovulated and becamepregnant when they became a dominant female in the group. Female #689(Fig. 4a) was sampled as both a 1- and 2-yr-old while in her natal familygroup. In both years (1997 and 1998), she showed no evidence of ovulatorycycles or pregnancy. Female #689 dispersed with a younger sister at ca. 26 moof age and joined a new group as a dominant female. Samples collected earlyin the breeding season revealed no sign of pregnancy in #689, though shemight have produced a singleton on 10/4/1999. We also noted a period ofsteroid excretion levels suggesting anovulation for #720, a 4-yr-old subordi-nate female in a group she joined gradually from January through July 1998(Fig. 4b). During the duration of her residence in the group as a subordinate(through February 1999), #720 showed low and acyclic concentrations ofovarian steroid excretion. However, her reproductive status changed whenher social status changed. In February 1999, the dominant female left thegroup, and in May 1999, #720 displayed quantitative and qualitative steroidexcretion profiles suggesting successful pregnancy. She delivered a set of twininfants on 9/28/99, which is 120 – 130 d after her hormone concentrationsbecame elevated (Figure 4b).
Finally, 2 subordinate females displayed evidence of normal ovarian function, including conception and pregnancy while they resided in socialgroups in the presence of a dominant female. Their profiles are in Figure 5aand b. Female #650 (Fig. 5a) was a 2-yr-old daughter residing in her intact na-tal group with her mother, the oldest breeding female in the study population(16 yrs). Female #650 had steroid excretion profiles suggesting pregnancy,both in terms of the period of elevation (ca 130 d) and in the concentrationsof steroids (multiple samples > 3, 000 ng/g feces). The dominant breedingfemale gave birth to infants on 9/25/97, after the date of apparent conceptionfor #650. The dominant female died on 11/5/97, 5 weeks after the birth ofher infants. The normal age of weaning in wild lion tamarins is ca. 12 weeksof age, and #650 was a primary carrier of the infants and also provided themwith animal prey. She remained with the infants after her father and brotherleft the group in apparent search of a new mate. No infant born to #650 wasseen by field staff, though the drop in steroid excretion in December suggeststhat her pregnancy was maintained for a normal gestation period.
Figure 5b portrays fecal steroid profiles for #603, a 3-yr-old in a group with her mother (#436) and multiple adult males that had entered the group 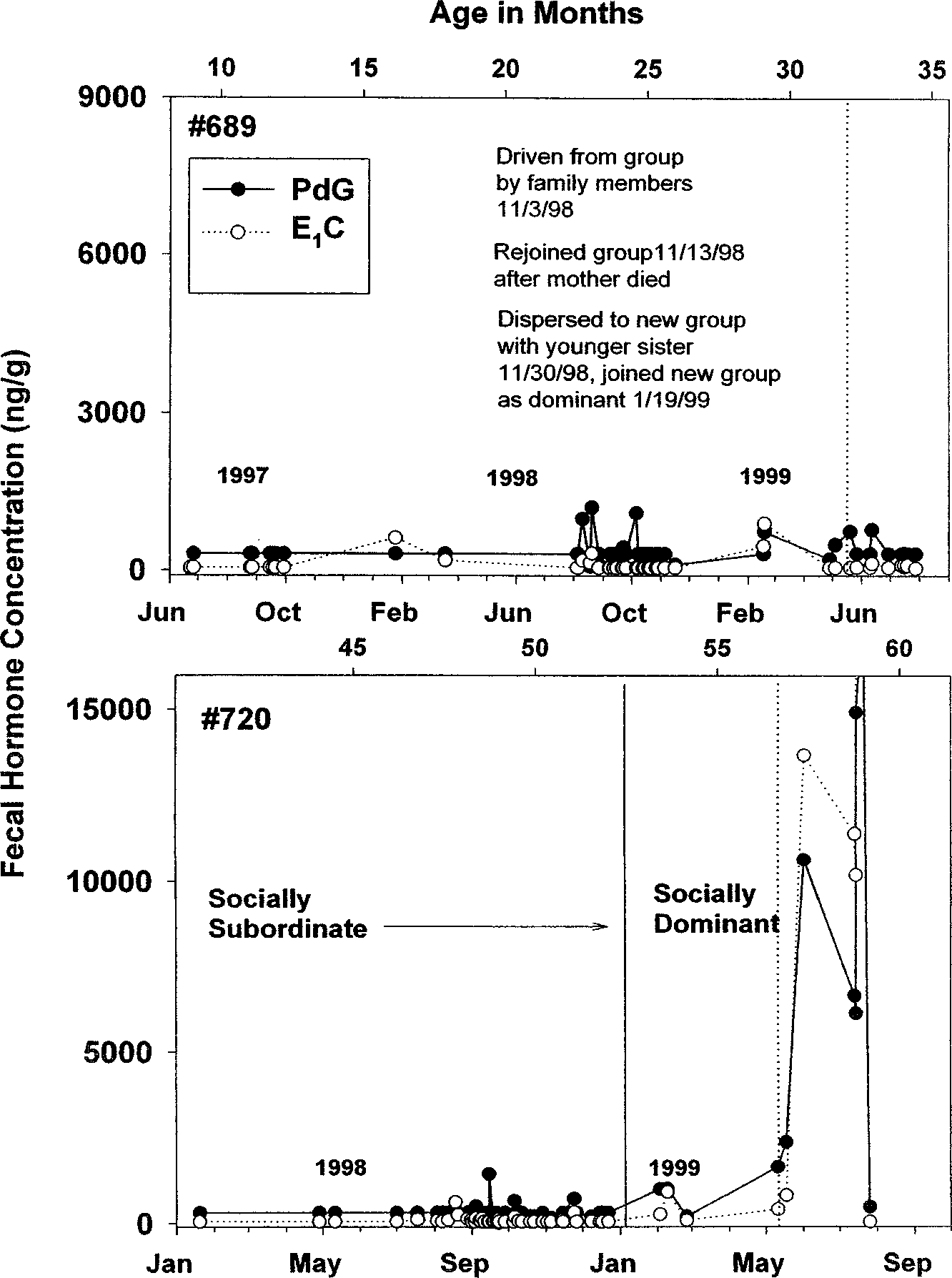 International Journal of Primatology [ijop] French, Bales, Baker, and Dietz
Fig. 4. Fecal steroid profiles in two females who displayed patterns suggesting infertility while
residing as subordinates in social groups, but then exhibited an onset of reproductive function
after changing groups (#689) and after changing status in a group (#720). Dotted vertical lines
indicate estimated dates of conception for each female. 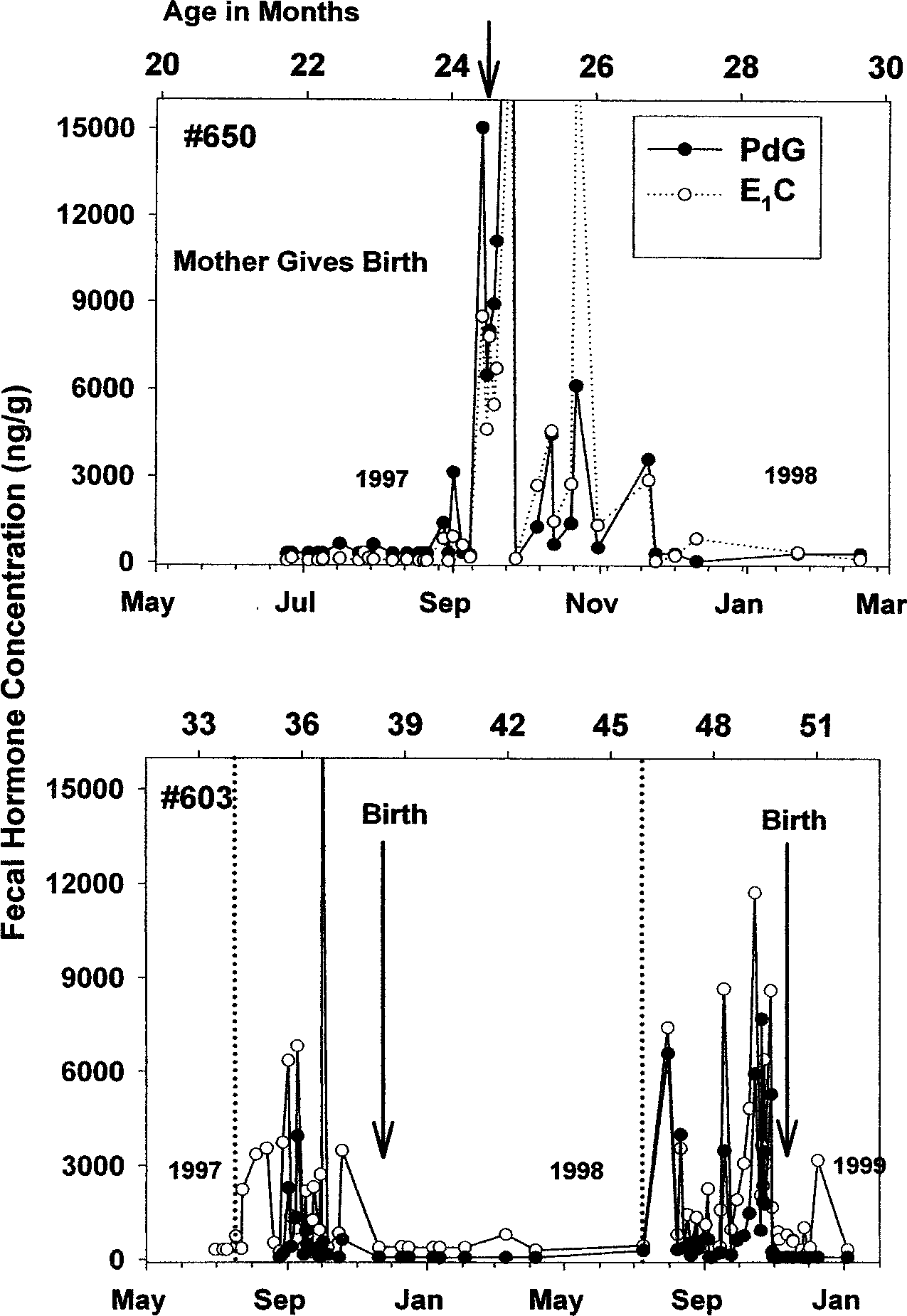 0 : Arrival at Taba or Sharm EL Sheikh international airport, meet and assist through formalities transfer to the hotel for dinner and overnight. In case of arriving at Sharm international airport; you'll be transferred to your hotel in Newibaa on the Aqaba Gulf (2 hours driving), and you leave to Newibaa port on the 2 nd day at noon time. 0 : Breakfast, drive to Newibaa port (65 Km.) f

LIFEWAVE ® IN-PROGRESS STUDIES Energy Enhancer® Double-blind, placebo controlled study to determine the efficacy of the LifeWave Energy Patch in improving fitness, strength, endurance and balance in 30 healthy humans . The assessments will include stretch and reach, lat pull downs, hand strength and various measures of performance on a stationary ergometer bicycle. The tests chosen