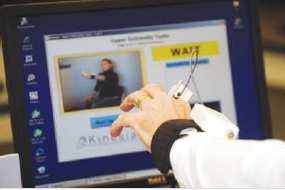 What began in 2003 as a weeklong pedaling excursion across the state of Iowa for biking enthusiast Dr. Jay Alberts ended up as more than just a challenge for his athletic abilities. Alberts, a neuroscientist with the Department of Biomedical Engineering in the Center for Neurological Restoration at the Cleveland Clinic, was intrigued by some of the comments made by his dear friend, Cathy, during the course of the trip. Cathy, who is living with Parkinson's disease, shared a tandem bike with Alberts on the 480-mile "Pedaling for Parkinson's" awareness ride. About 200 miles into the trip, both Alberts and Cathy noticed her symptoms disappearing. Notably, Cathy signed a birthday card with flair and legibility, without her eight-year-old tremor. Alberts then wondered, could exercise — specifically "assisted exercise," in which people are pushed to pedal beyond their normal limits — be therapeutic for Parkinson's disease patients? The possibility that Cathy's positive strides were related to tandem cycling sparked Alberts' interest further, and he decided to repeat the bike ride exercise in 2006. This time around, Alberts' biking partner was a Parkinson's patient who had been using deep brain stimulation, a surgically implanted, battery-operated medical device called a neurostimulator (similar to a heart pacemaker) to manage his symptoms, including rigidity, stiffness and tremors. For Alberts' study, the patient turned off his stimulator, got on the tandem bike and went off with Alberts on a five-mile journey. Alberts says that when the pair took a break, his partner grabbed a doughnut, held it in his hand and asked, "Where did my tremor go?" "We got back on the bike and finished the ride for the day. The patient went four hours without having to turn on the stimulator and was fine," Alberts says. A tandem try "We started asking ourselves, ‘What are the differences between a Parkinson's disease patient riding his or her own bike, and riding a tandem with an able-bodied cyclist?'" says Alberts. The question spurred his interest in exercise research for Parkinson's disease, with a focus on the paradigm of "forced exercise." The term is used mostly in animal research; it describes the process of requiring the animal to exercise at a rate faster than what it would voluntarily accomplish. One of the theories behind the tandem intervention is that the patient, with the help of a trainer, is forced to pedal at a rate greater than his or her voluntary rate. Alberts looked further into the idea of driving a patient's central nervous system beyond its normal capacity. The forced exercise might change or lead to other biochemical changes that underlie improvements in motor function.

About 50,000 Americans per year are diagnosed with Parkinson's disease, according to the National Institutes of Health. Parkinson's disease is a neurodegenerative disorder of the central nervous system that often impairs motor skills, speech and other functions. The disease belongs to a group of conditions called movement disorders and is characterized by muscle rigidity, tremor, slowing physical movement and, in extreme cases, a total loss of physical movement. "Everyone knows that people feel better with exercise," says Dr. Angela Ridgel, an assistant professor in exercise science in Kent State University's School of Exercise, Leisure and Sport. "Studies have had Parkinson's patients riding a bike or walking on a treadmill, but the disease causes the joints to get stiff, and once participants stop exercising, the benefits reaped are minimal." Ridgel, who began teaching at Kent State in fall 2008, previously spent five years working at Case Western Reserve University and two years at the Cleveland Clinic as a post-doctoral fellow in Alberts' laboratory. Her previous areas of study focused around neurosciences, anatomy and motor control. She says she also spent the last eight years as a tri-athlete and has a personal interest in studying the effects of exercise on the central nervous system. Previously, she used a model she developed from earlier research on the central nervous systems of insects to look at spinal cord injury and how injuries and/or diseases affect the nervous system. "Basically, you can change how the nervous system works in the absence of a normal circuitry," she says. "Parkinson's occurs when there is the disruption of normal neurons because some neurons die within the circuit. "The ability to transmit signals down the neuron road is disrupted or there is some sort of road block, which causes the slowness of movement and tremor in the hands and legs," she says. Typically, the brain sends signals to the various muscles in the body, and then there is a feedback loop, which tells the brain what the muscles are doing, Ridgel says. Once lost, the central nervous system neurons — seated deep within the brain structure — do not grow back. Once a person loses those neurons, they are gone. Ridgel says that what the research has uncovered is how the body might initiate neuron changes — or what is called neuroplasticity — in the absence of those cells. The forced exercise helps the central nervous system neurons modify activity. In a research study currently in press, Alberts and Ridgel discuss how forced, not voluntary, exercise improves motor function in Parkinson's disease patients. The study will be published in the 2009 Journal of Neurorehabilitation and Neural Repair. Ridgel explains that the study was a randomized trial in which there were two groups, a total of 10 people, ages 35 to 75, who are living with different stages of Parkinson's disease and have varying fitness levels. Participants were invited to join the study through Parkinson's support groups or by suggestion of their physician. Patients came to the Cleveland Clinic for eight weeks, three times a week for 40 minutes in 2007. One of the groups received the forced exercise, or assistance from a trainer on the tandem bike; the other group of participants exercised voluntarily (i.e., on their own). Ridgel explains that while a competitive cyclist like Lance Armstrong might pedal his bike at 90 to 100 revolutions per minute, the average cyclist pedals about 80 revolutions, and a Parkinson's patient, in contrast, about 60 revolutions per minute. The slowness of the movement caused by Parkinson's hinders a patient's ability to exercise rapidly, Ridgel says. "One of the problems with the tandem bike is that you need a strong trainer to exercise the patients," she says. "Some of the study participants were in decent shape, but some needed 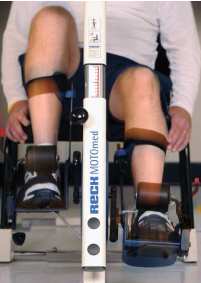 more assistance. The trainer ended up doing about 75 percent of the work, and the patient completed about 25 percent." After completing the forced exercise, the patients were then moved to MRI testing so the researchers could view any changes to the brain. The MRI results revealed an increase in brain function similar to that caused by L-dopa or Levodopa, the most common drug used to alleviate symptoms of Parkinson's disease, particularly tremor, rigidity and slow movements, Alberts says. Four weeks following the exercise, participants were brought back into the lab for post-testing. The first positive change the researchers found was that aerobic fitness levels in both groups improved. In addition, patients in the forced, or tandem bike, group displayed improved motor function, especially in the hands and the arms, but there was no improvement in the motor function of the voluntary group. Ridgel adds that the researchers also conducted a short-term study, where participants came into the lab for a single session of tandem biking. The participants underwent an MRI on the day of the biking activity and then returned for study on a day when they didn't participate in exercise. "Participants in the one-time forced exercise study exhibited a 35 to 40 percent improvement that seemed to last beyond the day of the exercise," she says. "That is why we are continuing with the short-term study." Ridgel is setting up a lab in Kent State's Gym Annex, home of the School of Exercise, Leisure and Sport, to continue the study. She also has recently purchased a motorized exercise bike1 from a company2 in Germany. "We didn't use a motorized bike before, because none of them went fast enough," she says. Then Ridgel discussed the need for a faster bike with the company, and they were able to reprogram the machine to go 90 revolutions per minute. She will utilize the bike for her upcoming research, which will extend the short-term study into summer 2009. "Despite all of the results we have from this study, we don't understand the mechanism that is providing us with this greater motor effect," Ridgel says. She hopes the current study will identify the optimal pedaling rate for Parkinson's patients to achieve the best results. "Is 85 revolutions per minute optimal? It might not be. Maybe 90 revolutions per minute is the best speed," she says. To date, the best theory she has as to why forced exercise has such a positive impact on patients is that, even though the participants aren't using a lot of their own energy to create muscle activity, the central nervous system neurons are being pushed to become active. "The beauty of the exercise is that it works on everyone, because everyone has sensory neurons," Ridgel says. No-frills treatment Alberts says that one of the reasons he is so intrigued by the forced exercise research is because it is a relatively simple intervention that seems to reap great benefits. "It doesn't require a lot of fancy equipment or medications. There are side effects to medication, and as patients take medications, their effectiveness tends to decrease over time," he explains. Deep brain stimulation also presents risks, Alberts says, because of the surgical implantation of the electrodes and potential side effects of the treatment. "We're not seeing any negative effects with this forced exercise intervention," he says. "We all know that exercise is good for you, and if we can improve brain function too, that's pretty exciting." ¹MOTOmed viva2, ² RECK-Technik GmbH & Co.KG, Betzenweiler, Germany www.motomed.com