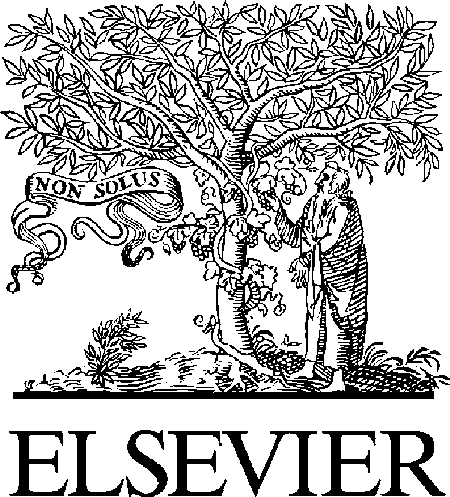 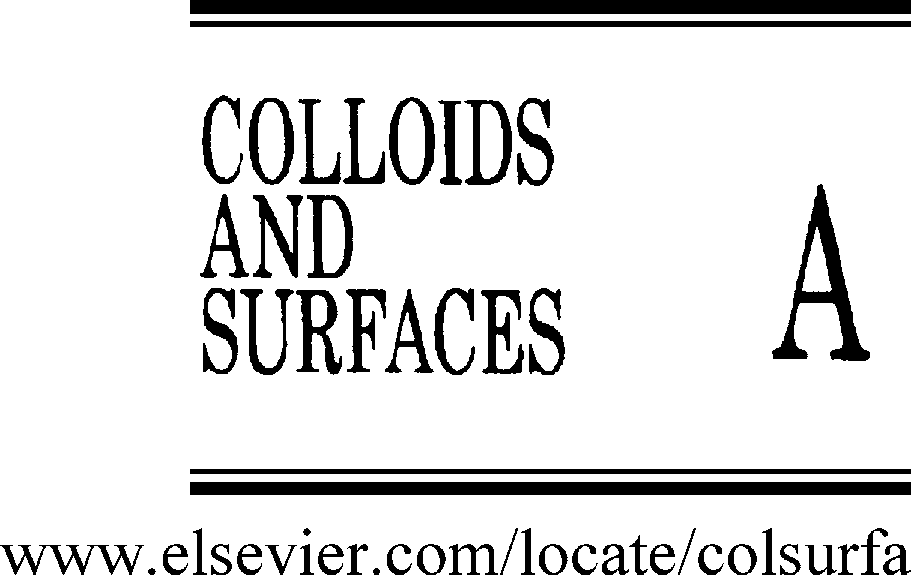 Colloids and Surfaces A: Physicochem. Eng. Aspects 249 (2004) 115–118 Studies of formation of W/O nano-emulsions M. Porras, C. Solans, C. Gonz´alez, A. Mart´ınez, A. Guinart, J.M. Guti´errez a Departament d’Enginyeria Qu´ımica i Metal·l´urgia, Universitat de Barcelona, Barcelona, Spain b Departament Tecnologia de Tensioactius, IIQAB-CSIC, Barcelona, Spain Abstract
In this work, formation of water-in-oil nano-emulsions in water/mixed nonionic surfactant/oil system has been studied by a condensation method. Several mixtures of Span 20, Span 80, Tween 20 and Tween 80 were studied. It has been proved that mixtures of surfactants can providebetter performance than pure surfactants. The appropriate ratio between two surfactants was studied. The existence of microemulsion, nano-emulsion and emulsion regions was investigated studying samples stability by evolution of backscattering with time multiple light scatteringtechnique. These studies allowed to determine zones where nano-emulsions can be formed. Droplet sizes were measured by dynamic lightscattering (DLS). Mean sizes between 30 and 120 nm were obtained; the higher the water concentration, the higher the size. On the otherhand, nano-emulsions stability was studied by dynamic light scattering. The results showed the evolution with time of the average radiusdroplet. For low water concentration, nano-emulsions breakdown could be attributed to Ostwald ripening; and for high water concentration,nano-emulsions breakdown could be attributed to coalescence.
2004 Elsevier B.V. All rights reserved.
Keywords: Span/Tween; W/O nano-emulsion; Mixed nonionic surfactant 1. Introduction
Nano-emulsions may possess high kinetic stability and op- tical transparency resembling to microemulsions It is well-known that certain mixtures of surfactants can emulsions can be used as micro reactors of controlled size provide better performance than pure surfactants for a wide for the preparation of monodisperse particles variety of applications It is interesting to disperse thebiggest quantity in water with the smallest quantity of sur-factant In this work, we used different surfactant mix- 2. Experimental
tures that show synergism in the dispersion of water in W/Onano-emulsions. The synergism can be defined like a situa- tion where surfactant mixtures provide better states of mini-mum energy than a simple alone surfactant Span 20 (S20), Span 80 (S80), Tween 20 (T20) and Tween Nano-emulsions are a class of emulsions with a droplet 80 (T80) technical grade were purchased from Sigma. N- size between 20 and 500 nm Their droplets are stabi- Decane (purity > 99%) was obtained from Panreac. Deion- lized by surfactants. They are not formed spontaneously, their ized water by Mili-Q filtration was used. The systems studied properties depend not only on thermodynamic conditions but were S80 T80/decane/water, S20 T80/decane/water and S20 on preparation methods and the order of addition of the com- ponents n the other hand, microemulsions are equi-librium structures distinctly different from emulsions ∗ Corresponding author. Tel.: +34 645975305; fax: +34 934021291.
Samples with constant surfactant/decane ratio in 5/95, E-mail address: [email protected] (M. Porras).
varying the ratio between Span and Tween surfactants and 0927-7757/$ – see front matter 2004 Elsevier B.V. All rights reserved.
doi:10.1016/j.colsurfa.2004.08.060 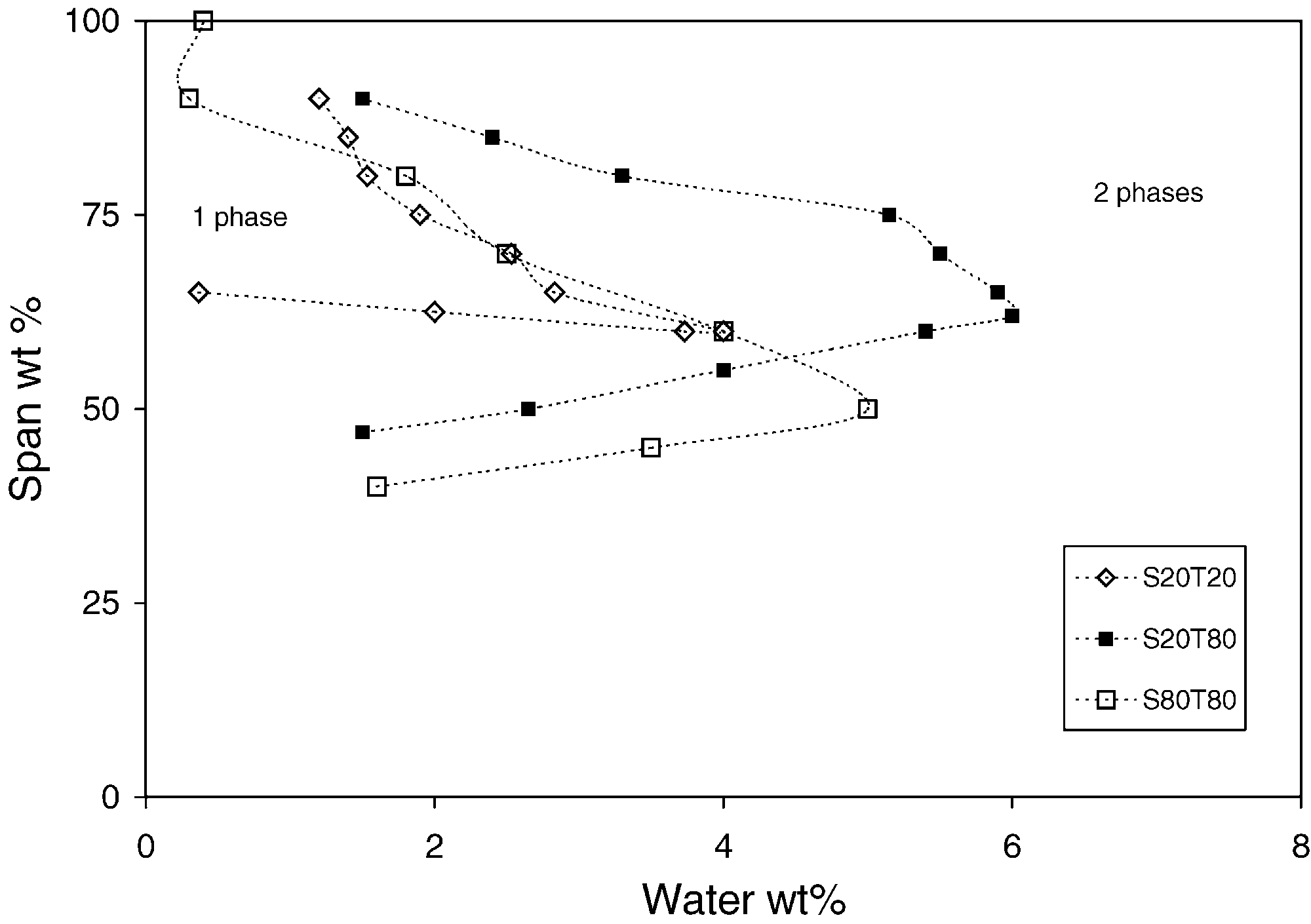 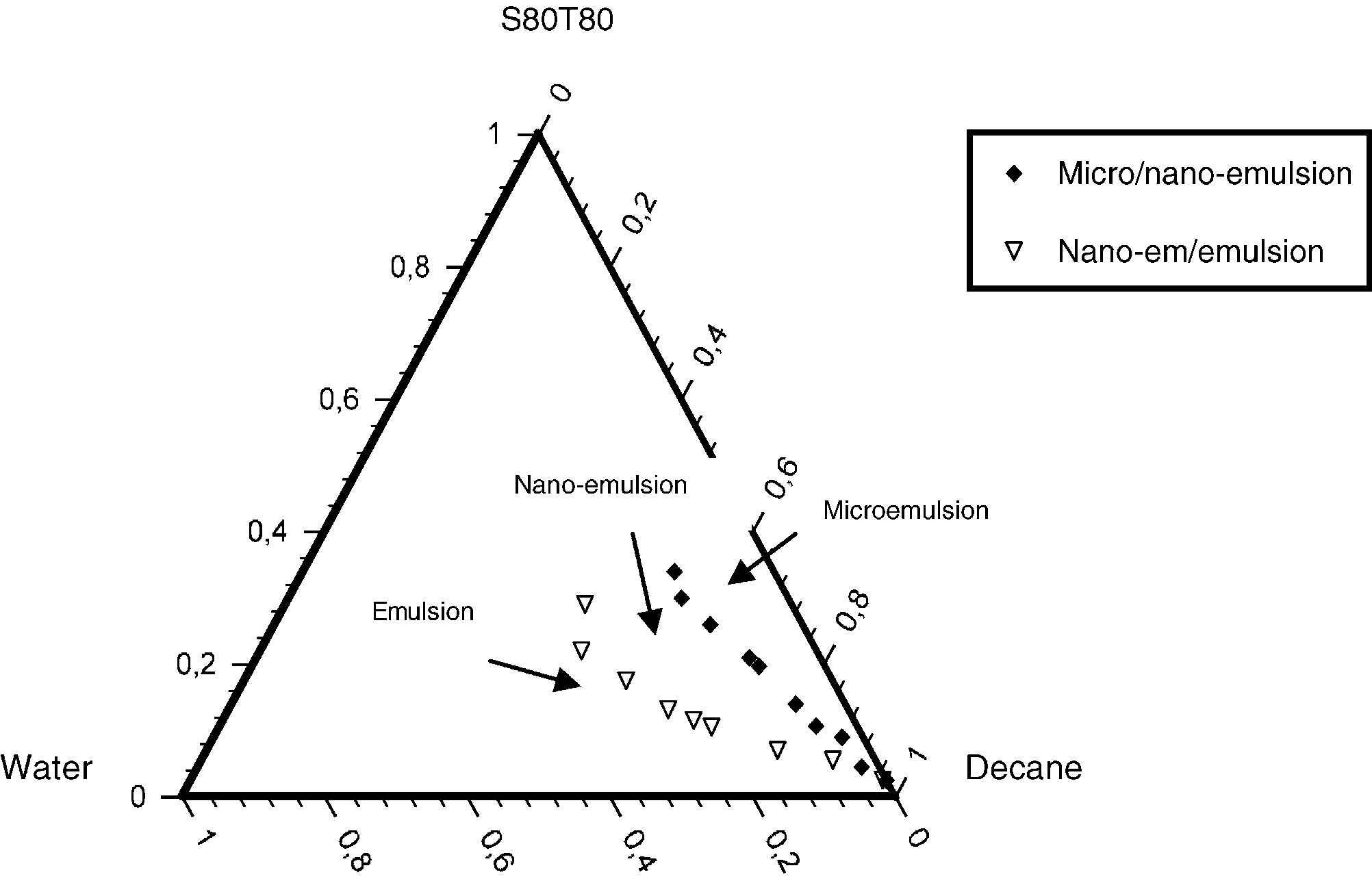 M. Porras et al. / Colloids and Surfaces A: Physicochem. Eng. Aspects 249 (2004) 115–118 the quantity of water, were prepared. All components wereweighed, sealed in ampoules, and homogenized with a vi-bromixer. The samples were kept at a constant temperatureof 25 ◦C.
The emulsions were formed by adding water to a mixture of the others components, using a magnetic stirrer at 700 rpmat 25 ◦C. The limit between the microemulsi´on region andnano-emulsion was determined observing the evolution ofthe back scattered light as a function of time. This study wascarried out with multiple light scattering at a wavelength of850 nm.
Nano-emulsions were prepared by adding water to a mix- Fig. 1. Maximum water solubilization (as a W/O microemulsi´on) vs. Span ture of Span–Tween and decane. The rate of addition was kept approximately constant, stirring at 700 rpm, all experimentswere run at 25 ◦C.
than 5 wt.%, water is not solubilized or dispersed in appre-ciable quantity, so it was considered that no microemul- sion or nano-emulsion regions were formed. The system Nano-emulsion droplet size was determined by dynamic formed with Span20–Tween80/decane/water has the biggest light scattering (DLS) with a Malvern 4700 instrument at microemulsi´on, nano-emulsion area. The system formed with Span20/Tween20/decane/water presents lower area than theothers systems studied.
The stability was measured at constant temperature (25 ◦C) by multiple light scattering and dynamic light scat-tering. A Turbiscan MA 2000 and a Malvern 4700 were used, The droplet size increases as the amount of water in- creases, for all the systems studied. For 15:85 surfac-tant:decane ratio the system with smaller droplet 3. Results and discussion
size is for S80 T80/decane/water. For 10:90 surfactant:decaneratio, the system with larger droplet size is for S20 T20/decane/water, but it is quite unstable due to the poly-dispersity of the system (data not showed).
This work has been carried out with several surfactant In this study, at a same concentration of dispersed phase, mixtures of Span and Tween. Three different surfactant mix- the droplet size decreases with the amount of surfactant due tures were investigated. ws water solubilization inwater-in-oil microemulsions for binary mixtures of Span andTween. The mixtures studied were S20 T80, S20 T80 andS80 T80.
The surfactant mixture that provided higher water solubi- lization was S20 T80. At the maximum level of solubilization,the ratio Span–Tween was 62:38 for S20 T80, 49:51 for S80T80 and 60:40 for S20 T20.
The studies permitted to determine zones where nano- emulsions can be formed (The samples were preparedwith the more suitable ratio of Span–Tween found as statedabove. The microemulsion, nano-emulsion and emulsion re-gions appear as water concentration increases for a constant Fig. 2. Existence regions of microemulsion, nano-emulsion and emulsion.
surfactant:decane ratio. For surfactant concentrations lower Span 80–Tween 80 (49:51)/decane/water. 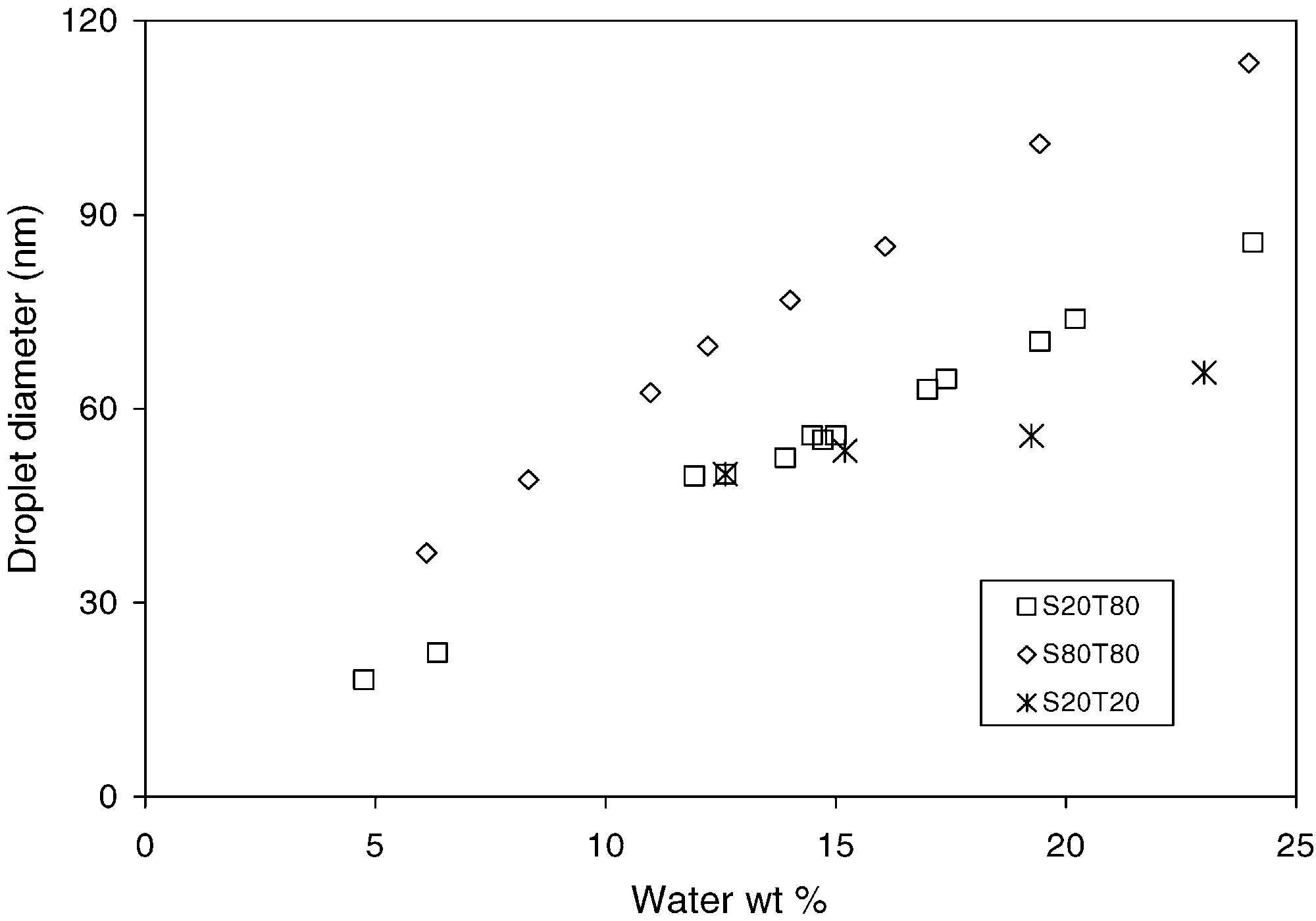 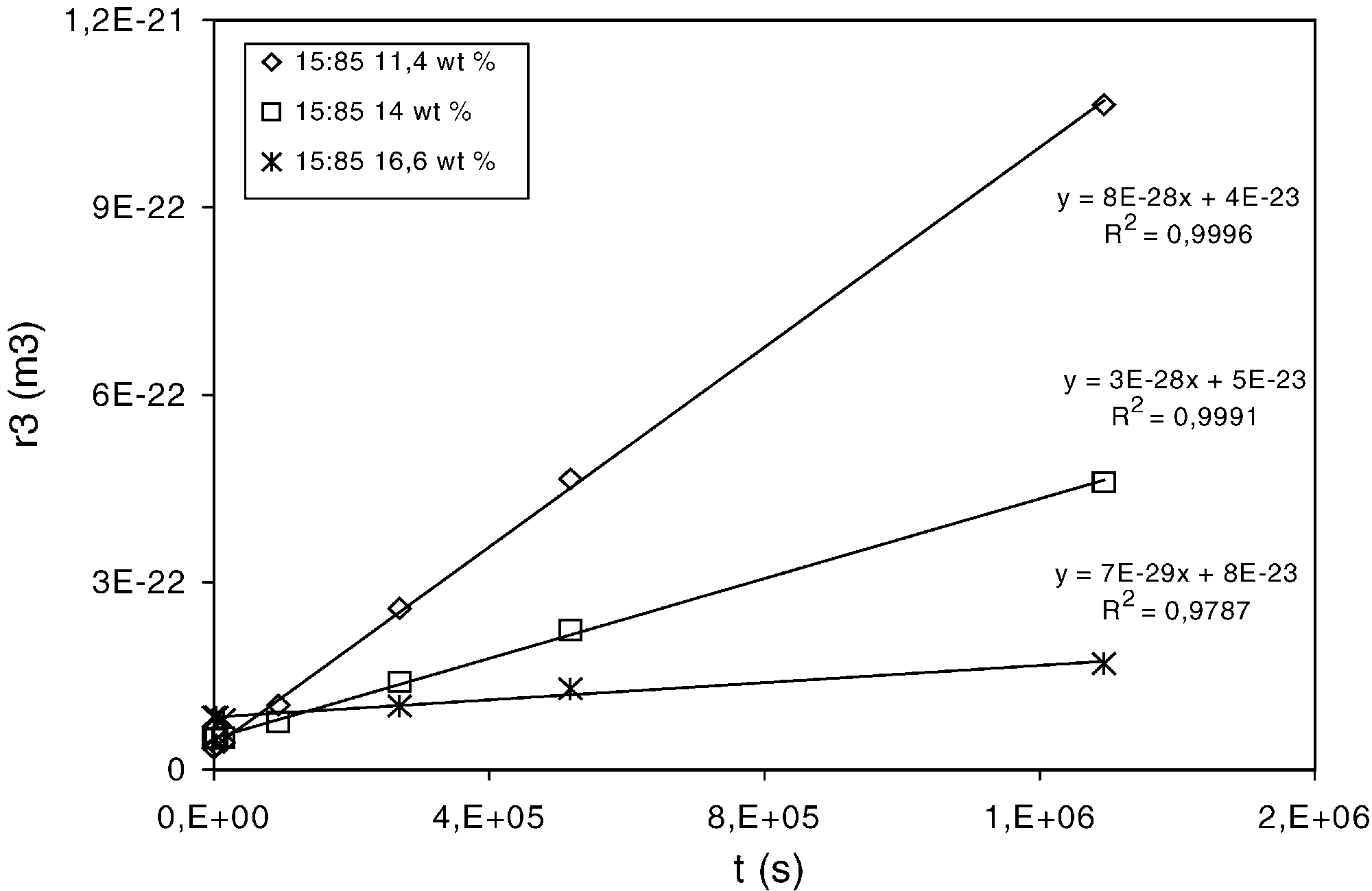 In the 1960's-70's, I grew up in the toxic crosshairs of a paper mill, steel mill and “secret” uranium processing plant and beside farm fields that were fertilized and pesticide-d right next to my open window. As a child I was sensitive to smells, soaps, metals, medicines and foods, which I later learned is called Multiple Chemical Sensitivity. Everyone in my family has the "nose of a bloo