Head Injuries and Helmet Laws in Australia and New Zealand
Victoria was the first Australian State to introduce bicycle helmet laws, on 1 July 1990. Over the next few years, all other States passed similar legislation, because of threats by the Federal Government to reduce
road funding if States failed to comply with a 10-point road safety program including bicycle helmet laws.
New Zealand (NZ) also introduced a bicycle helmet law in January 1994.[1] [2] [3] [4] [5]
Fig 1. Cyclists admitted to hospital in Victoria with/without head injuries
1) Did the laws work?
(from Carr et al. 1995)[1]
The effect of the laws can be determined by comparing injury rates before and after the laws were introduced. a) Victoria. Fig1 shows numbers of
cyclists admitted to hospital with and without head injuries before and after the helmet law. Both head and non-head injuries fell substantially. As shown later (section 3), surveys revealed lots of people were put off cycling. Fewer cyclists should mean fewer injuries. But if helmets were effective, head injuries should have fallen by more Fig 2. Percentages of NZ cyclists wearing helmets (%helmet)
than non-head injuries. Did they? Which line represents head injuries & with head injury (%HI, from Robinson 2001)[2]
Primary schoolchildren
b) New Zealand. Fig 2 compares
head injury (%HI) rates of primary
helmet wearing (%HW) increased
from 43% to 92%. If compulsory wearing is beneficial, there should %HI for accidents not involving motorvehicles of adults compared to primary school children. Fig 2 shows there wasn't; Fig 3. Percentage of hospital
What other explanation is there, except that admissions with head injury, WA
helmets are less effective at preventing head (from Hendrie et al. 1999)[3]
c) Western Australia. Fig 3 shows
percentages of hospital admissions involving head injury for all road users. Helmet wearing at the start of the data series was virtually nil, increasing to about 39% of cyclists just before the law was enacted on 1 Jan 1992, when helmet wearing increased to over 80%. The most dominant feature in Fig 3 is the declining trend in %HI common to all road users. Re-searchers in Victoria found a similar trend, but mistakenly concluded Fig 4. SA (from
helmets were remarkably effective. They didn’t bother to check that Marshall &
the same trend was evident for pedestrians, so had nothing to do White 1994)[4]
with helmets! If helmet laws are effective, it should be obvious from Helmet law
injuries (%)
the WA data when %HW increased from 39% to more than 80%. Can you tell which year it was? (Section 4 has more details.) d) South Australia (SA, Fig 4) shows declining trends in hospital
admissions for concussion, but not other head/face injuries, and again no obvious effect of a law that increased helmet wearing from % Head injured 15 Other
40-90%. The decrease in concussions was noted and explained: "it is understood that, since helmet wearing became compulsory, the head/face(%)
Concussion (%)
procedure for patients with a short episode of concussion has changed in that such patients are not now admitted routinely. [4] South Australia: year to end June 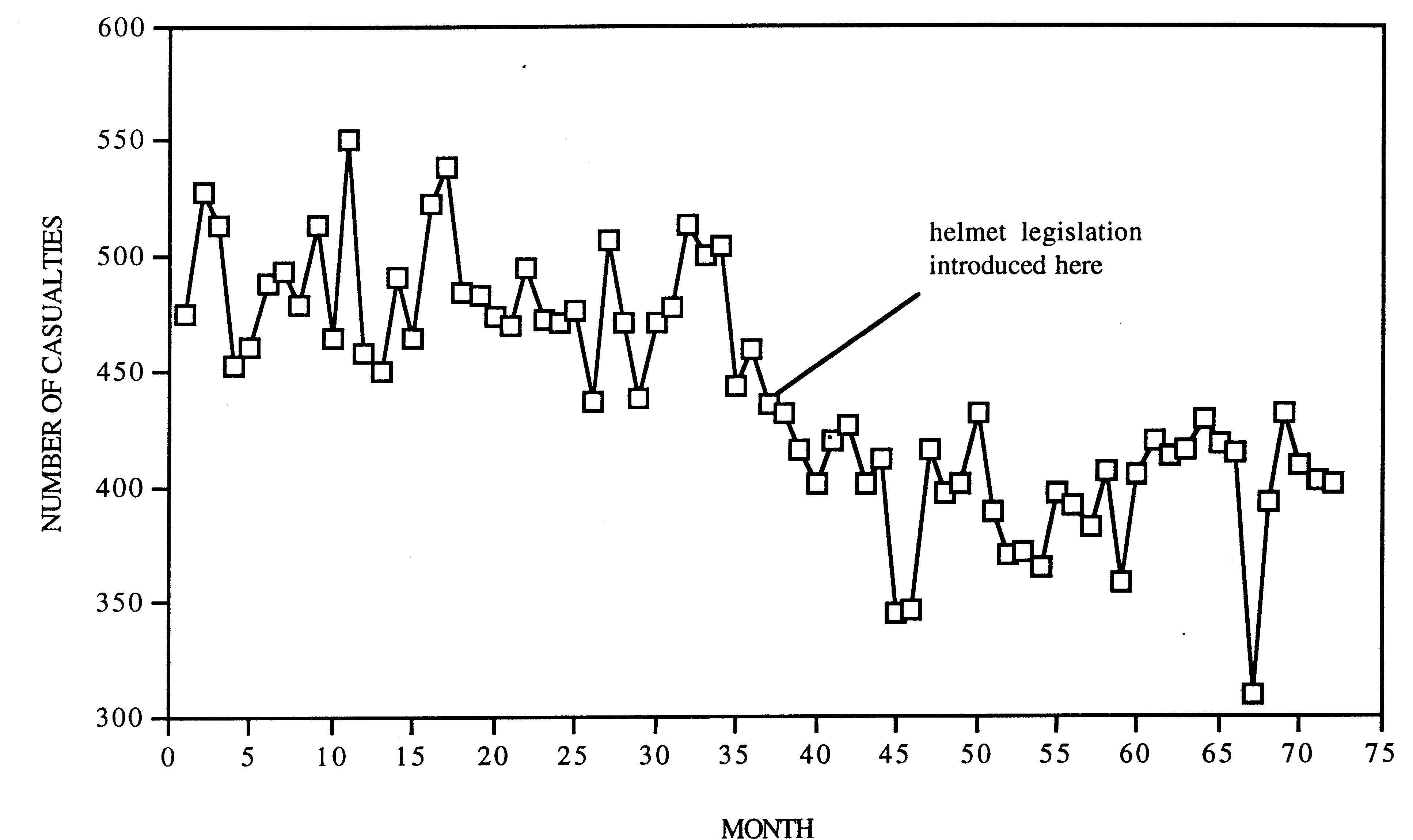 MEDICAL RELEASE AND INFORMATION I, _________________________________ (parent) give permission for Please Print: If Volunteer write “volunteer” in camper Willow Springs Water Park staff or camp volunteer to seek medical name space. Separate forms must be completed for each treatment (including hospitalization, injection, emergency dental care, or camper and volunteer. a