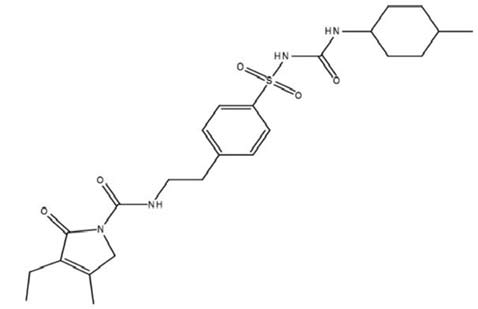 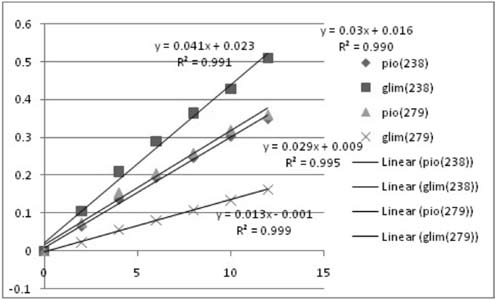 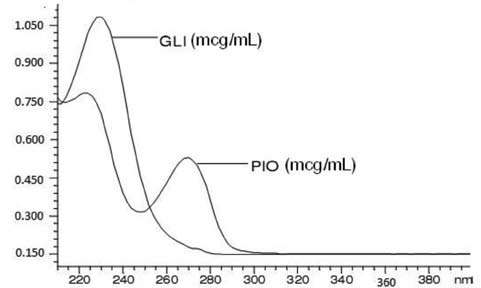 Fig. 1: Chemical structure of Pioglitazone
Fig. 3: Overlain spectra of Pioglitazone and Glimepiride
Fig. 2: Chemical structure of Glimepiride
was observed at 279 nm and 238 nm and then the concentration of both the drugs was calculated using equation 1 and 2.
Fig. 4: Linearity graphs
drugs (Table I). Regression analysis was made for The overlain spectrum (Fig. 3) of pioglitazone the slope (m), intercept (c) and correlation coefficient and glimepiride was found to be appropriate for the (R) as shown in Table I. Higher values of correlation estimation of both the drugs. based on the point of coefficient (R) indicate good linearity of the calibration maximum absorbance the λ of pioglitazone and curve for both the drugs as shown in Fig. 4. glimepiride was found to be 279 and 238 nm. The response for Pioglitazone was found to be linear in the concentration range of 2 – 30 µg/mL at 279 determined by inter- and intra-day precision methods. nm with correlation coefficient of 0.9904 (Table 1). The results varied between 98.34 and 98.4 % in Similarly, the derivative response for the glimepiride case of inter-day precision for simultaneous equation was found to be linear in the concentration range of method while in case of intra-day precision it ranged 1 - 20 µg/mL at 238 nm with correlation coefficient between 98.12%and98.57%. %RSD calculated was found to be less than 2 indicating the accuracy and reproducibility of the method. Results are shown in Amount of pioglitazone and glimepiride in marketed formulation determined by the proposed method ranges between 98.80 and 99.20 % The accuracy of the method was proved by for simultaneous equation method as shown in performing recovery studies on the commercial formulation at 80, 100 and 120% level. Recovery range a from 99.50 to 100.83% in simultaneous Linearity for detector response was observed equation method (Table Iv). The results of recovery in the concentration range of 1 – 20 µg/ml for both study indicate that these drugs could be quantified simultaneously and that there was no interference of method forthe Determination of Pioglitazone in Rat Serum, the excipients present in the formulation. The limits International Journal of Pharmaceutical Sciences and
Drug Research. 2011, 3(1), 38-41.
of detection and limit of quantification for pioglitazone 4. Srinivasulu D, Sastry b.S. and omprakash G.: and glimepiride are shown in table v.
Development and validation of New Rp Hplc method for Determination of Pioglitazone HCl in Pharmaceutical DISCUSSION
Dosage Forms, Int J Chem Res. 2010, 1(1), 18-20.
5. Lakshmi K.S, Rajesh T. and Sharma S.: Determination The developed method involves formation and of Pioglitazone and Glimepiride in Pharmaceutical solving of simultaneous equation which is further Formulations and Rat Plasma by Rp-Lc, International
based on absorptivity coefficients of two drugs at Journal of Pharm Tech Research. 2009, 1(3),
wavelength maxima of pioglitazone and glimepiride. After the measurement of absorbance of sample 6. Havaldar Fh. and vairal Dl.: Simultaneous estimation of Glimepiride, Rosiglitazone and Pioglitazone Hydrochloride solution at both the wavelengths the amount of in the Pharmaceutical Dosage Form, E-Journal of
drug in the sample can be found by substituting Chemistry. 2010, 7(4), 1326-1333.
the values in the two equations (eqs. 1 and 2). The 7. madhukar A, Naresh K, Kumar CH.N, Sandhya N. and framed equation was validated as per ICH guidelines. Prasanna P.: Rapid and Sensitive Rp-Hplc Analytical method Statistical analysis and drug recovery data showed that Development And validation of Pioglitazone Hydrochloride,
Der Pharmacia Lettre. 2011, 3(3), 128-132.
simultaneous estimation method was simple, rapid, 8. Karthik A, Subramanian G, mallikarjuna Rao C, economical, sensitive, precise and accurate and can bhat K, Ranjithkumar A, musmade P, Surulivelrajan thereby be easily adopted for routine quality control m, Karthikeyan K. and Udupa N.: Simultaneous analysis. Results of this analysis confirmed that the Determination of Pioglitazone and Glimepiride In bulk Drug and Pharmaceutical Dosage form by Rp-Hplc method, proposed method was suitable for the simultaneous Pak. J. Pharm. Sci. 2008, 21(4), 421-425.
determination of these drugs in pharmaceutical 9. Khedekar P.b, Dhole S.m. and bhusari K.P.: Application formulations with virtual y no interference of the of vierodt’s and Absorption Correction Spectrophotometric additives. Hence, the proposed method can be methods for estimation of Rosiglitazone maleate and successfully applied in simultaneous estimation of Glimepiride in Tablets, Digest Journal of Nanomaterials
and Biostructures. 2010, 5(1), 77 – 84.
PIo and GLIm in marketed formulations.
10. Samala S, Tatipamula S.R. and veeresham C.: Determination of Glimepiride in Rat Serum by Rp-Hplc 5. ACKNOWLEDGEMENTS:
method, American Journal of Analytical Chemistry.
The authors are thankful to KLe College of 11. Khan I.U, Aslam F, Ashfaq m. and Asghar m.N.: Pharmacy belgaum for providing al facilities to Determination of glimepiride in pharmaceutical formulations complete the work, Sun Pharma Limited, Jammu using HPLC and first-derivative spectrophotometric for providing pioglitazone and glimipiride, S. D. methods, Journal of Analytical Chemistry. 2009, 64(2),
Fine chem. Ltd, mumbai for providing sodium lauryl 12. Rubina R, bhagya Lakshmi J. and Ravi T.K.: Studies on Formulation and In vitro evaluation of Glimepiride Floating
Tablets, C. J. Chem. Pharm. Res. 2011, 3(3), 159-164.
REFERENCES
13. ICH Topic Q 2 (R1) validation of Analytical Procedures: 1. Shakya P. and Singh K.: Determination of Pioglitazone Text and methodology, note for guidance on validation Hydrochloride in bulk and Pharmaceutical Formulations of analytical procedures: text and methodology (CPmP/ by Uv Spectrophotometric method, International Journal
of Pharmaceutical Sciences and Research. 2010,1(11),
14. International Conference on Harmonization; Draft Guidance on specifications: Test Procedures and 2. mishra K, Soni H, Nayak G, Patel S.S. and Singhai A.K.: Acceptance Criteria for New Drug Substances and Development and validation of A Rp-Hplc method for Products: Chemical Substances, Federal Register estimation of Glimepiride in Tablet Dosage Form, IJPI’s (Notices). 2000, 65(251), 83041–83063.
Journal of Analytical Chemistry. 2011,1(3), 1-8.
15. FDA, Analytical Procedures and methods validation: 3. Ravikanth CH, Kumar A.A, Kiran v.U, Prashanth S, Chemistry, manufacturing, and Controls, Federal Register madhu b. and Reddy Y.N.: Sensitive and Rapid Hplc (Notices). 2000, 65(169), 52,776– 52,777.