Fig. 1. The disorder hierarchy as built in AERO, under the ogms:disorder class.The class adverse event rash is logically
defined as the intersection of disorder resulting from an adverse event process and rash.
(’adding a material entity into a target’ or ’administering substance in vivo’)) where the classes adding a material entity into a target and administering substance in vivo are imported from the Ontology of Biomedical Investigations (OBI) [27]. The AERO definition of adverse event processis meant to be inclusive, and cover cases such as those described by the Manufacturer and User FacilityDevice Experience (MAUDE); for example the case of a patient fitted with bioprosthetic heart valves whodies within the following 4 months3. It is also worth noting that this definition of adverse event doesn’timply causation between the sign observed and the coumpond administration/device utilization, but israther based on temporal association.
The adverse event continuant hierarchy was built under the ogms:disorder class (Figure 1), which is de- fined as “A material entity which is clinically abnormal and part of an extended organism. Disorders arethe physical basis of disease.” To avoid any language ambiguity by associating the terms event and con-tinuant in the label of the class adverse event continuant, it was renamed disorder resulting from an adverseevent process. As a general way of overcoming the potential issue between terms in use by clinicians and on-tological usage in the context of the OBO Foundry, in which it may be confusing to associate the word“event” to a hierarchical position under continuant, we chose to rely on the OBO Foundry unique labelIAO annotation property (http://purl.obolibrary.org/obo/IAO_0000589). Classes such as ad-verse event rash (EquivalentTo: disorder resulting from an adverse event process andrash) will therefore have an OBO Foundry unique label annotation with value “rash resulting from anadverse event process”, which can be processed by the OBO package manager currently being written bythe OBO Foundry.
Finally, as presented in the background section, adverse events definitions are based on the Brighton case definitions. We built under the IAO class directive information entity and defined a clinical guideline asa “A directive information entity that establishes a diagnostic based on a set of signs or symptoms” andits subclass Brighton case definition with definition “A clinical guideline in which a set of signs is describedto establish a diagnostic of adverse events with a related degree of certainty, as defined by the BrightonCollaboration, http://www.brightoncollaboration.org/”.
The resulting inferred hierarchy, presented in figure 2, shows how defined classes are positioned under 3 http://www.accessdata.fda.gov/scripts/cdrh/cfdocs/cfMAUDE/detail.cfm?mdrfoi__id= 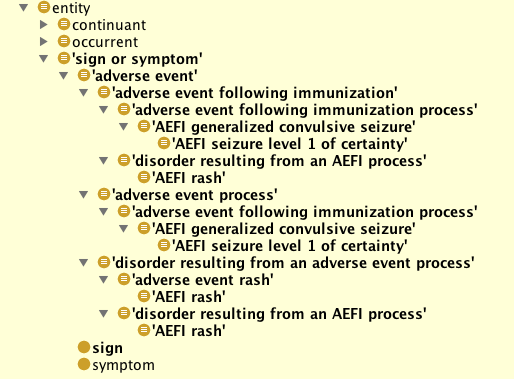 By scheduling your colonoscopy you have taken a key step in addressing your overall GI health. In doing so, you have given yourself the best chance at early detection of diseases that can impact your overall colon health and your quality of life. Our North Clinic doctors, as well as the staff at our procedure centers, are also committed to doing their part to ensure your procedure goes as smooth