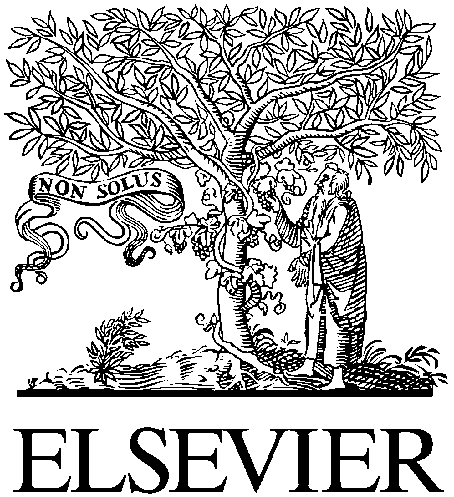 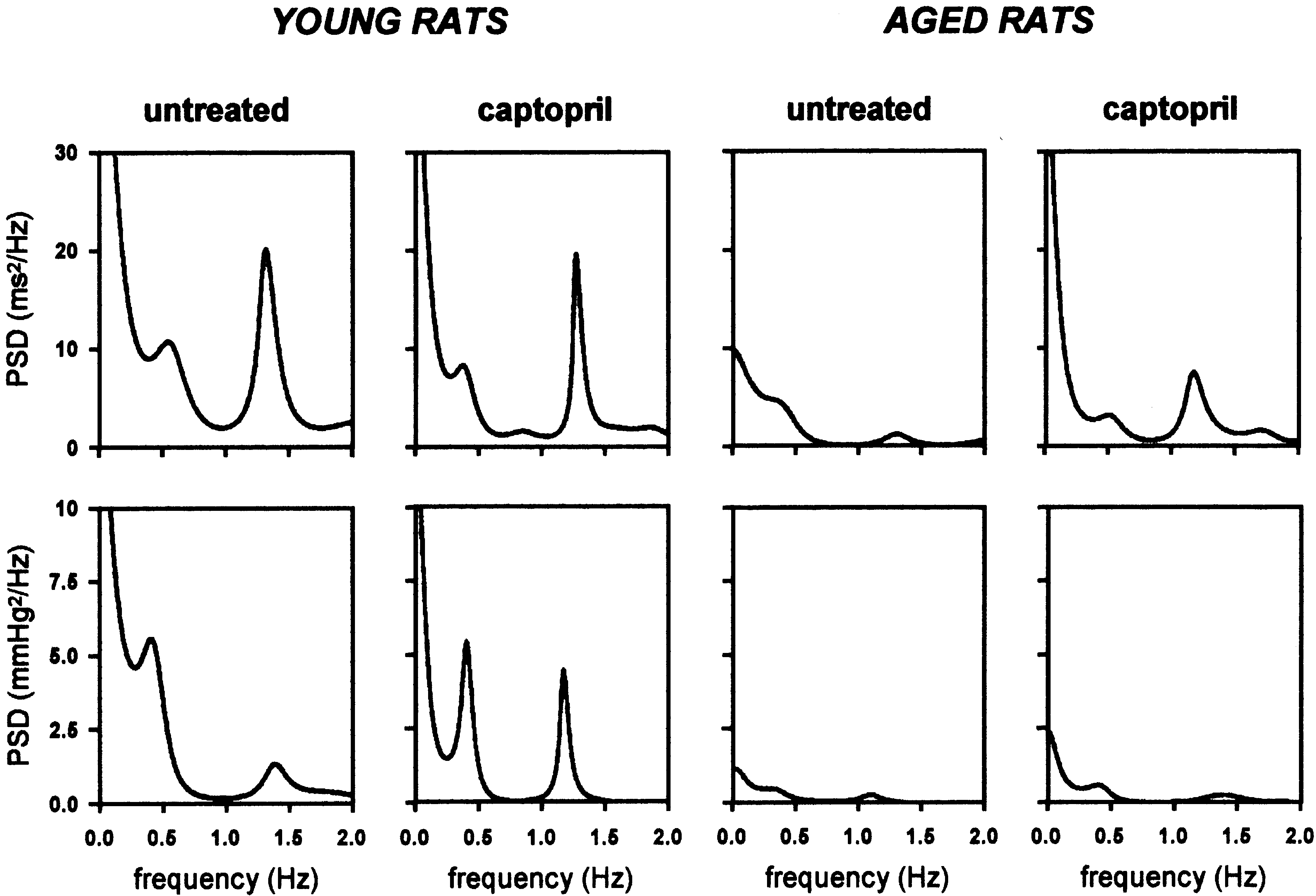 V.J. Dias da Silva et al. / Autonomic Neuroscience: Basic and Clinical 124 (2006) 49 – 55 Fig. 1. Examples of representative autoregressive spectra calculate from series of RR interval (ms2/Hz, top) and systolic arterial pressure (mm Hg2/Hz, bottom)of young and aged rats, untreated or chronically treated, with captopril. PSD = power spectral density.
treatment with captopril did not affect the MAP of young explanation may involve an increase in sensitivity to RAS rats, but decreased, significantly, the MAP of aged rats, as stimulation as observed in the kidneys of early aging rats compared to their untreated counterparts. The mechanism of the reduction of MAP of aged rats by means of captopril sensitive to blockage of ACE in peripheral tissues.
was not examined in the present study. A possible In the present study we are not able to detect a significant difference in baseline HR among young and aged rats.
Despite of the small number of animals, this finding seems Spectral parameters of RR interval (RRi) and systolic arterial pressure to confirm previous observations from the literature ( (SAP) calculated from time series using autoregressive spectral analysis and Bun˜ag, 1989; Werner et al., 1995, Irigoyen et al. 2000).
Despite that found no changes in HR in rats 7 to 18 months old, a lower HR was found in rats 28 to 31 months old. In the present study, prolonged (20 months) ACE inhibition with captopril reduced the basal HR of aged rats as compared with aged untreated rats. This finding may be related to changes of the sympatho/vagal balance to the heart, with a predominance of vagal activity in aged ratssubmitted to chronic ACE inhibition with captopril.
Aged untreated rats exhibited a smaller variability of HR as compared with young untreated rats. The reduced variability of HR is demonstrated by the significant attenuation of variance, which quantified the total variability of the time series of RRi. The spectral analysis of HR variability displayed also a significant reduction of the HF All values were expressed as mean T S.E.M.
TP < 0.05 versus young untreated rats, band, which is widely accepted as a marker of vagal .P < 0.05 versus aged untreated rats.
‘‘nu’’ indicates normalized units.
modulation of the heart associated with respiratory sinus 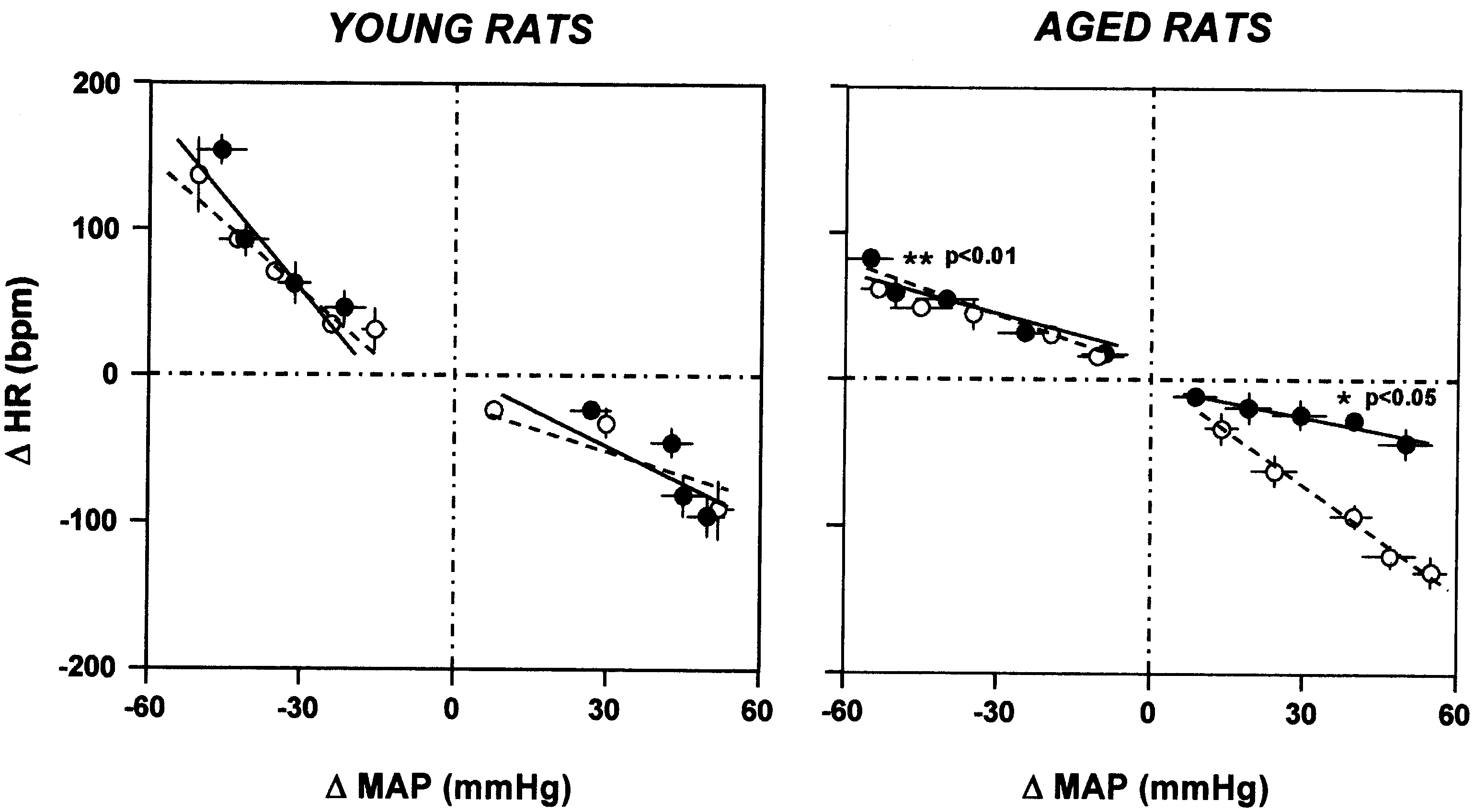 Health Questions on the Job: FAQ Q: I’ve applied for a new job and I have to take a drug test. The drug test form asks if I take any medication. What do I do? A: If you are taking any medication that may show a false positive on a drug test (for example, Sustiva or Marinol) you should be sure to list it on the form. Usually the test is performed not by your employer, but by an outsid

International Journal of Gynecology and Obstetrics (2007) 99, S156–S159a v a i l a b l e a t w w w. s c i e n c e d i r e c t . c o mw w w. e l s e v i e r. c o m / l o c a t e / i j g oAlthough misoprostol is generally not registered for repro-experiences have been described in other Latin Americanductive health use, it is widely used by gynecologists andobstetricians. In a survey on