NUVARING
NAME OF THE MEDICINAL PRODUCT
NuvaRing®
2. QUALITATIVE
QUANTITATIVE COMPOSITION
NuvaRing contains 11.7 mg etonogestrel and 2.7 mg ethinylestradiol. The ring releases etonogestrel and ethinylestradiol at an average amount of 0.120 mg and 0.015 mg, respectively per 24 hours, over a period of 3 weeks. For excipients, see 6.1. 3. PHARMACEUTICAL
NuvaRing is flexible, transparent, colorless to almost colorless ring, with an outer diameter of 54 mm and a cross-sectional diameter of 4 mm. 4. CLINICAL
PARTICULARS
4.1 Therapeutic
indications
NuvaRing is intended for women of fertile age. The safety and efficacy has been established in women aged 18 to 40 years. Posology and method of administration
The woman herself can insert NuvaRing in the vagina. The physician should advise the woman how to insert and remove NuvaRing. For insertion the woman should choose a position that is most comfortable for her, e.g. standing with one leg up, squatting, or lying down. NuvaRing should be compressed and inserted into the vagina until it feels comfortable. The exact position of NuvaRing in the vagina is not critical for the contraceptive effect of the ring (see Figures 1-4). Once NuvaRing has been inserted (see ‘How to start NUVARING’) it is left in the vagina continuously for 3 weeks. If NuvaRing is accidentally expelled (e.g. while removing a tampon), it can be rinsed with cool to lukewarm (not hot) water and should be reinserted immediately. NuvaRing must be removed after 3 weeks of use on the same day of the week as the ring was inserted. After a ring-free interval of one week a new ring is inserted (e.g. when NuvaRing is inserted on a Wednesday at about 22.00 h the ring should be removed again on the Wednesday 3 weeks later at about 22.00 h. The following Wednesday a new ring should be inserted). NuvaRing can be removed by hooking the index finger under the ring or by grasping the ring between the index and middle finger and pulling it out. The used ring should be placed in the sachet (keep out of the reach of children and pets) and discarded as described in Section 6.6. The withdrawal bleed usually starts 2-3 days after removal of NuvaRing and may not have finished completely before the next ring insertion is due. 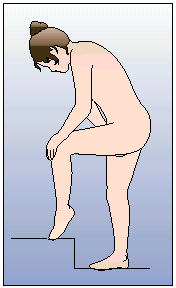