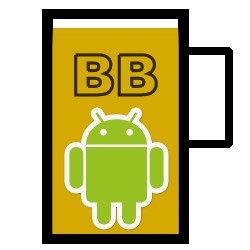 BeerBase
The world of beer in your phone
Group 3: BeerBaseAntti Turpeinen 0279034Lauri Hämäläinen 0258767Juho Tarikka 0260425 BeerBase is an Android application for beer enthusiasts. The name itself is a clever play with words “beer” and “database” which describes the main goal of this project: to have information about beers quickly available everywhere and every time on your mobile Android device. The application is designed for beer loving people who like to take notes and rate beers (mostly imported) they've drank.
BeerBase is an ideal application while tasting some beer on the road. Sometimes it's difficult to remember what you have been drinking, particularly in pubs and restaurants when you might not able to obtain the container. Majority of these places doesn't have computer for public Internet use also. Even remembering beer name correctly doesn't help because some beers are very close in style but can vary quality-wise. Adding beer to a mobile database on-the-fly helps keeping track your taste, so you don't waste time drinking bad beers again.
BeerBase's core is programmed with Java. Database structure was chosen for storing beer information. Graphical interface was simplified to contain mere buttons, text and image areas. BeerBase contains multiple basic features like adding new, removing and editing existing in the database. The more advanced features added to program are implementing pictures, rating with stars, notifications and commenting beers. Rating is indicated by slidable stars that user can set in 0.5 steps between one and five stars. A notification is shown in the Android notification area when saving beer details and user is asked for confirmation when removing a beer. This data is stored in a SQLite database and fetched when required. Implemented features are shown as screenshots on the next page. Different layouts are made with XML files which contains commands and descriptions for graphical elements shown in GUI. These layouts are main.xml(Image 1), beer.xml(Image 2,4) and picture.xml(Image 3). Additional features were planned but dropped due to course schedule.
For some reason the Android's camera button is disabled in emulator so green phone button is used for taking picture.
BeerBase is programmed with Eclipse using Java programming language, Android SDK plugins and emulator included in the SDK. Subclipse, a svn plugin for eclipse, was used to improve parallel programming. A vector graphic editor called Inkscape was used to create graphics for the project. Moccamaster, a coffee maker, was used to satisfy programmers' never ending lust for caffeine.
Application uses Android SDK's activities to create different graphical views. Each activity has it's own life cycle. In the application only one activity is running at the time which saves CPU usage. Activities defined strict directions of planning the application, which forced to make more encapsulated code. Communication between activities were made with Intents. Intents are messages which are delivered by Android's framework. 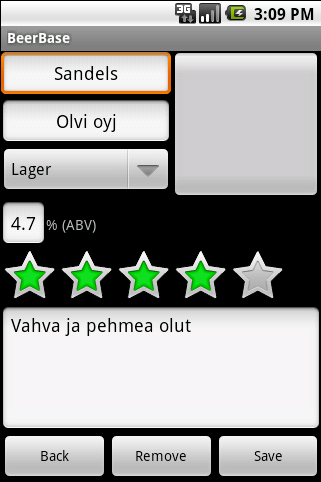 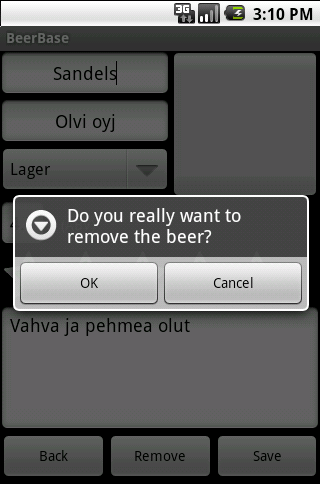 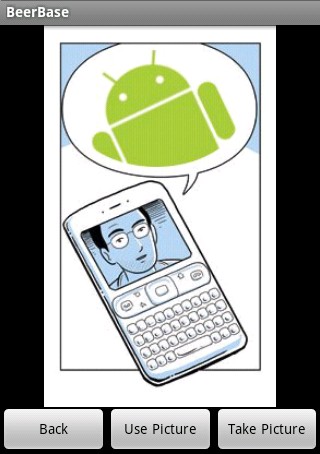 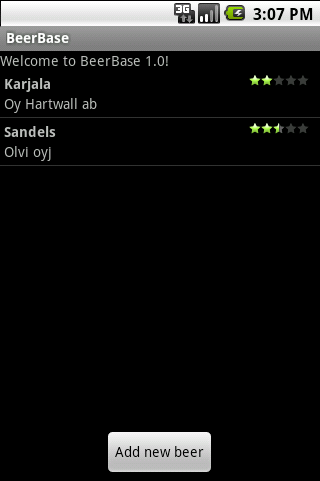 Android emulator gave a good emulation of the real device and was fast enough. Development framework is up to date and suitable for mobile devices. Although it isn't compatible with original Java, it didn't matter because we are not so familiar with SUN's Java. Framework's GUI could be user-friendlier also. Creating database gave little trouble because of the database file in the phone didn't update itself every time we drove the program. Of course there would've been option to reset all the user settings from the phone on every boot, but we didn't want to start emulator all the time. Implementation of the taking picture option were surprisingly easy thanks to Google's Android developing tutorial sites. Because course's intensive nature and strict time limit a number of features were planned but ultimately dropped from final release. These are remote database, link support, search function, database changelog, list sorting and default beer picture.
Otherwise course went fine but the used classroom needed improvements on ventilation. Lack of fresh air had a clear affect on concentration and thinking ability.