JOURNAL OF VIROLOGY, Feb. 2005, p. 1836–1841 0022-538X/05/$08.00ϩ0 doi:10.1128/JVI.79.3.1836–1841.2005Copyright 2005, American Society for Microbiology. All Rights Reserved.
Evidence for Heterogeneous Selective Pressures in the Evolution of the env Gene in Different Human Immunodeficiency Virus Simon A. A. Travers, Mary J. O’Connell, Grace P. McCormack, and James O. McInerney* Biology Department, National University of Ireland, Maynooth, County Kildare, Ireland Received 30 June 2004/Accepted 10 September 2004 Recent studies have demonstrated the emergence of human immunodeficiency virus type 1 (HIV-1) subtypes
with various levels of fitness. Using heterogeneous maximum-likelihood models of adaptive evolution imple-
mented in the PAML software package, with env sequences representing each HIV-1 group M subtype, we
examined the various intersubtype selective pressures operating across the env gene. We found heterogeneity
of evolutionary mechanisms between the different subtypes with a category of amino acid sites observed that
had undergone positive selection for subtypes C, F1, and G, while these sites had undergone purifying selection
in all other subtypes. Also, amino acid sites within subtypes A and K that had undergone purifying selection
were observed, while these sites had undergone positive selection in all other subtypes. The presence of such
sites indicates heterogeneity of selective pressures within HIV-1 group M subtype evolution that may account
for the various levels of fitness of the subtypes.
It has been hypothesized that human immunodeficiency vi- tion. Recently, more biologically realistic methods have been rus type 1 (HIV-1) may have entered humans in three inde- developed to allow for identification of heterogeneous selec- pendent transmissions of simian immunodeficiency virus from tion pressure across amino acid sites and also heterogeneity infected chimpanzees from which the three HIV-1 M, N, and across both sites and lineages within the phylogeny (32, 33).
O lineages arose (9). Within group M, nine phylogenetically Previous studies (4, 28) focused on searching for positive distinct subtypes have been proposed (subtypes A to D, F to H, selection within the HIV-1 group M subtypes by analyzing each J, and K), with subsubtypes being proposed for subtypes A and subtype independently and identifying amino acid sites with a F (18). Subtype distribution varies worldwide, with subtype B high probability of having undergone positive selection. How- predominating in North America and Europe (15) and subtype ever, Drummond et al. (6), referring to work by Seo et al. (20) C accounting for more than 55% of worldwide infections (7) as an example, suggested that positive selection seems to be a due mainly to its prevalence in Southern and Eastern Africa (1, minor contributor to the overall molecular evolution of HIV-1 2, 14, 17, 26) and India (21) and its increasing prevalence in and that negative (purifying) selection imposed by functional Brazil (22) and China (19). Biological differences including low constraints in HIV-1 is more important than positive selection.
CXCR4 coreceptor usage in subtype C (15), decreased pro- Here, we present an analysis of the likely selective pressures tease susceptibility in subtype G (5), and varying subtype re- that have affected HIV-1 group M env sequences in their di- activity to monoclonal antibodies (13, 25) have been observed versification from the original group M founder virus. We have among the subtypes. The production of broadly neutralizing or carried out this analysis by comparing each individual subtype subtype-specific vaccines requires an in-depth understanding to all other group M subtypes in an attempt to identify amino of the inter- and intrasubtype evolution.
acid sites whose evolutionary history appears to be unique in The study of the selective pressures governing the evolution terms of selective constraints for that subtype. The identifica- of protein-coding DNA sequences has traditionally been car- tion of such sites yields information as to unique subtype- ried out by comparing dN (nonsynonymous substitutions per specific molecular traits that may also manifest as unique bio- nonsynonymous site) to dS (synonymous substitutions per syn- onymous site), resulting in a dN-to-dS ratio (␻) (see reference31 for a review). An ␻ of Ͼ1 is indicative of positive selection, MATERIALS AND METHODS
an ␻ of 1 indicates neutral evolution, and an ␻ of Ͻ1 indicates Alignments. All available full-length envelope gene sequences were down-
purifying (negative) selection. However, if there is strong pu- loaded from the Los Alamos National Laboratory HIV sequence database rifying selection operating on the majority of amino acid po- (http://hiv-web.lanl.gov) and aligned by using MacClade (12), and neighbor-joining trees were produced for each subtype by using PAUPء (23). A subset of sitions, averaging ␻ over an entire sequence could misleadingly the full-length envelope gene sequences for each subtype was selected by choos- indicate purifying selection for the entire molecule even in the ing as diverse a range of sequences as possible within each subtype based on their presence of a small number of sites undergoing positive selec- spread through the subtype-specific trees (Table 1). Sequences with a largedegree of similarity contain much the same information, whereas divergent se-quences will contain more information about the intrasubtype diversity. Analignment of the representative sequences of each subtype was produced by using * Corresponding author. Mailing address: Bioinformatic and Phar- MacClade (12). Ambiguous regions of the alignment were removed to avoid macogenomics Laboratory, Biology Department, NUI Maynooth, May- possible false detection of positive selection due to alignment of nonhomologous nooth, County Kildare, Ireland. Phone: 353-1-708 3860. Fax: 353-1-708 sites. The resulting env data set contained 40 sequences and was 764 codons in 3845. E-mail: [email protected] 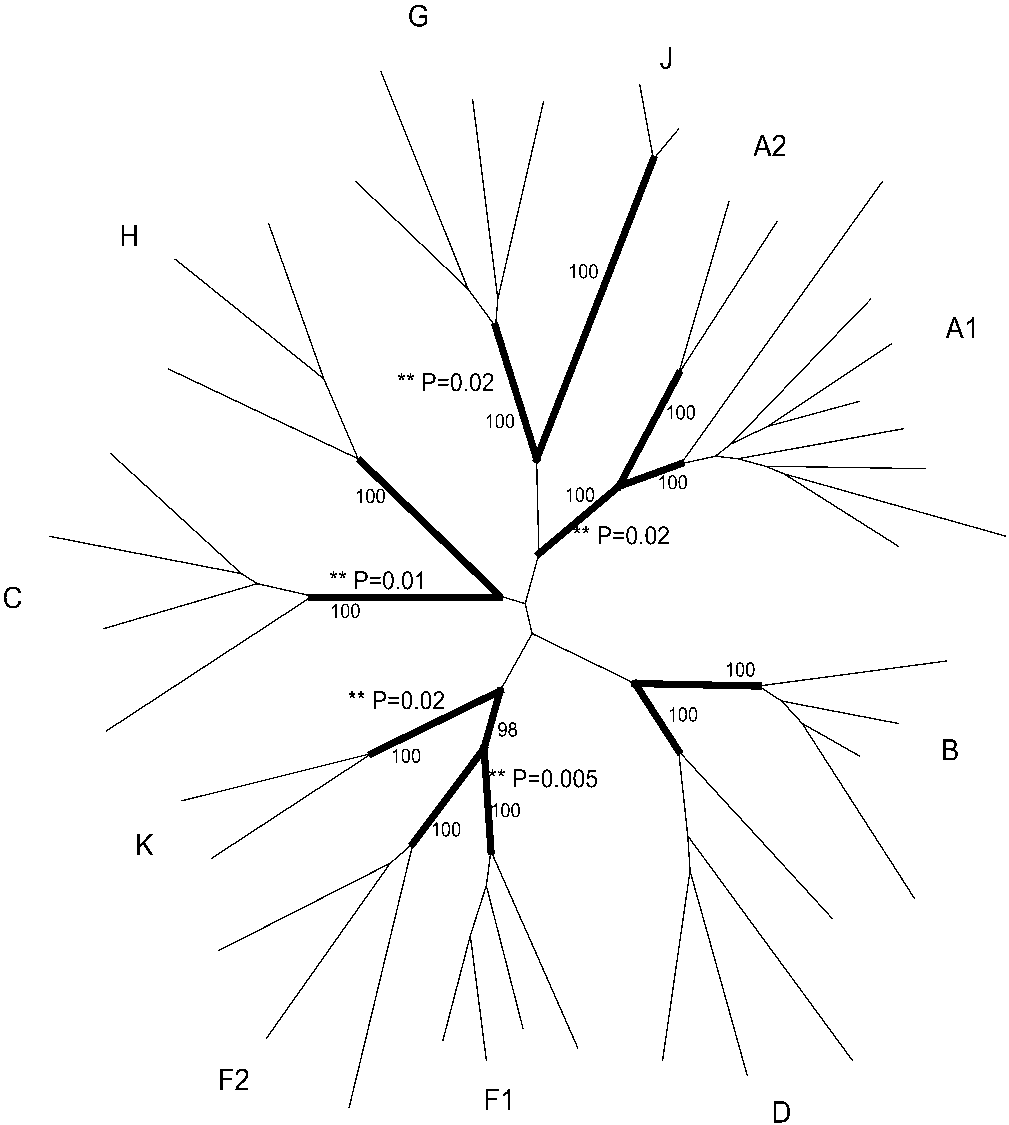 TABLE 2. Selected sites for each subtypea C (P ϭ 0.01), F1 (P ϭ 0.005), G (P ϭ 0.02), and K (P ϭ 0.02),suggesting that these subtypes contain a category of sites that have evolved differently from the other subtypes. From the branch-specific model, the subtypes’ results fell into two cate-gories. In subtypes C, F1, and G, a proportion of their sites were observed to have undergone positive selection, whereas all other subtypes had undergone purifying selection at thatsite (described herein as category I sites). In subtypes A and K, a proportion of sites was observed to have undergone purifying selection with positive selection having occurred in the other subtypes at those sites (described herein as category II sites).
For subtypes C and F1, two sites each were allocated to cate- gory I, while three sites were identified in this category for subtype G. Six codons were allocated to category II for subtype A, and 45 codons were allocated to category II for subtype K a Category I sites were observed for subtypes C, F1, and G, while category II The significant sites for each subtype were labeled on amino sites were observed for subtypes A and K. Sites are described using the HXB2 acid alignments using the known protein secondary structures b Site undergoing positive selection in at least one HIV-1 group M subtype as for gp120 (11) and gp41 (3) (Fig. 2 and 3).
gp120 structural amino acids. For the gp120 structure (Fig.
c Site undergoing positive selection as determined by Yang (29).
d 2), the majority of sites observed in both category I and cate- Site undergoing positive selection as determined by Yamaguchi-Kabata and gory II were structural sites not directly involved in known e Site undergoing purifying selection as determined by Yamaguchi-Kabata and gp120 functions. Within subtype K, however, a number of the f Site undergoing positive selection as determined by Yang et al (28) for their identified category II gp120 sites are functionally significant.
Amino acid sites 295N, 297T, and 334S correspond to a cluster g Site undergoing positive selection as determined by Yang et al (28) in a of nonlinear sites located on the outer domain of gp120 asso- separate analysis of subtypes A, B, and C.
ciated with the binding of the 2G12 antibody (25). Twenty-sixresidues spanning six segments of the gp120 molecule are in- jority of sites (86% for M3 and 88% for M8) through the env volved in direct contact with the host cell CD4 receptor (11), one of which (474D) was identified in category II for subtype The branch site models were implemented to detect any K. Sites 305K, 306R, and 322K, also identified as category II sites that have evolved uniquely to a particular subtype when sites in subtype K, are sites directly involved in or adjacent to compared to the other subtypes. The branch site results were sites directly involved in the switch from the CXCR4 to the significant for the branches leading to subtypes A (P ϭ 0.02), FIG. 2. Positions of category I sites (identified by ͉ for subtype F) and category II sites (identified by ∧ and ء for subtypes A and K, respectively) across the gp120-coding sequence. Secondary protein structures are marked above their coding sequences. Site positions are described using theHXB2 reference sequence. 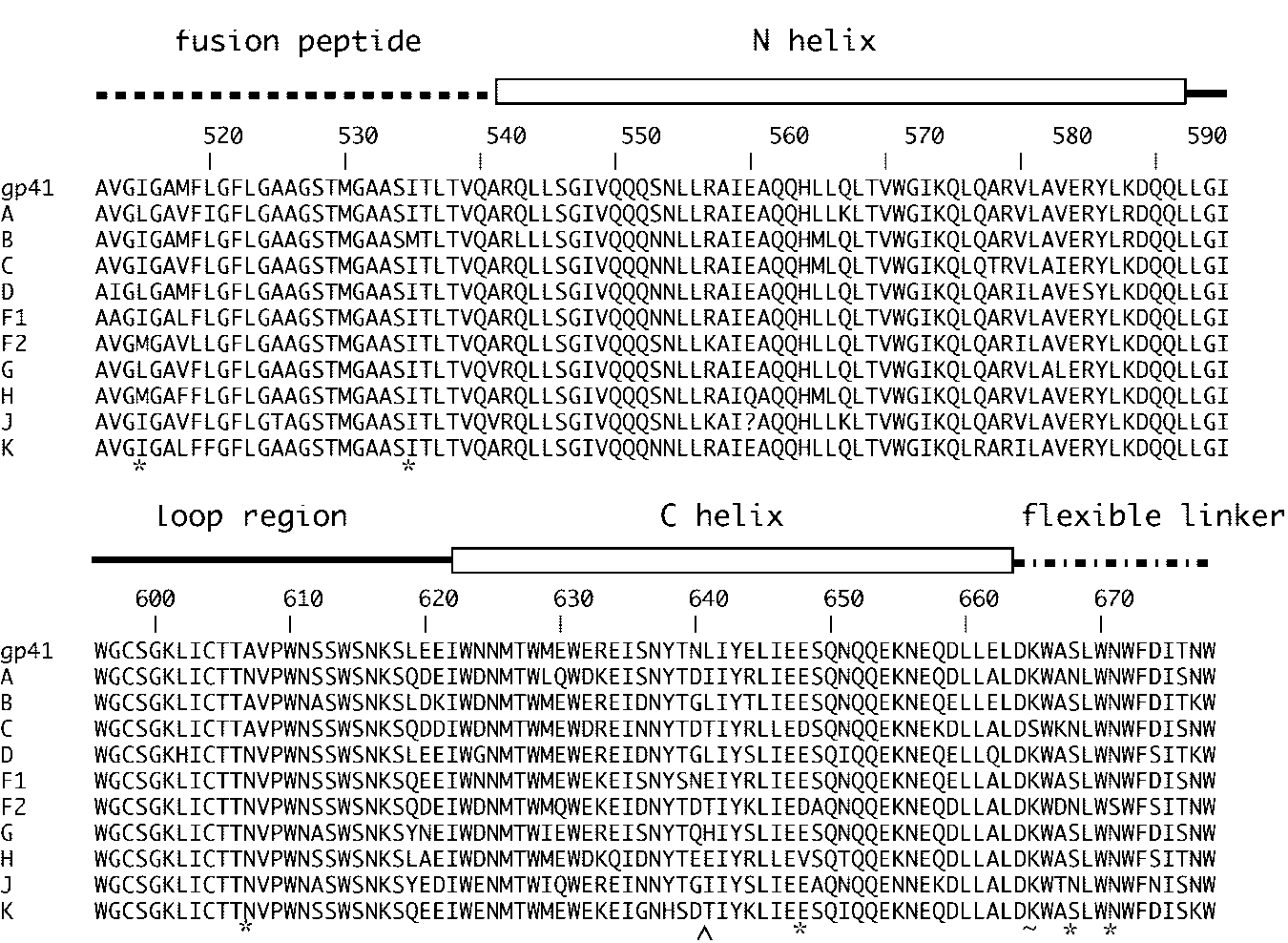