Section 2: Operation. 2-1
Procedures for Using Models 34-317 and 34-317-7000 . 2-1 Introduction
Section 1
Introduction
1.1 Introduction
These phantoms provide an effective means of monitoring the calibration of an ultrasound system. They contain precision-spaced groups of nylon monofilament targets, embedded in a medium that exhibits ultrasound responses similar to those encountered in human liver imaging. They have the same attenuation, scattering characteristics and propagation velocity as liver parenchyma. Also included are several sizes of simulated cysts, an encased cyst-like object, and solid tumor-like objects. The transducer rides along a flexible, smooth exterior surface that simulates human skin texture. Ultrasound systems can be checked easily for linearity, axial and lateral resolution, ring-down, sensitivity, depth-marker accuracy and registration. Multipurpose Tissue-Cyst Phantoms provide a consistent medium that gives repeatable quantitative responses not otherwise obtainable with human subjects.
1.2 Description
The phantoms have a series of monofilament nylon targets, 0.240 mm (0.01 inch) D. Two sets of targets form resolution group patterns (A, Figure 1-1). The first is 3 cm from one side of the phantom, 18 cm from the other side. The second group is 13.5 cm from the first side, 7.5 cm from the other. Thus, resolution measurements can be made at any of four depths. See Figure 1 for the Locations of the Following Internal Targets.
A. The resolution groups (A, Figure 1-1) have targets with center-to-center spacings of 5 mm, 4 mm, 3 mm, 2 mm and 1 mm for axial resolution tests. Each group has a second row of targets, nearly at right angles, to give simultaneous transverse resolution information. Spacings are 3 mm, 5 mm, 10 mm, and 15 mm. The axial rows are 10° from perfectly parallel and perpendicular to the phantom's outside surfaces to decrease acoustic shadowing of some of the monofilament targets by others. The distances from the phantom's surfaces are close to the focal zone distances of typical short, medium and long-focus transducers. B. When scanned from the top, eight rods (B, Figure 1-1) are spaced at increasing distances within the filling medium, starting at a distance 1 mm from the edge and increasing by 1 mm for each succeeding rod. This group is used for the rapid measurement of the transducer dead-zone or "ring-down" distance. C. One group of parallel rods, 1 cm apart in a vertical plane, (C, Figure 1-1) is scanned from the top for depth calibration, measurement of gain as a function of depth, and measurement of vertical linearity. This group also gives an indication of the acoustic beam shape with depth since the line target is generally displayed as a horizontal smear. D. One group of horizontal parallel rods, 2 cm apart, is used for horizontal calibration and linearity In the B-mode, both the vertical and horizontal grids should be imaged from all three scanning surfaces to measure the registration and linearity of the scanner and display. 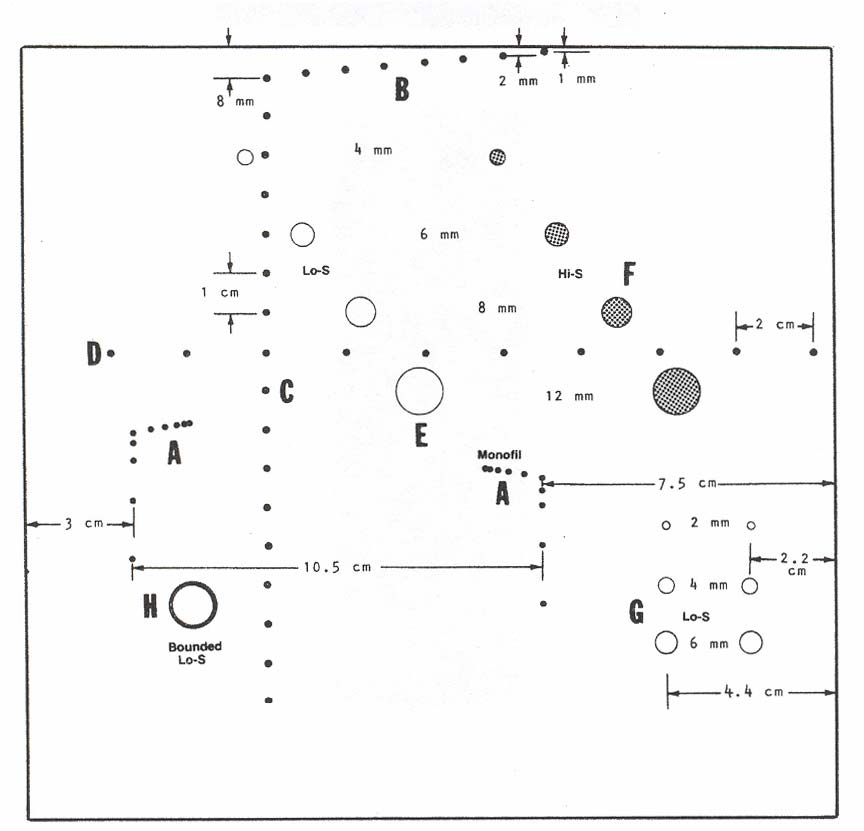 E. A diagonal row of four (Lo-S) simulated cysts (E, Figure 1-1) has cylinders of gel similar to the background filling material of the phantom. The "cysts" (4, 6, 8 and 12 mm D.) have no scattering centers (hence "Low-scatter" or "Lo-S") and are "transparent' to the ultrasound beam. F. Another row of four cysts (F, Figure 1-1), parallel to the first and of the same size, is filled with gel having more scattering centers than the background material. It is labeled "Hi-S" (high scatter) and simulates solid lesions similar to tumors. G. Six more "Lo-S" cysts are in two columns in the low right corner (G, Figure 1-1). Each column contains a 2 mm, 4 mm and 6 mm cyst. One column is at 2.2 cm and the other at 4.4 cm from the side-scanning surface. These are used with short-focal-Iength transducers and scanners designed for close viewing. H. One cyst-like object (Bounded Lo-S) (H, Figure 1-1) is encased in a highly reflecting plastic skin. It represents normally fluid-filled organs such as the larger blood vessels. The filling medium is a hydrogel containing a scattering agent that, at 72°F, simulates human liver parenchyma with respect to attenuation, scattering and propagation velocity over the range of frequencies used in ultrasonic scanning. Sealed into a sturdy plastic case, it requires little or no care. The scanning surfaces are made of soft plastic film that simulates skin. Introduction
DO NOT USE EXCESSIVE PRESSURE WHEN SCANNING. The plastic case withstands normal handling and washing with water and soap. Store the phantom at room temperature only. For transporting the phantom or storing it at temperatures outside the 32° to 150°F range, we recommend the optional Insulated Carrying/Storage Case 89-317.
Nuclear Associates 84-317 & 84-317-7000
Operators Manual
Operation
Section 2
Operation
2.1 Functions
The standard echo display level is an arbitrarily chosen pulse height on the oscilloscope display. It is for reference only, but should be the same for subsequent tests and should be recorded. For example, a 4 cm pulse height on an 8 cm high display might be used. 2) B-Mode and M-Mode Including Gray Scale Displays The standard echo display level is an intensity level equivalent to an arbitrary number of gray levels above the zero display level. The level should be consistent and recorded. For example, a 3 dB level above the display zero or threshold might be used, but in any case the system should be well below the saturation level. Any scanning motion should be specified, e.g., sector scan with an effective linear speed of n cm/sec or an M-mode time sweep of n cm/sec. Low gain settings can be used to image targets with minimum scattering. Higher gain settings will increase scattering effects and allow system performance evaluation at "clinical" settings. Two targets are said to be resolved if the amplitude between the two echoes decreases below 0.7 of the maximum amplitude of the weaker echo, which should be adjusted to the Standard Echo Display Level. If the amplitude drops below 0.3 between the echoes, the targets are said to be completely resolved. Two targets are said to be resolved if the display intensity between the two echoes decreases more than two 1.5 db gray-levels below the weaker of the echoes, which should be set to the Standard Echo Display Level. The dead zone of a transducer is defined as the distance corresponding to the time immediately after the transmitted pulse in which transducer reverberation and/or amplifier overloading causes or necessitates significantly reduced sensitivity or otherwise seriously alters the echo patterns received.
2.2 Procedure for Using Models 34-317 and 34-317-7000
1) The Time-Varying Gain Control (TGC) is normally switched off or set to a minimum for these Nuclear Associates 84-317 & 84-317-7000
Operators Manual

The vertical and horizontal rows of monofilament targets are scanned from all three (large) scanning surfaces. When viewed from three different distances, they help distinguish between horizontal and angular scale errors, depending on whether the scale errors are similar or different. 2.3 Optional Scanning Trough (84-318)
This shallow tray has a soft plastic bottom. It is used with scanning transducers designed for water-immersion use or for rounded transducers that make poor contact with the phantom scanning surface. Procedure
Cover the trough's bottom surface with a generous amount of scanning gel. Place the trough on the
desired scanning surface, making contact first at one end and laying it down carefully. Avoid air bubbles
in the space between the trough and the phantom surface. With the fingers, squeeze out the air bubbles
and as much of the gel as possible. Fill the trough with scanning oil or water, and position the phantom so
the trough is uppermost and horizontal.

2.4 Storage
The Multipurpose Tissue/Cyst Phantoms from Nuclear Associates should be stored at room temperature. Damage may occur if the phantoms are subjected to temperatures below 32°F or above 150°F (0° - 66°C). For transport outside of this range, the optional Insulated Carrying/Storage Case 89-317 is recommended. To minimize dessication of the filling gel, the phantom may be stored in a closed cabinet or case in which there is a jar or bowl filled with water. The high humidity will reduce dessication to a minimum.

Strategies for Employers to Help Employees Who Want to Quit Using Tobacco Using your company’s health plan to help employees and their families quit using tobacco Research shows that the most effective tobacco dependence treatment includes medication(s) and coaching/counseling - this combination can double or triple the employee’s chances of quitting successfully. Businesses that have in