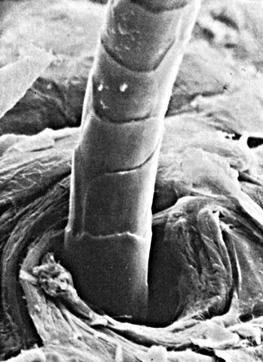 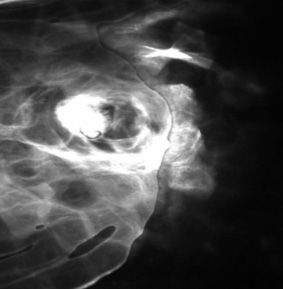 Conducted at the Center for Experimental and Applied Skin Physiology and Clinical Research Center for Hair and Skin Physiology of the University Clinic Effectiveness Study
Tests regarding the penetration of
caffeine from a shampoo formula
Following successful tests at the University of Jena on the hair
organ culture model regarding the effi
cacy of caff eine as a
hair growth stimulant in hereditary hair loss, the availability
of caff eine aft er hair washing was examined. In these tests,
the preferred method of caff eine penetration was particularly
important.
Previously, it was assumed that the skin forms a barrier against the supply of substances from the outside due to its protective function. Th assumed with regard to the hair follicle (Image 1). As a result, only external eff ects were attributed to the active ingredients in shampoos. Based on two novel measuring methods, the staff of the Center for Experimental and Applied Skin Physiology at the Charité in Berlin succeeded in proving that caff eine penetrates the hair follicle aft er just a brief processing time and remains detectable there aft er 24 hours.
During an initial test series, the caff eine-containing shampoo was applied to the scalp of the test subjects and left on for 2 minutes while a scalp massage was performed. Aft erwards, the excess product was rinsed off . To make the shampoo visible under the microscope, a fl uorescent marker substance was Using innovative laser scan microscopy, the researchers ascertained that parts of the shampoo penetrated the hair follicle aft er a processing time of 2 minutes and the subsequent rinse process (Image 2). e hair follicle clearly demonstrated fl uorescence in all of the test subjects. Over the course of 24 hours, fl uorescence decreased successively but was still Conducted at the Center for Experimental and Applied Skin Physiology and Clinical Research Center for Hair and Skin Physiology of the University Clinic Effectiveness Study
e caff eine-based shampoo was also examined for the fi rst time anywhere with a caff eine measuring probe during two additional test series. First the hair follicles were closed off with a special varnish to examine the penetration of caff eine via the skin. Aft er 30 minutes, caff eine was detected in the blood vessels for the fi rst time. Even aft er 24 hours, the caff eine applied through the During the second test series, the hair follicles remained open. During these tests, caff eine penetration accelerated signifi cantly, and the caff eine was detected aft er only 5 minutes (Figure 1). Both tests showed that caff eine preferably penetrates via the hair follicle and is therefore quickly available at Caffeine penetration
Figure 1: Caffeine penetration in skin and hair follicle over the course of 24 h e tests at the university clinics in Berlin and Jena point to the fact that caff eine shampoo may be an appropriate product to prevent premature hair loss, since caff eine from a shampoo formula can penetrate the skin and the hair follicle to create a depot eff ect with availability for up to 24 hours.
For more information, please visit www.caff eine-shampoo.com.

ROSSLYN SAFARIS HUNTING GENERAL INFO 2012 You can be assured of your personal safety here. No responsible operator will risk danger to his clients, and the troubles you read about in Zimbabwe are localised and mostly out of sight. Season : There is no legal restriction but we do not hunt much during the rainy season, November through March, though hunting can be good if the rains are n