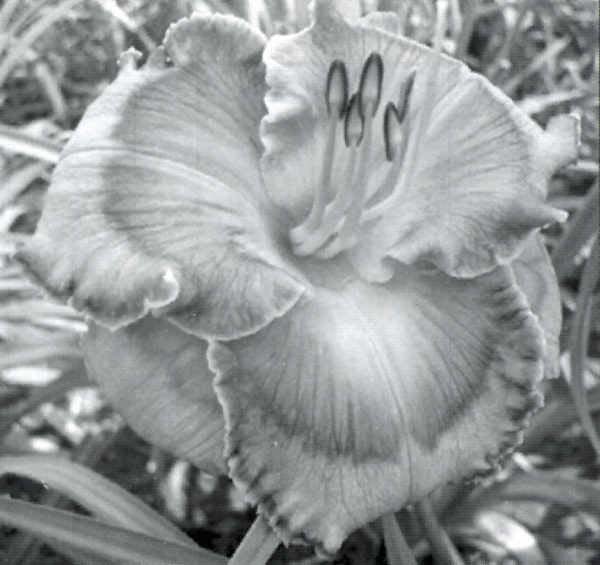 Conversion Technique - By Jack Carpenter
I have never used anything other than Colchicine circulate air around the treated crowns are in my opinion (DMSO has sometimes been used) to effect conversion. The use of DMSO did not seem to cause greater amounts of conversions. I am simply not familiar with the CRITICAL importance as crown rot may occur. Always several other things I have heard that have been used. carefully observe for beginnings of rot or disease attack. My method is to pot plants into 1 to 3 gallon containers Guard against fungus gnat infestations. The rest of the (set plants very high in the containers to allow for good process is now a matter of time and observation. air circulation and have soil adequately removed around Scraping or peeling old dead tissue from the crowns may crowns so that crowns are ABOVE soil level) and are in be necessary as the plant crown expands and an established and healthy condition prior to treatment. progresses following treatment over the next few months. The potting medium should be well drained and never CAUTION: Removal of dead or decaying tissue must be subject to being wet and "muddy" in nature. I have done with gloves or instruments and never with bare generally done my conversion work in the first half of hands. January. The procedure is to bring plants into active Observations: I never check the foliage (other than by growth for two weeks or more prior to time of treatment. I touch) as the foliage layer or zone may have been do treatments in a greenhouse that is heated and that effected, but not the pollen zone or layer. The effect on allows 85% or more of sunlight passage. Temperature the bloom is the only thing important to me for my during treatment in the greenhouse ranges from about 60 purposes of having the pollen in tetraploid form for usage degrees at night to around 75 in the daytime. Fans which give air circulation in the greenhouse are used. A cross- NOTE: In my experience in treatments in January some
sectional cut is made across and as close to the crown as plants have put up scapes within three to five months possible without removing the growth tip central area that from date of treatment giving the chance for checking arises from the center of the crown. The cut should be pollen size to determine ploidy. Tetraploid pollen will be made in as flat/level or horizontal plane as possible and half again larger in size than diploid pollen. Conversion as close as possible to the crown/root area, WITHOUT percentage for me has ranged from 10 to 30 percent of REMOVING the center tip of concentric leaf basal growth things treated. REMEMBER, COLCHICINE IS BELIEVED markings that surrounds the tiny tip growth area in the TO HAVE CARCINOGENIC PROPERTIES AND GREAT center of the crown. Following this horizontal cut I make CARE MUST BE TAKEN TO AVOID SKIN CONTACT five or six pie shaped vertical cuts into the crown- cuts that do not cut all the way into the center tip of growth, I hope you will have some degree of success with your but rather as close as possible to the center without treatments. I purchase my Colchicine from SIGMA actually cutting the center growth area. This type of vertical cutting into the crown is simply to give added ease of the Colchicine to penetrate well into the area from which the center grows and arises. These vertical cuts also allow for the bulging expansion that will soon occur from the activity of the Colchicine on the crown area. Once I have made the cut, a cotton ball is dipped in a 0.23% to 0.25% of Colchicine solution and placed on the crown surface and pressed gently several times to ensure good surface contact between the cotton ball and cut crown surface. An opaque plastic cup is inverted over the treated crown to cut down on evaporation of the Colchicine. The crown is checked from three to six times per day and with an eyedropper additional Colchicine is added to always keep the cotton ball well saturated. The treatment continues for three to five days (total) after which time cotton balls are removed and the entire crown is bathed with a disinfectant and fungicide mix. This fungicidal/dilute alcohol/dilute bleach (whatever you wish to use) mix may be applied again in a week. Fans to

The medical facilities at all ISU Events must follow the ISU Rules and the ISUmemorandum. This appendix is to be used as a guide for local organizers in assisting their medical staffto provide the necessary medical coverage of ISU competitions. Rinkside Medical Personnel and Equipment:1) All medical personnel at rinkside must be trained in emergency procedures andhave advanced cardiac and trau